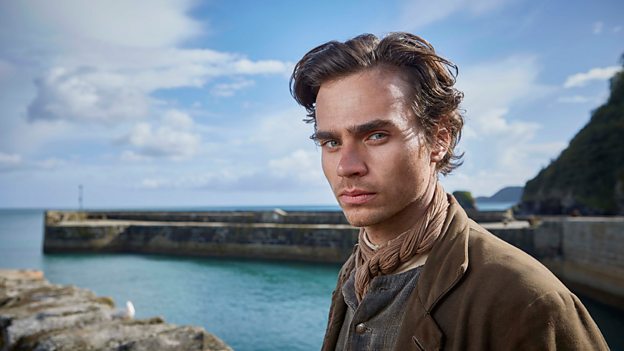 Filming the wrestling match was so much fun. It is a real joy as an actor when you have something so physical to get your teeth intoTom York

Category: BBC One; Drama
Demelza’s little brother, Sam Carne, gets into a few scrapes in this series of Poldark. Tom York reveals some of the drama we can expect to see, including a Cornish wrestling match.

"Sam agrees to a Cornish wrestling match with the brutish Tom Harry (Turlough Convery) for the love of Emma Tregirls (Ciara Charteris), who has promised to attend church with him if he wins. Sam agrees to fight in the hope of finally providing her with the chance to fall in love with Methodism in a way that he has. Filming the match was so much fun. It is a real joy as an actor when you have something so physical to get your teeth into.

"We had to wear the traditional Cornish wrestling jackets, which were our only weapons against each other, as you grab on to each other’s jacket in order to pin your opponent down on the ground. The object is to lift and throw your opponent so that he falls flat onto his back. It was exhausting. It was choreographed but we really wanted to get an authentic feel for it so we had a lot of room to play around within that and get really involved. It is a really long fight so when you see us panting and sweating there is no acting and very little make-up. It was a really immersive experience and it was great fun. From the reactions of the people who were watching it is going to be very exciting."

Tom reveals that this series kicks off to a very dramatic start.

"This series covers the time period where crisis is at the highest level it has ever been in Cornwall. The miners and local community find out that grain is being shipped away from this starving population because they can get a better price for it abroad, and so people get very angry and want to do something about it. For Sam, violence is not the way to get something done but people are starving…

Tom reveals what else is in store for Sam and his family this series.

"Sam is slowly starting to integrate himself into Ross and Demelza’s lives, although still with trepidation because there is still friction there due to different beliefs and ways of living their lives. Whereas he was dogmatic last year he is much more malleable this year and is trying to find a more generous approach to living.

"He wants to love his family and be a good man and his way of navigating his beliefs previously was inhibiting his ability to do that. After the great shock of the first episode he relaxes and begins to accept his family for the good people that they are."

Sam’s relationship with his younger brother, Drake, changes this year. Tom divulges a little about their bond and why that shift is necessary.

"A lot has happened and continues to happen with Drake and he is in a much more difficult state this series. So because of that, the dynamic really changes between these brothers. Sam’s natural instinct is to protect but he realises that it is not working and whatever he seems to do Drake just seems to fall further into this dark place. Sam has to let Drake just be, more than ever and allow his brother to deal with things by himself more than he is used to.

"That in itself is a real lesson Sam is learning, he always wants to do what is best for other people but he has maybe seen last year that trying to control everything for everyone doesn’t work so this time he is trying to let Drake figure things out for himself. He hopes that by giving him that space he will make the right decisions. It is a difficult lesson for a big brother to learn."

"In a big way it comes down to fighting for love this series for Sam. He fights with himself a lot because Emma, as you have seen from previous series, is not necessarily who we would all say Sam is destined to be with but you can’t help whom you fall in love with and Sam falls in a really big way.

"The relationship with Emma is what I am most excited for audiences to see because it is a beautiful one but also a difficult one that I hope people will be able to relate to. Emma represents so many things he wishes he could be and some things he definitely doesn’t wish to be… but he can’t help loving her and even though he knows she is probably not right for him he can’t stop his heart. I think a lot of people can relate to that struggle."