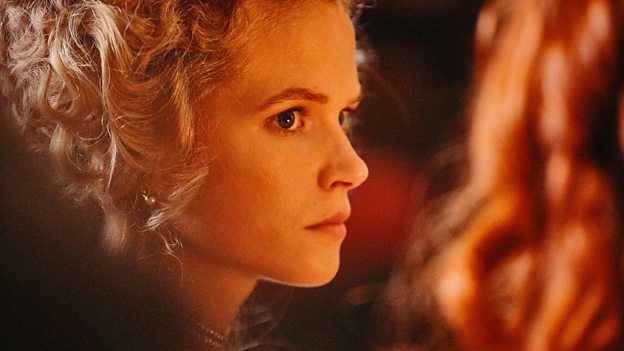 It is very refreshing to play a feisty female character and although Poldark is the male lead, the women are doing all of the work behind the scenes and we get to see thatGabriella Wilde

Category: BBC One; Drama
Gabriella Wilde admits that this series of Poldark is the most challenging so far for her character, Caroline Enys.

"This series is a dramatic rollercoaster for Caroline. Her relationship with Dwight goes through a lot of ups and downs. After suffering PTSD upon his return from France last series Dwight is now back to being himself again, so they are finally settled and happy. They start off by deciding to do something that Caroline is quite frightened of, but she takes the plunge and they take a huge step together. However, this ends in tragedy and it tears Caroline and Dwight apart. They have very different reactions and ways of coping with it. Caroline can’t be in Cornwall or around Dwight, she can’t face what has happened. She runs away to London and spends a large amount of the series trying to avoid her feelings but eventually she does begin to come to terms with everything, as heart breaking as it is."

Gabriella has enjoyed playing out the evolvement of her character.

"Caroline is ever changing; there are so many layers to her - what you see is not necessarily what you get with her. She is funny and witty and there was very much a light heartedness around her when we first met her in series two but as time has gone on she has revealed a compassion and kindness below it all and that is where her and Dwight connect. He is a deeply compassionate man but for him it is much more on the surface, he is a doctor and devotes himself to helping the poor which she certainly doesn’t do but he does see that side to her, behind all of the smoke and mirrors she puts up. If she remained solely sharp and controversial it wouldn’t be as truthful because people are not one-dimensional. As an actor it is a wonderful gift to be given a character who has a compelling storyline which allows for all of these layers of Caroline to be revealed in a very organic way."

Gabriella divulges more on the difficulties facing Caroline and Dwight this series.

"They overcome the worst tragedy a couple can but it is not a fairy-tale version, they struggle through it in their own ways. Dwight and Caroline have a real magnetism towards each other but they are very different creatures and when this happens they react completely differently. Caroline reacts in the only way she knows how to which is by running away and shutting down. That is not his practice at all. She is lucky because he is an incredibly good man and he doesn’t blame her, he sees behind what she is doing and why she has to do it and he waits for her, allowing her to go through her own process. Dwight is a man with great compassion and there is a deep understanding between them. Although they go through this incredibly difficult experience and she pretty much abandons him, he is still there for her."

"London is probably where she has spent most of her life so one side of her is very much at home there, more so than in Cornwall. She is a dynamic woman with multiple sides to her and London represents the side of Caroline we haven’t seen since the second series, before she meets Dwight. She slips back into that rather guarded person very naturally. It is her default setting and her survival mode."

However, a familiar face in London attempts to convince Caroline to face her pain rather than ignore it.

"Ross (Aidan Turner) is almost slightly haunting Caroline whilst she is in London, he isn’t allowing her to escape this thing she has to face and the grief she needs to go through. Underneath it all there is affection and an appreciation for Ross and what he is trying to do but at the same time, on the surface, whilst she does not want to deal with it, he is incredibly annoying and is a constant reminder of home and of what she is running from. The last thing she wants is to be reminded by someone like Ross who is quite direct. Caroline would usually manipulate people and talk around things but Ross doesn’t allow that, he knows her too well."

Whilst in London, Caroline meets an unscrupulous character who is new to Poldark this year and is intent on stirring up trouble.

"Monk Adderley (Max Bennett) is a pretty interesting character who comes in and causes a big stir and quite a lot of problems amongst the characters. Caroline enjoys a bit of controversy going on around her so she enjoys a character being rather contentious and causing some drama. But of course, if anyone was to cross someone she is loyal to she would stand up for her friends and is there for them. He is antagonistic towards everyone and he is a man without morals."

With the men in London causing trouble, Caroline’s friendship with Demelza is stronger than ever.

"Caroline and Demelza’s friendship really goes from strength to strength and whilst they come from entirely different backgrounds there is a recognition between these two as self-sufficient, strong women who share a sense of humour. They are incredibly bright women in a world run by men so they like to show off their intelligence and play the people around them and get involved where they are probably not expected to."

"It is very refreshing to play a feisty female character and although Poldark is the male lead, the women are doing all of the work behind the scenes and we get to see that. They are not pushovers by any means; they are the backbones. It is especially nice to be playing a female character who is written by a woman because she understands women so the detail to which the female characters in this show are written is spot on and so are the relationships between the women. Whilst this is a period drama, it is relevant to modern day life and modern women and the way those women operate within their marriages is all very relevant and that is down to Debbie being an incredibly smart woman and having the insight for that."

Gabriella reveals what she is most eager for audiences to see this series.

"On a visual level, I am excited for audiences to see London and the incredible sets for that. Due to the time period, there is also a change in the costumes and so the whole look of the drama has shifted this series. Even whilst we were filming it felt and looked different, so it is going to be quite thrilling to watch. On a more personal level I am excited for people to watch the journey of Caroline and that incredibly poignant story."