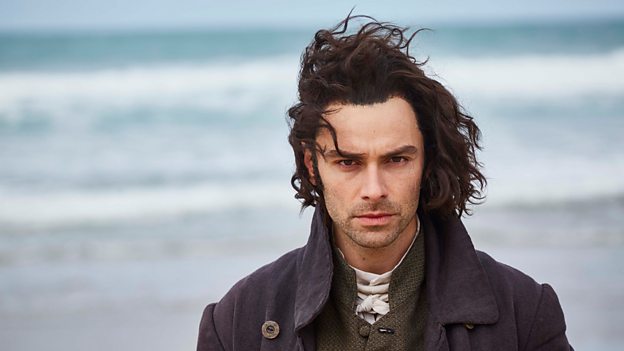 Emotionally Ross has always been inarticulate, he is not always sure how to talk about his feelings and this is difficult for him because he doesn’t know quite what to say.Aidan Turner

Category: BBC One; Drama
Ross Poldark embarks on a political journey to Westminster in the upcoming series of Poldark.

Aidan Turner explains how his rebellious character has taken on the mantle of responsibility...

"Ross realises that an opportunity to get to London represents the only way he can make change happen. Cornwall is too far away from where the decisions are made and although Ross has a lot of influence there and people listen to him, change doesn’t happen fast enough. He is starting to realise that people are attracted to his energy and they listen to him because he is this bridge between the working class and the gentry; he is well educated but he understands the plight of the workingman.

"With the likes of George Warleggan (Jack Farthing) setting himself up in Westminster Ross realises that he needs to go to fight these kinds of people, not just George but what George represents. It is an important time in Britain; William Pitt has just gone into power at the age of 24, making him the youngest Prime Minister ever, William Wilberforce is pushing the bill to abolish slavery and to close some of the poor houses, to end child labour, there is a campaign to increase wages and the standard of living and these were all things that Ross cares about but it can’t be done from Cornwall so Westminster is where he needs to be."

Aidan immersed himself within the history of the period as part of his research for this series...

"I have always found the political history of this period interesting, especially finding out about William Pitt and William Wilberforce and what they campaigned for. It’s hard to believe that there were so many people who were opposed to it all and who were trying to shut these conversations down. As an actor getting to make speeches about important matters like these, in this setting, it fills you with a sense of empowerment. You get an idea of what it would have been like at the time. It is surreal to be up there talking about backing Wilberforce in his bill to abolish slavery. It makes you realise that this all happened only a little over 200 years ago and that is really only a small blip in the scale of time.

"The actual slavery abolition act wasn’t passed until 1833 and even at that time there was huge opposition towards it, which is 40 years after Ross and Wilberforce present these ideas in the House of Commons. These men were also trying to eradicate capital punishment, which at the time was freely used for petty crime. I’ve done my fair share of research because when you are given these political speeches as Ross Poldark you want to know what is going on. It seems surreal to make those speeches and have people opposing what you’re saying. You just think, how could this not be the way forward, but that is what happened, these great people did get up and speak and rally support for these bills and thank God they did."

This series we see Ross and his persistent rival, George Warleggan thrust against each other in a very different environment.

"It is always fun working with Jack but it is especially fun for us as actors to do it this time opposite each other in the House of Commons. It was nice to see him across the room and just think we have made it all the way from the first series, throwing ourselves around bars and taverns and now we are sitting in the House of Commons staring each other down. Those kinds of moments are always great."

"We shot exteriors for the Houses of Parliament which was a lot of fun. It was fun to be in London and made it feel very real. That day was also with James Wilby who plays Falmouth and we have a really good working relationship. The characters of Lord Falmouth and Ross have a growing relationship themselves, which is always fun to explore. Ross didn’t fully trust Falmouth at the beginning, I think Falmouth said something like ‘Ross you are about liberty, equality and fraternity and I am about fraternity, less about liberty and nothing to do with equality’ but slowly they begin to agree on things and Ross turns Falmouth around. They have this father son relationship which was enjoyable to play out and James is a great actor to work with."

Ross has another rival this year, in the form of Monk Adderley (Max Bennett).

"Monk represents everything that Ross hates, he is corrupt and has likely acquired his political position through nepotism rather than hard work, Monk is mostly involved in politics for the social scene and rarely bothers to show up to the House of Commons. Ross and Monk immediately get off on the wrong foot and it is funny to play that situation where you just don’t trust someone from the get go - he doesn’t trust Ross and Ross doesn’t trust him. They clash straight away and whilst it is never really spoken about, they have this unsaid hatred for each other from the very beginning until it reaches a dramatic end."

Aidan reveals Ross’s emotional reaction to the events that unfolded at the end of last series between Demelza and Lieutenant Hugh Armitage (Josh Whitehouse).

"Ross is not entirely sure what has or hasn’t happened with Hugh and Demelza but regardless, this affects him a lot because he realises there were more emotions involved than if it was just a fleeting attraction. He sees that Demelza has fallen for Hugh and he understands what this is about because he has been through the same experience with Elizabeth. He knows it is complicated and that there is a lot at stake.

"Ross doesn’t want to lose Demelza, he realises how fragile their relationship is and how awfully he has treated her and what it feels like to be at the other end of that, which is something he has never experienced before. Ross sometimes need those wake up calls as he is not always aware how he effects other people and it isn’t until something happens where the tables are turned and he is confronted with that same action himself that he realises what he has done.

"Emotionally Ross has always been inarticulate, he is not always sure how to talk about his feelings and this is difficult for him because he doesn’t know quite what to say. At heart he knows that Hugh is a good man and Demelza is someone he not only loves but also greatly admires so it is a wakeup call for him and it is very difficult. He is confused by all of that and he feels scared to lose her and his family, so it is a very tentative time."

Aidan explains that audiences will see Ross and Demelza slowly working their way back to each other this series.

"This series they spend weeks apart whilst Ross is in London which was strange as they are usually together so often and during filming there were huge gaps where Eleanor and I didn’t see each other so it felt like it played out for real. When we did get back together, when Ross invites Demelza to London and they spend a week there together, it was lovely to reunite.

"It felt like their second honeymoon, they go out on boats and they go the Vauxhall pleasure gardens and to the theatre and meet up with friends and it felt like the early days of their relationship. They didn’t really get to do any of that in the first place so it felt like something was reignited there. It was nice for Ross to have fun again with Demelza, and to find that love again was important because that had been lost for quite a while. They have been through so much and they have allowed themselves to get really bogged down with life so much so that they forgot to have a good time in between but they find that again this series which was lovely."