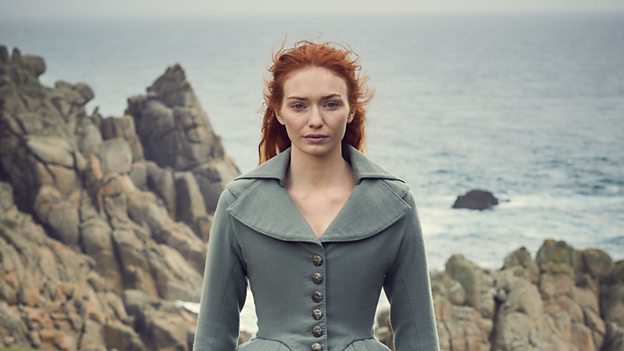 People like to see a truthful relationship on screen, and that is the heartbeat of PoldarkEleanor Tomlinson

Category: BBC One; Drama
Eleanor Tomlinson relishes the fact her character, Demelza, becomes such an independent woman in the fourth series of Poldark.

"With Ross having to go to London, Demelza takes charge at Nampara and so this series we see her very much on her own, being independent and having to solve everyday problems that come up. Ross has left her in charge of the mine, the farm and the children, which is a great deal for her to take on board, especially as a woman living in that time. So it is a very interesting storyline for her this year - it is all about independence and showing Ross how well she can do his job."

After the climactic end to series three, Eleanor talks about the struggle of Ross leaving Demelza and setting off to London.

"Their relationship was under strain at the close of last series, with Hugh and everything that happened there, so now with Ross going off to London things are difficult. Especially since he leaves before Demelza has the time to really tell him how she feels, that she loves him, and so she is particularly anxious about all of that. She misses him terribly but she writes to him often, keeping him in the loop. They didn’t have phones back then so she was only really getting a letter from Ross every few months which, of course, is difficult. However, Demelza is someone who just gets on with things so it is unsurprising that she is better than him at handling their separation; she misses him but she knows she has no choice."

Eleanor admits that she was pleasantly surprised by the fan reaction to the dramatic ending to last series.

"The fans are rooting for Ross and Demelza because that is who they love. They know as well as Demelza and Ross do, that they should be together and that they work well together. What was great was that the fans seemed to really embrace the fact that Demelza did go off with Hugh in the end; they had a positive reaction to that which I wasn’t expecting. They understood Demelza’s actions because Ross was not showing her respect nor was he leading by example and so most people have been very much ‘Go Demelza!’ which has been amazing. It’s wonderful to feel the fans supporting her.

"People like to see a truthful relationship on screen, and that is the heartbeat of Poldark, Ross and Demelza’s relationship being as realistic as the relationships you see today. It is quite modern in many respects."

Eleanor reveals that audiences will get to see Demelza venture to London this series, however this doesn’t go as well as she might have hoped.

"London starts off with the best intentions but it doesn’t work out. She feels insecure about how to behave and is constantly questioning herself. Whilst she has become somewhat used to dealing with the Cornish lords, going to London and dealing with these people is a completely different kettle of fish and of course, George and Elizabeth are there causing problems at every turn.

"Demelza quickly realises that London life isn’t for her but she is incredibly flattered that Ross wants to take her and it is actually the perfect gesture towards their relationship and towards their future. It shows how proud of her he is, wanting to show her off and to include her and not just leave her at home. However, Ross does not know how to handle Demelza getting this kind of attention in the city and as expected his quick temper kicks in…"

Whilst London life may not be for Demelza, she is extremely busy in Cornwall trying to play cupid to both of her younger brothers.

"This series we see Demelza trying to marry off Drake (Harry Richardson) to Rosina Hoblyn (Amelia Clarkson), which is all to mend his broken heart over Morwenna (Ellise Chappell). We also see Sam (Tom York) breaking his heart over Emma (Ciara Charteris) so there is a lot of heartache for the boys this series and Demelza feels that strongly. She is very protective over her brothers and she wants the best for them. They are not quite fitting in as they should but in a very Demelzaesque way, you really see the parallels between the siblings.
She wants them to be able to move on and find happiness and love but they are always getting themselves into tricky situations which we see literally from the get go, in episode one."

Taking care of the men in her life is a big part of Demelza’s storyline this year, which is why her friendship with Caroline (Gabriella Wilde) is even more poignant.

"Demelza’s relationship with Caroline goes from strength to strength. Caroline really takes Demelza under her wing when it comes to life in London and they are very supportive of each other. Demelza supports Caroline when she experiences a traumatic loss but also in her relationship with Dwight; having him back from the war and struggling with that transition. They become a little group who support each other and they become incredibly close, there is a lot of trust and love there."

Eleanor talks to us about the importance of playing this role, in this drama, at this time.

"Playing a strong female character in a drama written by a female feels like an incredibly fortunate and strong place to be. I feel like I am at the forefront of this wave of a new era which I hope is going to come and which will hopefully include better roles for women, more women writers, more women directors, and generally more creative opportunities for women."