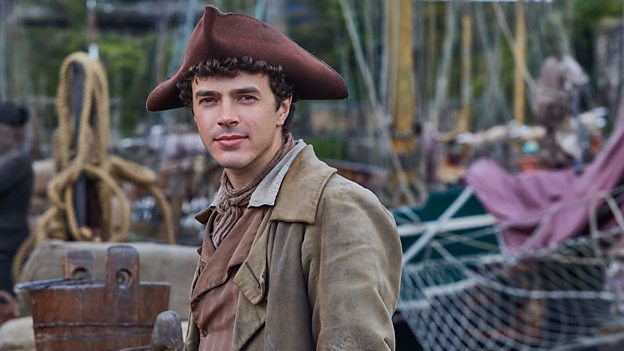 Debbie has written this character who is very sweet and beautiful but in his innocence and open heart he is not simple, he is not immature or childish, he is just quite pureHarry Richardson

Category: BBC One; Drama
Harry Richardson returns this year to play the romantic and free-spirited Drake Carne, but reveals a dramatic change in his character this series.

"When we meet him in the new series Drake is pretty deflated; he is grappling with serious heartache and pain over losing Morwenna (Ellise Chappell). He struggles with a choice of whether to put his true love behind him or to stay strong and chase after her. It is a very interesting struggle; one I believe people will relate to. Drake is trying to find where he fits in the world whilst attempting to find some momentum to help propel him out of this slump; he is desolate and unhappy."

Harry explains how Drake’s siblings try to help him through this difficult time in their own ways.

"Seeing her little brother so heartbroken, Demelza (Eleanor Tomlinson) does all she can to cheer him up. Drake is trying to put his feelings for Morwenna to bed because it is making it impossible for his life to go on. To that effort, Demelza persuades Drake into courting another girl, Rosina Hoblyn. Amelia (Clarkson), who plays Rosina, is incredible and it is very subtle and special writing from Debbie Horsfield because everyone in the town, including Rosina, knows what has happened with Drake and Morwenna, so navigating the start of a potential relationship through all of that is very interesting.

"Drake’s brother, Sam (Tom York), takes a bit more of a step back because whilst Drake is very sad he is also starting to make an independent man of himself, as is Sam and they are starting to grow up into men and realise that they can’t be glued at the hip as much. There is a real bond between them but there is a whole new respect that comes into their relationship this series. Sam understands that no amount of brother’s words can solve heartbreak.

"With Ross (Aidan Turner) spending time in London this series, the Carne siblings spend time together in Cornwall which creates a sense of closeness between them. They try to take care of each other but there is a sadness that stops them from really enjoying it. There isn’t much time for them to revel in each other because they are each grappling with quite complex problems."

"There is always hope for love, that is the thing that keeps Drake going, staying in town and chugging on and what is encouraging him to get his life together. He is hoping and praying that there might, one day, be some way he can be with Morwenna again. It is a very small town in which they all live so there are moments this series when their paths do cross, some of which are very painful and some of which are quite beautiful."

There were some very difficult scenes to film for Harry and Ellise this year.

"Morwenna is stuck in a very abusive relationship and seeing how Ellise embodied that and brought that experience to the table this series was harrowing. Scenes that involved that element were both my favourite scenes to shoot and definitely the hardest. I love being opposite someone or behind the camera and finding it difficult to watch or finding myself brought to tears when not even on screen, it’s amazing. Ellise has done something really special this year and she is going to shine.

"Everyone has really stepped things up this series; there is an incredible dramatic energy to series four. The characters are each dealing with much deeper complexities, there is a lot of very murky territory in love, especially for Drake and Morwenna because previously it was so beautiful and very much an innocent love and now it is so complicated. She sacrificed her life to save his so he can’t lose all hope or give up."

Harry has a lot of love for Drake and he tells us why.

"Debbie has written this character who is very sweet and beautiful but in his innocence and open heart he is not simple, he is not immature or childish, he is just quite pure. It is incredible to see, now that there are a lot more complications, how he handles himself in horrible situations. What you are like at the bottom of the barrel says a lot about who someone is and Drake continues to surprise me in the way he loves."

Harry took on a brand new skill this series. He talks to us about that eventful experience.

"I rode a horse on a cliff this series which was terrifying. I had ridden horses a little bit before but horse riding is a whole different thing in the Poldark world. There is a scene where I am riding with Eleanor, who is a very experienced rider, and my horse just knew that she knew what she was doing so he followed her which seemed to work. Before we start shooting there is an incredible horse camp where we go and learn and I had that before series three but we didn’t end up shooting on a horse. I don’t know what it is going to look like; I am just praying I don’t look terrified."

Harry reveals what he thinks makes Poldark popular amongst a modern day audience.

"It is timeless. The expression of love and trying to figure out relationships are relatable. In the contemporary world we try to calm everything down but we all feel these intense, period drama like emotions, so having that very heightened experience with waves crashing and violins playing conveyed on screen makes us feel like someone understands it all."