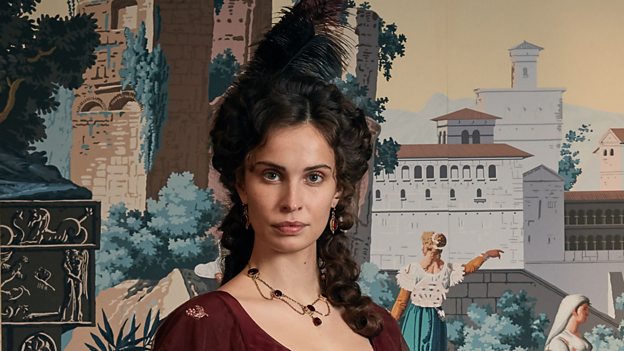 I always understood how George was viewed and why people didn’t understand why Elizabeth would marry him but for the first time this series I loved George.Heida Reed

Category: BBC One; Drama
Heida Reed has enjoyed her character, Elizabeth Warleggan, raising her social game and embracing her new position in society this series.

"This series is really exciting for Elizabeth as we finally see her come out of her shell and be a lady of society. Elizabeth was born to be admired, to charm people, wear nice clothes and have interesting conversations with the best of society and she is finally able to do that without having to worry too much about anything else.

"It has taken her a very long time to get there so she is really trying to enjoy and make the most of it, whether she is in London or Cornwall. She thoroughly enjoys being in London because it is presents the opportunity of raising her social game, incorporating new people into her circle and also seeing what is new fashion wise."

The later time period of series four, as well as the new setting of London, brings a great shift in the fashions and thus, costumes of Poldark this year. Heida reveals that she wasn’t initially too excited about this…

"One of my favourite periods of all time, visually, was the period we started in at the very beginning of the show when Ross (Aidan Turner) goes off to war. That style, with the tiny waists and the billowing skirts created such beautiful silhouettes. It is uncomfortable to wear that sort of style for a long period of time but it looks amazing. So I wasn’t, at first, super enthusiastic about changing the style because it was such a drastic change but the costume designer, Howard Burden, has done such an incredible job at making us look gorgeous and the corsets are different and in a lot of ways more comfortable so that was a nice change. I actually ended up liking the cut and fabrics way more than I anticipated."

Something else that was new for Heida this series was having a teenage son.

"Geoffrey Charles is all grown up this series and it was definitely a shock showing up to rehearsals, before series four, and meeting Louis (Davidson). Louis is older than he plays and is really tall which is funny because it suddenly made me feel very old. I have been so lucky with all of the brilliant actors who have played Geoffrey Charles. It’s great to get to move that relationship forward and it is fun to play a mother who is struggling with her teenage son who is getting up to all sorts of no good. It is a different beat to play and is something I haven’t done before.

"Geoffrey Charles is Elizabeth’s pride and joy and Debbie (Horsfield) and I have always talked about the fact that he is the only thing Elizabeth hasn’t messed up and hasn’t got anything to hide about. She loves him like nothing else in her life. It is obviously sad for her that George (Jack Farthing) will never embrace him as much as she would like him to. So the fact that Ross is in London to help out and keep an eye on him means the world to Elizabeth. They handle it very well and very delicately in terms of making their friendship about being grownups who are now friends who also both care for Geoffrey Charles."

Elizabeth’s husband, George Warleggan is in London pursuing a political career. Heida describes how Elizabeth has become his well-connected accomplice...

"They’re definitely a bit of a power couple and there is a recognisable Macbeth element there, just not as morbid. Elizabeth is very good at turning a blind eye to the more severe things that George gets up to. She sees what she wants to see in him and that is why she loves him so much. People may think that she is trapped in a loveless marriage and they may not understand why she has married him. At first it had everything to do with security but now there is a real mutual love, respect and understanding. They really get off on aiding each other in their rise to the top, within their world. She is the perfect right-hand woman, the perfect partner for him and he is brilliant for her as well.

"This series George and Elizabeth are very happy. It has taken a lot to get there and for the storm to calm but they finally get to be what they want to be and there is a great respect and love between them now. That was so much fun for Jack and I, who have been partners for three years on Poldark.

"We finally got to play a happy couple and it is a different experience. It is a lot of fun, especially when you do it with your friend who you know and who you have worked alongside for a such long time. Being in a happy relationship with George made me really care for them as a couple this series. For a brief moment they have everything they have ever wanted."

And Heida can finally see what it is Elizabeth sees in George...

"I always understood how George was viewed and why people didn’t understand why Elizabeth would marry him but for the first time this series I loved George. I know he doesn’t always do the right thing and that he isn’t always a stand-up man but there is something about him and about his progression as a character this series that is really great. He is definitely not one-dimensional, there are many layers to him and I hope that audiences see that. So much of what he does comes from a real love for Elizabeth and that is true and pure, he truly loves her and is terrified of losing her."