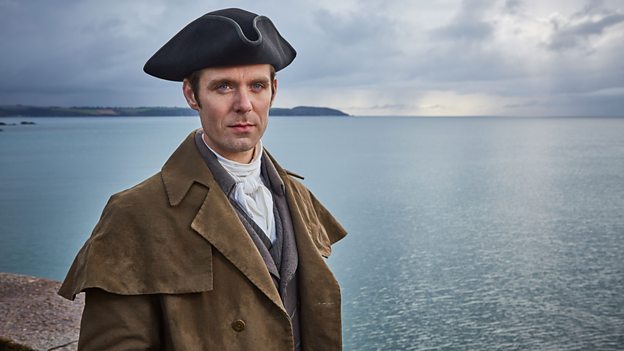 Category: BBC One; Drama
Despite his character, Dr. Dwight Enys, being a prisoner of war last series, Luke Norris reveals that shooting scenes for this series was even more gruelling.

"This series has been arguably harder to film than the last and probably the toughest so far. A lot of that is because the tragedy which Dwight and Caroline (Gabriella Wilde) suffer this series is one that is easier to personally imagine than being a prisoner of war and for that reason they were really tough scenes to film. Also because it is something which is likely that more viewers of the show have been through it felt like there was a greater pressure to get it right and not to misrepresent that experience."

Luke hints at what is in store for his character and his wife, Caroline, this series.

"At the end of the last series there is an uneasy truce between them. Things have improved for Dwight and Caroline this series and they embark on something together which is a real joy for Dwight but slightly more conflicting for Caroline. He has been through a lot and has always wanted a quiet life but it hasn’t exactly worked out that way so far. This finally represents an opportunity for that.

"However, the worst possible thing befalls Caroline and Dwight and they deal with it in very different ways which creates this cavern between them and a distance, both literally and metaphorically as Caroline decamps to London. Dwight arrived in the first series in the hope of making a difference to the community in Cornwall. After some bad decisions along the way he is now in a position where he actually is making a difference. Therefore, to just cut and run now isn’t in his nature and so they spend a while this series trying to work all of that out and dealing with their grief."

Luke tells us how Dwight’s friends Ross (Aidan Turner) and Demelza Poldark (Eleanor Tomlinson) help him through this difficult time.

"Part of the reason Ross conceded in the end in going for Westminster is because of the pressure that Dwight, as a friend, put on him as he believes it to be the right thing, to go and be the representative of those constituents. So Ross is helping but from afar. He is there for Caroline, in London. Demelza is effectively keeping the home fires burning for both Ross and Dwight, once Caroline is gone. She has been through similar experiences to what Dwight is going through and knows what it is to be apart from your partner so they get each other through that."

Luke tells us that it is always exciting, returning to Poldark and discovering what is in store for his character.

"It is lovely to come back and it is always exciting to see where Debbie (Horsfield) has taken it series on series. I stopped reading the books after the second series because I felt like Debbie was pushing certain characters in different directions and I didn’t want to be influenced by the books so it is always really interesting to find out what she has in mind every year. When you return to a role and you go through so much with that role you definitely become closer to them and them to you and so you start to react naturally in the way they would react to situations."

Finding out the trajectory of his character isn’t the only thing Luke enjoys about returning to Poldark. He also likes coming back to work alongside his on screen wife, Gabriella Wilde.

"I love Gabriella - she is great. I am going to visit her and her family out in the country with my family, which will be fun. I have been lucky enough to work with people I get on with and having a connection with someone can only help and it certainly makes going to work nicer. I look forward to filming days where we have a lot of scenes on the call sheet together."