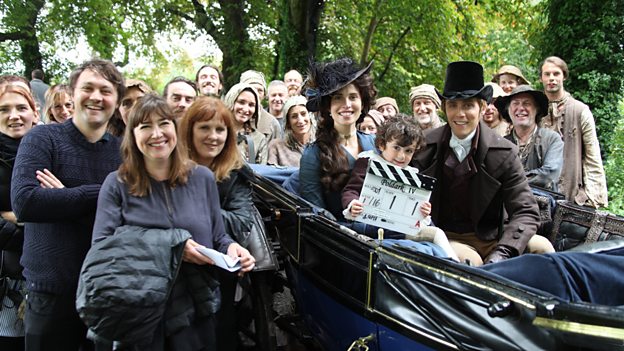 We have a host of exciting new characters, some new rivalries and challenges - and some old rivalries which escalate to the point of catastrophe.Debbie Horsfield

Category: BBC One; Drama
Debbie Horsfield gives her insight into the new series of Poldark and what is store for the characters...

"After the upheavals and threats to their marriage in series three, series four sees a major reconnection between Ross and Demelza as they realise how close they came to losing everything they hold dear. London calls for Ross, whilst Demelza holds the fort in Cornwall. We have a host of exciting new characters, some new rivalries and challenges - and some old rivalries which escalate to the point of catastrophe.

"The world of Poldark is always expanding, and as we move to London we encounter a new social and political scene and a host of new characters. Some of these are actual historical personages (Prime Minister Pitt, Attorney General John Mitford, William Wilberforce). Others, such as Monk Adderley, are vibrant and exotic new additions, who have a major impact on the lives of Ross and Demelza. As always though Ross and Demelza remain at the heart of the story."

She explains how Ross becomes involved in politics…

"Demelza said to Ross in series one: 'You cannot save all the world, you can only make your own small corner a fairer place.' Ross has spent the last two series trying to do that. But towards the end of series three he begins to realise it’s not enough to operate at a local level. The factors which are impacting the lives of his tenants, workers and families - food shortages, rising prices, unemployment, the effects of suppressive new laws - are not things over which he has control. He realises that in order to have a say in creating genuine change, at a national level, he must do so in the corridors of power in Westminster."

And of the relationship between Ross and George...

"The Ross/George rivalry continues through all 12 books of the Poldark saga and this series sees it intensify politically, commercially and personally. Ross and George have always had opposing views of how to do business and how to treat their fellow men. Series four sees them diverge even further, whilst periodically going head to head in the personal and political arenas. Ultimately though they find themselves unexpectedly in the same boat in the face of unexpected tragedy."

On the new characters...

"Monk Adderley, an MP and former Army captain, is famed for his duelling and his scandalous affairs. Reminiscent of Valmont (In Les Liaisons Dangereuses) he is utterly without conscience or loyalty and takes a twisted pleasure in wreaking havoc in the lives of others. Having said that, he does subscribe to a peculiar code of honour in relation to a particular incident which has catastrophic consequences.

"Back in Cornwall we also introduce the terrifying Lady Whitworth, mother of the repulsive Reverend Whitworth and scourge of her daughter-in-law Morwenna. We’re thrilled that Rebecca Front has joined the cast and is needless to say magnificent in her creation of this monstrous and overbearing creature.

"With the addition of new characters, new horizons and new conflicts, there’s plenty to get viewers talking. However, I suspect the Monk Adderley storyline is one which they will particularly relish. And as ever I hope the on going love story of Ross and Demelza will continue to engage."

Did Debbie enjoy writing series four and what, for her, makes Poldark an enjoyable experience to return to each series?

"This is a particularly turbulent period of British history - a time when we came close to having our own revolution (following those of American and France) and it’s been enjoyable to write about the unfolding dramas set against it.

"For me the on going Poldark saga never ceases to excite, challenge and engage. As a story with the portrait of a marriage at its heart, sometimes it’s made for uncomfortable viewing. Winston Graham was writing about a real marriage, not a rose-tinted starry-eyed version of one - but that’s what makes it all the more rewarding to bring to the screen. The reconnection between Ross and Demelza, the renewed passion, the forgiveness and redemption of their marriage has been hard won, and is therefore all the more to be valued and enjoyed."