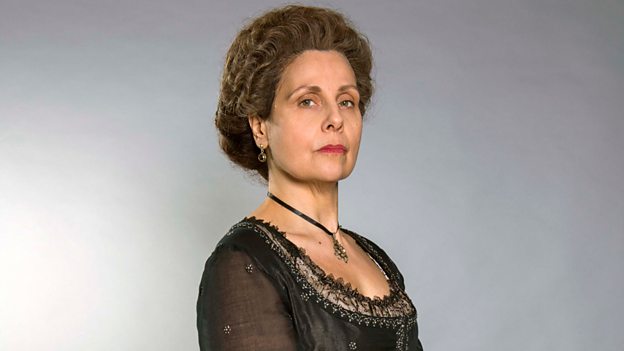 Lady Whitworth had to make a decision very early on to close her heart, she wasn’t going to have any emotion at allRebecca Front

Category: BBC One; Drama
Rebecca Front joins Poldark this series as the formidable mother of odious Reverend Osborne Whitworth, a role she admits has been great fun to play.

"Having watched the show as a viewer, my first thought was 'I hope she’s coming to sort Ossie out' but then of course, dramatically it is so much better that she doesn’t. It is more realistic that she knows full well the kind of man he is and chooses not to do anything about it. That was much more interesting to play but as I was reading the script for the first time, my heart was in my mouth thinking go on, rescue this poor young woman.

"Ellise Chappell plays the part of Morwenna so beautifully, she is a terrific actress. She plays her with so much heart and pain and knowing about her lost love and that she could have been happy with this wonderful man, Drake Carne (Harry Richardson), makes it all that much harder to watch. When I was watching it before I was involved I found it hard to watch the Morwenna scenes because they’re so painful but of course I had to. It must have been what so many women of that generation experienced. Christian Brassington plays Osborne as a monster but he as a person couldn’t be further from that - he is absolutely charming and delightful so again, it is a tremendous bit of acting."

Rebecca explains what it is like joining an already established drama.

"It is always slightly odd, I had the same experience when I joined The Thick Of It because it had been running for a series and a half but it is always quite strange when you have watched something and then you’re in it and you see things you didn’t realise were actually filmed in a studio or are not real. So it is a bit unnerving joining an established show because everyone knows each other but they are the nicest cast so I felt immediately welcome and Christian in particular is very friendly and hospitable."

So who is Lady Whitworth?

"Christian, who plays my on-screen son, and I had a chat on my first day of filming about what our family background would have been and what it would have been like when he was a child. We decided that it was quite likely that Ossie’s awful behaviour was learned from his dad in which case Lady Whitworth had to make a decision very early on to close her heart, she wasn’t going to have any emotion at all. If her husband was going to treat her badly she was just going to be hard-hearted and closed off and that is what she was like when she was raising Ossie.

"That is what she is like to me, a woman who has closed off all of her emotions and is completely shut down. You see tiny glimpses of her looking slightly upset but she doesn’t fully allow herself that emotion as she sees emotion of any sort as a weakness. As an actor you have to think behind your character and Christian and I had this really brilliant conversation early on which started off with how posh and wealthy they are and which spiralled into this whole discussion of what their family life would have been like."

Rebecca reveals that she and Christian also discussed the way Lady Whitworth might speak.

"We agreed that they obviously needed to sound like they come from the same family and background and Christian said they are probably the poshest family in Poldark. They may not have the most money and so they may not be the poshest now, in terms of what they have and own but historically they probably are and more importantly, they consider themselves the most aristocratic. Christian tends to use this elaborate, languid way of speaking which is part of what makes Ossie so unlikeable because he speaks almost like he can’t be bothered to talk to anyone else, he is so relaxed and confident which is brilliant and adds to the character.

"I needed to have a version of that but my character is anything but languid and relaxed so I went for something that is sort of disparaging. She is very well spoken but everything is sort of on a weary sigh because she is tired of dealing with all of these silly people. It is the kind of voice that puts your opponent on the back foot straight away; it is a voice that is used to barking orders at servants. It is designed to put people on edge and is all about her letting everyone know that she is superior to them."

And Rebecca divulges keeping still was a big part of how she played the character...

"I felt that because of her closed off, emotionlessness that she ought to be very still and I don’t often play characters who are that still, if you look at Nicola Murray in The Thick Of It she is constantly on the move and is quite twitchy and nervous and I wanted Lady Whitworth to have an absolutely steel like presence so I barely move my face or any part of myself. I sweep into the room and stare down my nose at people. Why would she have to move? She would never have had to rush anywhere, people will come to her and do things for her so she can just stand there and be and that is quite a powerful thing to play."

And did the corset, an integral part of the period costume, prove an issue for Rebecca?

"I was in Death Comes To Pemberley and War And Peace - they’re all within 100-150 years of each other so the costumes were not totally unfamiliar to me and that very austere look is something I have done before. I found the costumes beautiful in Poldark. Because Lady Whitworth is a wealthy woman, even though she is cold and terrifying, the costumes are still so gorgeous because they’re intricate and everything is beautifully embroidered and they’ve used all the finest materials. I have done quite a lot of corset work and these were not the most uncomfortable ones I’ve had to wear, it depends on the period you are filming and the style of dress and because these are empire line dresses the corsets don’t need to be crushingly tight so it wasn’t too bad."