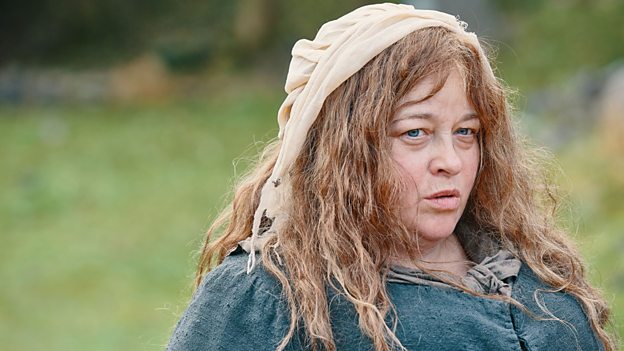 Prudie becomes more of a confidant for Ross this series and I have had more scenes to shoot with Aidan, which has been really funBeatie Edney

Category: BBC One; Drama
Beatie Edney loves being transformed into her character, Prudie Paynter, and not feeling the pressure of having to look beautiful on screen.

"I love not having to look fantastic, it is so liberating. It is really quite fantastic as an actress not to care about what I look like on a job, which is even rarer in a period drama. When I am turned into Prudie I have coloured teeth, I wear an awful wig, my skin and fingernails are all dirtied up and my make-up artist paints scars on my skin so it really is far from glamorous. It doesn’t even matter if I eat lunch in my costume and get food on it - it’s really fun. It is also great to have a middle-aged woman in a popular drama; there are so many young actors in this show that it is nice to represent the older generation and to be part of a successful show."

Beatie also talks about the perks of playing such a slovenly character.

"The weather this year was really quite terrible at moments. We had a big party scene to shoot outside, at night and everyone had learned how to dance for it but because of the awful weather the mud was really thick. So when everyone was ready to dance I mentioned that I thought it was very likely that Prudie, being so lazy, would just sit down… so I got to sit down with a hot water bottle whilst everyone else was dancing in thick mud. Thanks Prudie."

Beatie reveals that audiences will see a new side to Poldark’s troublesome and filthy housekeeper this series.

"Normally Prudie provides a bit of comic relief in the drama but this series it is a more melancholy and slightly more serious Prudie that you will see. She feels terribly guilty about encouraging the liaison between Demelza (Eleanor Tomlinson) and Lt. Hugh Armitage (Josh Whitehouse). Prudie did not quite realise the gravitas of the situation and rather, she thought it was just a bit of light hearted flirtation so when she does realise, she is stricken with guilt."

Beatie tells us about the bond between her character, Prudie, and Poldark’s leading lady, Demelza.

"It has been a long journey for Prudie and Demelza. At the beginning she was absolutely furious about this young person coming into her household - another mouth to feed when they were very poor and hungry - but Demelza has won her over, unsurprisingly since Demelza does most of the work! She makes Prudie’s life much better and Prudie really loves her, she is the daughter she never had."

Beatie and Eleanor share this wonderful friendship off screen as well.

"The whole cast are very close - I can’t think of a bunch of people I would rather spend time with and I get to spend six months of the year with them all. We all got together because Tom (York) was going travelling around the world for a few months so we had dinner to bid him farewell. Over Christmas, Eleanor and I wanted to go to Frome market so I took my new rescue puppy, Buttons, and we went and did our Christmas shopping and we had the most wonderful time. Eleanor got recognised when we were on the bus but she had to tell them who I was, people rarely recognise me."

Beatie tells us that this series starts off with a huge amount of drama and that these dramatic events force Ross and Prudie to grow closer.

"In episode one we launch into a dramatic scenario whereby Demelza’s brothers get into trouble with the law. Ross wants to keep this from Demelza because he knows she will be completely and understandably upset about it. Prudie definitely struggles with this as she doesn’t like keeping things from Demelza but she knows that Ross is right, that this will upset her in a big way. Prudie becomes more of a confidant for Ross this series and I have had more scenes to shoot with Aidan (Turner), which has been really fun.

"Prudie really loves Demelza but she also loves Ross and is loyal to him which we see even more of this series. The thing she does for him which is quite brave is that she speaks the truth because whilst he is her boss and she is a little frightened of him and in awe of him, that doesn’t stop her from being disapproving and telling him not to do this or that."

Having to film many scenes with multiple children, Beatie reveals some of her secret ways to keep them occupied on set.

"I have a lot more scenes to shoot with the lovely children this year. We had two wonderful sets of identical twins who play Clowance and who were really funny to work with. Prudie’s famously rubbish cooking gets a little bit better this year and she takes it upon herself to teach the children how to make pastry. One of the things about working with kids under a certain age is to give them an activity to do in a scene so as to prevent them from looking at the camera or getting bored and so making pastry was brilliant because you can do all sorts like building different models and shapes and you can get messy which is always funny. They also did these amazing portraits of the cast and crew, which were brilliant. My secret motivation is that Prudie is so lazy that she is even trying to get the children to do the work for her!"