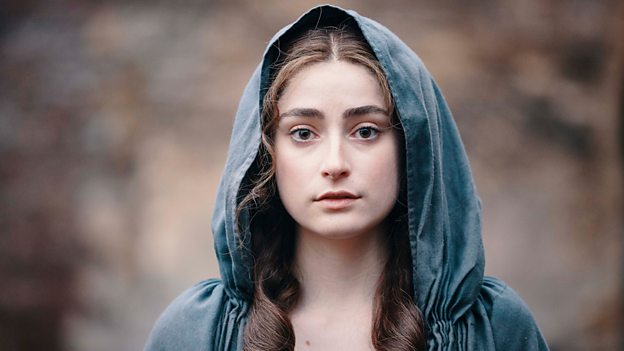 Category: BBC One; Drama
For Ellise Chappell returning to the role of Morwenna Whitworth, in the new series of Poldark felt completely different to joining the show last year.

"Coming back in the disparate headspace Morwenna is in now and looking at everything with a new lens was entirely new because she is in such a very different place at the beginning of this series than she was when she entered the show in series three.

"It is interesting that certain locations mean different things to her now. Cornwall, for example, at the beginning of series three is about freedom and independence for Morwenna and it represents this idea of exploration and an enjoyment of life whereas in series four that open space comes to represent more of an escape for her. Coming back and coming at it all from a completely different angle was really interesting."

With her character in a completely new and uneasy place in her life, Ellise explains how agreeable it was to return to the drama and to her friends.

"This was the first time I had ever returned to the same show or to the same cast and crew. It felt so nice because I didn’t have the nerves I had at the beginning when I was the new girl. I was fortunate to form wonderful friendships on series three and to come back and be able to hang out with everyone again and go for dinner all the time was so great. It is like a family and so coming back has felt very comfortable."

Ellise explains where we find Morwenna at the offset of the new series.

"Morwenna has just found out about this relationship that her husband, Ossie (Christian Brassington), has had with her sister and she thought she could use this information against him and hoped it would keep him away from her but that doesn’t work. So in that moment where he is advancing towards her she is in complete desperation, which is why she makes this terrifying threat against her son, knowing that he is the most important thing to Ossie.

"She has reached such a point of despair that she needs to ensure that Ossie believes that she will do this. So when we find Morwenna at the start of the new series she is still on edge and is deeply unhappy but she has this threat which acts like a shield between her and Ossie, allowing her to be a little bit bolder. Having that there, even though it is an awful thing to do, provides Morwenna with a small sense of security and control over her own situation which is pretty upsetting when you realise she has to go to those lengths to feel that way."

However, a terrifying new character joins the fold this series and takes away the small amount of control Morwenna had over her own life.

"Ossie’s formidable mother, Lady Whitworth (Rebecca Front) arrives in Cornwall and she is a fearsome woman. She psychologically abuses Morwenna; she has this control over Morwenna in a way that is difficult to see. She is a very powerful, scary woman who ends up gaining control over aspects of Morwenna’s life that she has so desperately tried to keep for herself, her son being the main one."

Ellise reveals what it was like to work alongside Rebecca and Christian and how they cope with some of the difficult moments.

"It has been a dream to work with Rebecca Front, having watched her on TV for so long it was really exciting but also nerve wracking. She is so lovely and so kind. With Christian and Rebecca you could not find two people who are further from the characters they play. Christian is amazing, I could not have hoped for a better partner to work with on those types of scenes because he is so generous and sensitive, giving and open and those qualities made it so much easier. Filming those kinds of scenes was very uncomfortable and upsetting but to do it with Christian made everything so much easier. Apart from all of that, he is such a funny and nice person so at the end of the day we’ll go for a drink and get out of that headspace which is really useful."

Watching Morwenna suffer at the hands of her husband, it is no wonder that audiences have fallen in love with the forbidden romance between Morwenna and Drake Carne (Harry Richardson).

"What I have been hearing from series three is that people really like Morwenna and Drake together and are rooting for them to be together which is wonderful. They are so pure, it is as simple as they love each other and want to be together and the fact that they can’t is not down to them, it is down to other forces pulling them apart.

"At the end of series three we see that Drake has left Morwenna the winter primroses and she has said ‘wherever you are, know that I love you’, so in that moment you can’t help but believe that there is still hope for the two of them as it is clear they still care for each other and have not forgotten one another. However, in those times and in that circumstance Morwenna is a married woman and there is no way out of it. The light for her is the notion that Drake still thinks of her and that he may still love her and for her that is important enough to keep her going. But there is always room for hope."

Ellise discloses the reasons why she enjoys playing this difficult role and what it has taught her as an actress.

"Morwenna goes on such a transformative journey in such a short space of time. From the beginning of series three her situation is so different to how she ends up and that was an amazing arc to play as an actor, and so coming back to that and continuing her story has been challenging but really great. Through playing this role, I have learned that I can push myself further as an actress than I thought I could. There have been times when I have found it really demanding but pushing myself to get into these difficult headspaces has been a massive learning experience and I am so fond of her. It definitely helps when you love your character and so coming back and continuing her story is satisfying."