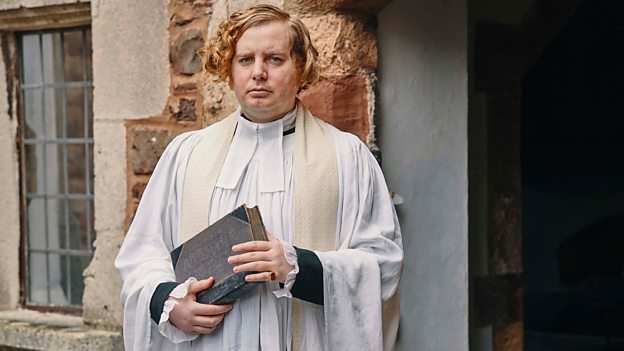 If he repulses people then I have done my job. You have to show the character truthfullyChristian Brassington

"I got much more involved in the stunts than I thought I was going to this year. I have done some horse riding for the show and this series I got to ride this beautiful big black stallion, which was wonderful. There was a point where our horse trainer, Mark Atkinson, turned to me and said ‘now fall backwards off the horse so you are hanging down by the horses legs and feet…’ I did exactly as I was told! It was very exciting."

Stunts aside, Christian explains what is in store for him this series.

"At the end of series three Morwenna (Ellise Chappell) stood up to Ossie and so the first time we see him this series he is slightly wrong footed and maybe not quite so sure of himself. He still exerts lots of over-confidence but he is slightly wary. His tryst with his wife’s sister, Rowella (Esmee Coy), has been discovered so it is not a happy household that he is living in. I wish I could say he has turned over a new leaf but he is just as despicable unfortunately, I don’t know if he has it within him to discover the error of his ways… we shall see."

Christian explains how he copes with playing such a loathsome character and what he enjoys the most about playing Ossie.

"Ossie is quite funny at points as he is rather flamboyant and ridiculous and so you have to try and enjoy that flamboyance and garishness. Actors tend to look for something they like about their character but there is not much about Ossie’s personality that you could like so instead I have to enjoy his theatricalities and that side of him, as that is what is fun to play and that also offsets the things which aren’t so fun about playing him.

"The parts I enjoy filming the most are certain scenes with Ellise where it feels like verbal sparring as that is a real joy to play out. However the flip side of that is, because I have so much respect for her as an actor and am incredibly fond of her as a person, it makes the difficult scenes slightly more difficult. It can be quite unpleasant to see someone whom you care for being upset. There are a few scenes this year which were tricky to film as Ossie causes Morwenna genuine stress and is just horrific towards her. If he repulses people then I have done my job. You have to show the character truthfully."

Christian was fortunate to work alongside another wonderful actress this year as Rebecca Front stepped into the shoes of his fearsome mother, Lady Whitworth.

"I was really excited when I heard Rebecca was going to do it because she is an incredibly talented actor and I am a big fan of hers. She is a lovely person although she is so mean and so scary in the show. Rebecca and I did some work on speech patters and how the two of us talk in a similar way and I hope when you meet Lady Whitworth people might start to understand why Ossie is the way he is. It is not an excuse, of course, but maybe it is a bit of an explanation. She is formidable and very defensive of the family name and maybe would have imbued in him this sense of entitlement."

Another aspect of the role that Christian enjoys is having to physically transform himself into Ossie...

"I have always enjoyed playing different roles and having to go through physical changes to fit the part even if it is a huge undertaking like Ossie has been. For series three gaining all of that weight was a lot of fun, I just ate what I wanted and it wasn’t particularly healthy. This year I had a clever nutritionist who wanted me to eat lots of quinoa and oily fish but 4000 calories of that every day is quite a lot of food. I also had a personal trainer who got me doing big weights so I have done it much more healthily this time but it was much harder putting it on in a healthy way. When you see series four of Poldark you will see that I am as far away from a professional athlete as anyone could be but I have got a new found admiration for people who have to eat that amount of food every day, it is really difficult."

Physically transforming into Ossie didn’t stop Christian from having the rarest of fan encounters.

"Whilst I was filming Poldark we had a couple weeks off and my wife was filming out in Hungary so I went to visit her. I was at full Ossie weight and with my Ossie haircut and this woman and her daughter recognised me and wanted a photo. I was in a thermal bath in Budapest…"