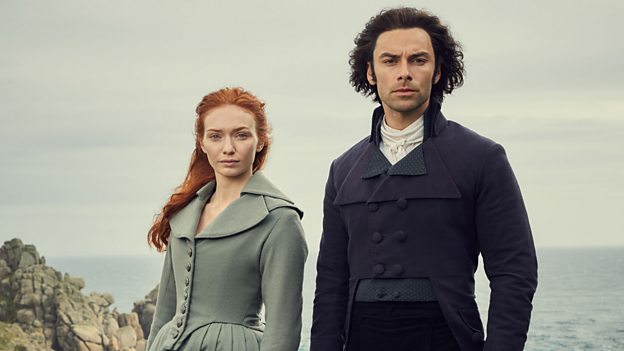 Ross strives to become a better man, but his dark and reckless streak is never far from the surface and will lead to him facing new enemies and suffering great losses.Karen Thrussell, Executive Producer

Category: BBC One; Drama
The wait is over: Poldark series four returns to BBC One with Aidan Turner as Ross Poldark and Eleanor Tomlinson as his wife Demelza.

Adapted by Debbie Horsfield from the novels by Winston Graham and produced by Mammoth Screen this eight part series was filmed across Cornwall, the West Country and, for the first time, locations in London.

1796: Ross (Turner) must defend Cornwall from an empowered George Warleggan (Jack Farthing), and risks everything he holds dear as he embarks on a political journey which takes him to the nation's capital. Demelza (Tomlinson) finds her loyalties torn, Elizabeth (Heida Reed) tries to strengthen her marriage, Morwenna (Ellise Chappell) continues to be oppressed by husband Reverend Ossie Whitworth (Christian Brassington), and the Enyses (Luke Norris and Gabriella Wilde) are tested as never before.

Powerful new characters enter the saga, Rebecca Front (War And Peace, The Thick Of It) is Lady Whitworth, Ossie’s formidable mother and Max Bennett (The Hollow Crown) is Monk Adderley, an unscrupulous society figure who is on a collision course with the Poldarks. Also back for series four are Harry Richardson and Tom York as Drake and Sam Carne, Beatie Edney as Prudie and Josh Whitehouse as Lieutenant Hugh Armitage, who remains deeply in love with Demelza.

Mammoth executive producer, Karen Thrussell, says: "We hope this will be our strongest series yet, with eight brilliant scripts from Debbie Horsfield, a whole new world of stories and our very wonderful cast. In this series Ross and Demelza will face new challenges and try to turn their backs on old ghosts. Ross strives to become a better man, but his dark and reckless streak is never far from the surface and will lead to him facing new enemies and suffering great losses."

Poldark is adapted by Debbie Horsfield (Age Before Beauty, Cutting It, The Riff Raff Element) produced by Michael Ray (Poldark) and directed by Joss Agnew (Mr Selfridge, Jekyll and Hyde) and Brian Kelly (The Loch, Outlander). Debbie Horsfield continues to serve as executive producer alongside Tom Mullens, Karen Thrussell and Damien Timmer for Mammoth Screen and Elizabeth Kilgarriff for the BBC.

To protect his treasured Cornwall, Ross must risk all he loves most to challenge George in new circles of power on a journey to the nation’s capital.

In the wake of her infidelity with Hugh, Demelza tries to re-commit to her marriage, but finds herself parted from Ross for much of the year. Will she succumb to temptation again or rise to govern in Ross’ absence?

Having won respite from George’s suspicions, Elizabeth looks to help George realise his ambitions and to have another “8 month child” before George can question Valentine’s birth again.

George suppresses his fears over Valentine to enjoy a more harmonious marriage with Elizabeth. However, he finds politics more of a challenge than he thought and seeks to solidify his power in more ambitious ways.

Recovered from his internment in France, Dwight finds his marriage to Caroline tested as never before.

With Dwight safely back in Cornwall, Caroline looks forward to settling into married life. Fate, however, has other plans.

Nampara’s loyal servant and an extension of the Poldark family, Prudie is increasingly pulled between her masters, trying to do what’s best for everyone - even if she doesn’t know what that always entails.

When Sam finds the things he loves under threat he must question the lengths to which he’s willing to fight for them.

Once a happy and carefree soul, Drake’s heartbreak has left him disenchanted with life. With a new romantic prospect, he must ask himself if he can ever forget Morwenna.

Trapped in an oppressive marriage to Osborne, Morwenna clings to the embers of past joys but shuts herself off from the world. However, having fended her odious husband off with threats of killing his son, Osborne seeks news ways of getting rid of her.

The antithesis of a holy man, Reverend Osborne Whitworth is the prefect hypocrite and a slave to deviant thoughts. Unable to find satisfaction at home, he seeks extra-marital relations, but his greed may prove his undoing…

Unable to give up his love for Demelza, Hugh finds himself wanting more. However, his uncle Lord Falmouth has other plans for him that would see him leave Cornwall and he continues to suffer from his internment in France.

Now a young man of fifteen, Geoffrey Charles is studying at Harrow school and free of his former constraints. His antics between terms, however, reveal a little of his uncle’s roguishness and his late-father’s propensity for trouble.

A known socialite and unscrupulous rake, Adderley has grown bored with life and hunts for greater thrills. The pursuit finds him locking horns with Ross Poldark however, and neither is willing to give ground.

Reverend Osborne’s mother, Lady Whitworth, imposes herself upon the Whitworth’s house and is another threat to Morwenna’s fragile peace…

Ross’ cousin, Verity is a calm bridge between the feuding houses, bringing insights for the betterment of both.

Ever hungry for power and profit, Cary remains at his nephew’s side, seeking to expand the family empire.

Having seduced Osborne and blackmailed him for a better life, Rowella struggles with the lifestyle her husband now provides. She embarks on a mission to enrich her household, overlooking the potential repercussions that may bring…

Recently ennobled, Basset continues his meteoric rise in Cornwall by looking to solidify his power and take on the old order represented by Lord Falmouth.

A longstanding figure in Cornwall’s political world, Falmouth represents hereditary powers and prejudice and it cost him Truro’s seat in the last election. With another election looming, will he have learnt from his mistakes?

Her flirtatious nature has ensnared many men. With Sam now one of them, a man for whom she has feelings herself, Emma is forced to question the life she wants for herself. Will she give up her freedom for the love of an honest man?

A sweet natured girl with an unfortunate history, Rosina has been dealt a raw deal by life. When Demelza takes it upon herself to do a little match-making, she finds hope again.

One of Ross’ oldest friends and the Mine captain of Wheal Grace, Zacky is well respected by commoners and gentry alike. In a world of uncertain alliances and through personal tragedy, he remains a welcome rock in the storm.