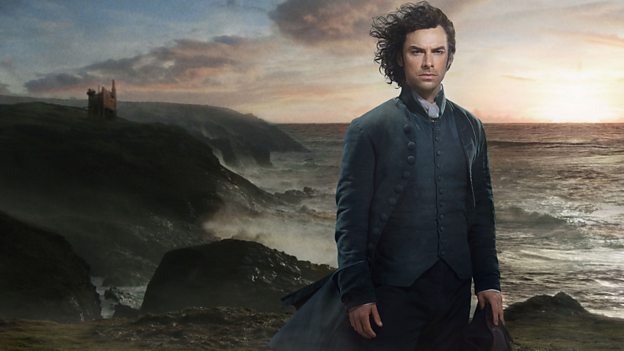 Cornwall is a massive part of the book and our adaptation. Nowhere else looks like it: the huge skies, four seasons in one day climate, the quality of light, it's rugged beauty scarred with mines, the powerful surging sea and the wind beaten moors. The elemental passion of the landscape and changeable nature of the place has echoes of Ross Poldark's personalityExecutive producer Karen Thrussell

Britain is in the grip of a turbulent crisis... falling wages, rising prices, civil unrest - only the bankers are smiling. It's 1783 and Ross Poldark returns from the American War of Independence to his beloved Cornwall to find his world in ruins.

Winston Graham wrote 12 Poldark novels starting with Ross Poldark in 1945 and ending with Bella Poldark in 2002. The internationally bestselling novels are set in Cornwall where Graham spent much of his life.

Robin Ellis, who played Ross in the first television adaptation of the Poldark novels in the 1970s, will be joining the cast for two episodes to play Reverend Halse.

Writer Debbie Horsfield explains: "Ross Poldark is one of literature's great heroes: a gentleman who is also a rebel, who has a keen sense of morality and social justice but without any priggishness or moralising. He's also a great romantic figure - caught between two women from two completely different backgrounds. A gentleman who marries his kitchen maid. A man who doesn't stand on ceremony, who doesn't play by the rules and often falls foul of authority. He has elements of Darcy, Heathcliffe, Rochester, Rhett Butler and Robin Hood - quite a combination!"

Executive producer Karen Thrussell says: "Cornwall is a massive part of the book and our adaptation. Nowhere else looks like it: the huge skies, four seasons in one day climate, the quality of light, it's rugged beauty scarred with mines, the powerful surging sea and the wind beaten moors. The elemental passion of the landscape and changeable nature of the place has echoes of Ross Poldark's personality."

Thrussell's lifelong love of the novels was one of the key factors behind this new adaptation and lead to the Winston Estate entrusting her and Mammoth Screen to bring the story of Ross Poldark to a new generation.
She continues: "Debbie Horsfield is one of our most acclaimed screenwriters, renowned for her original and contemporary series – including Making Out, The Riff Raff Element and Cutting It. She had never written an adaptation before, and had only strayed from contemporary life with Sex, Chips & Rock 'n' Roll. But we had a hunch that she would respond to this epic story of love and family. It was with some trepidation that we sent her the books, but she loved them.'

Horsfield says: "I'd never read the Poldark novels before so had no idea what masterly narratives they were and how exquisitely detailed and engaging the characters were - but it was no surprise to me to learn that the books have never been out of print. People who haven't read them are in for a treat.

"I was aware of, but didn't watch, the first adaptation in the 1970s. Since what we're doing is a new adaptation of a classic novel, rather than a re-make of a TV series, I opted not to watch the 1970s version on DVD until I'd written over half the series. It was interesting to see how much our version, based directly on the novels, differs from the 70s adaptation - although of course certain key elements appear in both.

"Very early on in the development of the series Robin Ellis got in touch to offer his good wishes for our success. I've always been a huge admirer of his work, both in TV and theatre, so the idea of finding a role for him was something we were really keen to do. He has a key role in two episodes - and needless to say he's absolutely brilliant!"

Says Robin Ellis: "Playing Ross Poldark was a very significant part of my life; it has had only a positive effect on my life and was an absolute joy. So I was thrilled at the idea of coming back to play a small part in this. Reverend Halse is a nasty piece of work, part of the establishment, and one of the gentry that Ross despises. It was a totally new experience to play this sort of character and one I relished."

Adds Thrussell: "Andrew Graham represents his father's literary estate, and he acted as a consultant to us at every stage of the process. He knows the novels inside out, and the characters of Ross, Demelza etc are still very vivid to him. He was able to tell us about his father's inspirations for the characters, and give an insider's insight into Winston Grahams Cornwall. He had an encyclopaedic knowledge of the original novels and was a great supporter of Debbie's scripts. He was a mine of information and insight."

Sadly this was also the final television role for Warren Clarke, paying tribute to the legendary actor Debbie Horsfield says: " One of my long-term ambitions had been to work with Warren Clarke - a wonderful actor (and fellow-Mancunian) I feel immensely privileged that Warren's final TV appearance was as the patriarch Charles Poldark - a character who (like Warren) dominates the screen, makes you laugh out loud and breaks your heart."

Based on the novels by Winston Graham, Poldark is an eight part series written and created for television by Debbie Horsfield (Cutting It), produced by Eliza Mellor (Death Comes to Pemberley) and directed by Ed Bazalgette (A Mother's Son) and William McGregor (Misfits). The executive producers are Debbie Horsfield, Karen Thrussell and Damien Timmer for Mammoth Screen, Polly Hill for the BBC and Rebecca Eaton for MASTERPIECE.

The full Media Pack is available to download as a PDF here.