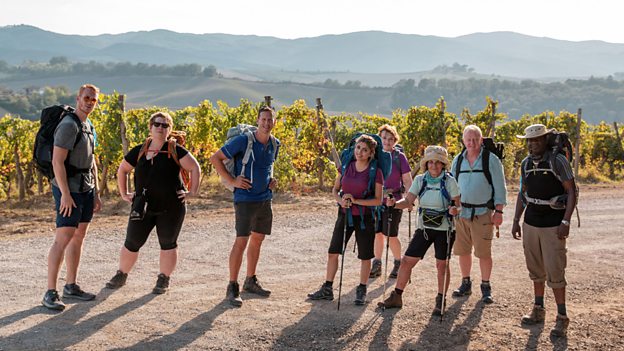 It was quite overwhelming in some respects. I felt I got what I wanted out of it in the end, which was time to think and talk about religion to figure out what I really think now.Katy Brand

Two main reasons - the chance to have a ‘philosophical break’ from everyday pressures and stresses in order to think about the big questions of life and the universe for the first time in 20 years. And to also basically have a job where I am required to walk a long distance every day - it was the only way it was going to happen, and I knew it would do me good.

Did you have to prepare in advance for the pilgrimage? What did you do?

We had to buy a lot of walking kit, so I got all that, and I also did some actual walking ahead of the start date. I also spent that time thinking about what I used to believe, and what I believe now. I wanted to get myself up to speed - a sort of internal check-up.

Have you ever walked this far before?

I have walked fairly long distances before, but not daily like this. I did walk an overnight marathon called The Moonwalk, which was just over 26 miles in a night. It wasn’t too bad from a walking point of view - I mainly just wanted to lie down and go to sleep.

Did you find it hard? A challenge? Fun?

I would say I found it all those things - hard, a challenge, and fun! The first day involved a very steep climb at slightly above normal altitude and I found that very difficult because I hate climbing and I’m no good at it - watching Greg Rutherford jog along the mountain like a little goat was somewhat humbling - I have never seen anyone so physically fit in real life! But after that, the walks were easier and more pleasant. The weather was unexpectedly hot though, and I am a dreadful sweater. It was fun when we were all together, stomping along, singing show tunes. I got dreadful blisters though, that covered 50% of my feet (I stupidly wore damp socks) and that was agony. I was instructed to rest by the paramedic in the end and I got terribly bored.

Tell me about your experience on the series?

It was quite overwhelming in some respects. I felt I got what I wanted out of it in the end, which was time to think and talk about religion to figure out what I really think now. It was hard at times - we were away from home for a while, and many of the hostels were not comfortable, with dirty beds and broken toilets etc, and also a lack of meals from time to time, but mainly we bonded so well as a group that it made those things much easier to cope with. We really stuck together. I had some great chats about religion, but about everything else too. And we never stopped laughing.

What was the hardest part?

Being away from home and family for so long. And also peeling away half my foot trying to remove a compeed plaster over a large blister - I just started crying and staring at my foot in horror, thinking: "I’ve got to walk 15km on that bombsite of a foot tomorrow."

Are you affiliated to any religion?

No. I was a very fervent teenage Christian at an evangelical CofE church, but not anymore. I don’t practice any religion.

If you don’t have any faith, are you atheist/agnostic? What helps you explain the world?

I am an atheist, as a result of doing the pilgrimage. I think the world is essentially unexplainable from a moral point of view (outside of the morals we have created for ourselves in order to function). The world is explained through the beauty of maths and science.

It changed my faith because I went from agnostic to atheist. It happened during the middle of the trip, when I realised I had no need of a god that exists outside of the universe. It was quite a sudden moment, and unexpected in many ways, but once it came, it stayed with me.

Has the experience changed you in any way?

Well, I know how far I can walk… it has changed my outlook on life because I no longer look for deeper spiritual meaning in everything, wondering if there is a god, and what it all means - whether there is a higher power or moral authority. I no longer believe there is, so it has given me a lot more thinking time and energy to spend on other things!

How did you get on with the other pilgrims? Was it a bonding experience for you all?

We all got on incredibly well from the beginning. When you gather a group of people who have all worked in media or entertainment professionally to any degree, you usually find that we have worked hard to get where we are and have also experienced a lot of discomfort along the way so not a lot fazes us. We’re also used to working with new people and getting along with each other even if we’re very different personalities, so I wasn’t expecting anything awful to happen in the group. That said, in fact we bonded even more than I was expecting, which was partly to do with how uncomfortable the trip was, and partly to do with the deep conversations we were having - every night at dinner, we would share really intimate things about ourselves. We trusted each other. Also, if you’re sharing bunkbeds every night, you’re not going to fall out with each other over anything trivial - we’re not mad! It’s partly self-preservation…

Have you stayed in touch with the other pilgrims?

Yes, we have a WhatsApp group and chat nearly every day. We have also all met up in different combinations according to who is available etc, several times since we got back. I’d say we’re friends for life to be honest.

Describe your experience meeting the Pope. What was that like?

I was quite conflicted about it. There are millions of decent, sincere, good Catholics around the world, some of whom will watch the show, and I did not want to disrespect them in any way. On the other hand, the Pope is the most powerful unelected man on the planet, and I didn’t want to treat it like we were meeting Father Christmas. In my view, the Roman Catholic Church has inflicted atrocities on people in many ways over the centuries, and it still goes on - it is engulfed in scandal right now. And women’s health was on my mind, when it comes to access to safe abortions and contraception. The Pope could change the lives of millions of people in an instant if he so chose. I kept that very much in my mind when I was in the room with him. It wasn’t a joke to me.

Would you do it again?

Absolutely, except with clean hotels and slightly easier access to hot food and working toilets…!