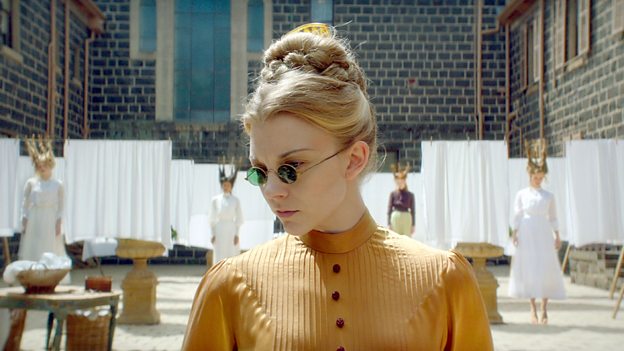 Category: BBC Two; Drama
A penetrating reimagining of the iconic and timeless Australian novel, Picnic at Hanging Rock plunges us into the mysterious disappearances of three schoolgirls and their governess on Valentine’s Day, 1900.

The complex, interwoven narrative charts the subsequent investigation and the event’s far-reaching impact on the students, families and staff of Appleyard College, and on the nearby township. Theories abound, long-held secrets are exposed, paranoia and hysteria set in, as in vastly differing ways the lives of our characters are changed for ever.

Tapping into our fear of the unknown, the series explores issues of repression and sexuality, freedom and suffocating respectability, speaks to notions of nationhood and identity, the old world against the new, nature versus order.

Nature is at the very heart of who we are. But can we ever control it?

The patrician headmistress, who rules Appleyard College with an iron fist and never a hair out of place. A formidable foe, Mrs Appleyard extols order, precision, perfection. Buttoned up from her boots to her starched collar - where is pinned a cameo in the image of her late husband Arthur - she rarely sets foot outside and believes firmly that a woman is only as good as her reputation. Appleyard College is set up in the service of this, producing well-turned out girls, marriage ma­terial. Mrs Appleyard’s own reputation, however, is something of a mystery. Is she really from the aristocracy or – as her accent sometimes suggests – did she grow up on a very different side of London? What will she do to protect her identity and her carefully crafted reputation?

The eldest and only girl in a family of five, born and raised on a remote cattle property in North Queensland, Miranda is at Appleyard College against her will. She’d much rather be on a horse than in a carriage, in bare legs than stockings, outside, than in. Strong-willed, natural and proud, she is not afraid to challenge the strictures of the age and the iron rule of her mysterious headmistress.

A senior boarder and prize recruit of Appleyard College. From a wealthy family (Irma’s mother was a Rothschild) Irma will be worth millions when she comes of age. From a world of privilege, she has more pretty dresses than everyone else at Appleyard College combined, and little aptitude for or interest in academics. When she sees Mike for the first time, on St Valentine’s Day, on arrival at the picnic grounds, he’s sealed forever in her mind as her be­loved. What will she do to be with him? Why – with all her family fortune and good name – has she been sent to a second-rate college in the middle of the Australian bush? And why can’t she remember what happened up on the Rock?

Marion’s first love is mathematics. A bright girl, hungry to learn, she is bored by Appleyard College and its emphasis on dresses and dancing. If she had her way she’d spend every avail­able minute in the company of Miss McCraw, the only one who understands the beauty of numbers, the thrill of an impossible equation. She is the daughter of a prominent judge, but her mixed race heritage and the fact that she was born out of wedlock has made her the sub­ject of derision and gossip in nearby Woodend.

The youngest student at Appleyard College. An orphan, she was separated from her older brother Albert (Bertie) at an early age when she was adopted by her wealthy guardian, Jasper Cosgrove. Young, wilful and utterly devoted to her room-mate Miranda - a framed photo­graph of whom she carries with her at all times - Sara has survived much in her short life and as such has the resources to withstand the blatant discrimination of Mrs Appleyard. The less Sara reacts to the punishments she doles out, the more it seems to enrage her headmistress. Why is this? What does she see in Sara that makes her carefully crafted façade slip?

The young French governess (in addition to teaching French and Dancing, she also takes charge of the girls’ wardrobes) is a romantic. She enjoys the company of the girls, who are closer to her in age and sensibility than any of her fellow teachers. She likes the servants downstairs well enough, particularly Minnie, but Mrs Appleyard doesn’t approve of frater­nising with the help, and Mademoiselle’s been brought up to respect these differences in class. Appleyard College is a lonely life for her really, but that’s no reason to settle for the Louis Montpelier, the town watchmaker. The only thing they have in common is the fact they’re both French and that isn’t the slightest bit romantic. But her fantasies turn to nightmares after the picnic (it had been Miranda, her “Botticelli angel” who petitioned her for the excursion to Hanging Rock), and the only way to uncover the truth now is to engage with reality… as terrifying as that may be. What has happened to Sara Waybourne?

Mrs Appleyard’s right-hand woman. Despite her loyalty to her employer and ambitions to be like her, Mrs Appleyard sees her acolyte as everyone else does: lumpen, ineffectual, insuffer­able. She has a habit of lurking in the shadows and is a busy-body, who isn’t above dobbing other students in to the staff to improve her own fortunes. She has a close relationship with her older brother Reg, with whom she shares her judgemental and disapproving attitude, and inflated self-importance.

The handsome nephew of Colonel and Mrs Fitzhubert, Mike has recently arrived to stay with his uncle and aunt at their summer house at Mt Macedon. It’s expected he’ll make a good marriage, but has a better rapport with his uncle’s uncouth, tattooed young coachman Albert than he does with any of the refined young ladies paraded before him… that is before he is utterly transfixed by the sight of Miranda, on her way up the Rock on the day of the picnic. He is the last person to have seen the girls alive. Why does he not tell police the whole truth?

Why is he determined to return to the Rock after they go missing? And indeed why was Mike dispatched to Australia? Is there a scandal in his past that will answer these questions?

Tanned and tattooed coachman in the employ of the Fitzhuberts. Loyal, straight-talking - an honourable, honest, hard-working man. “Dragged up” in an orphanage along with his younger sister Sara, who he hasn’t seen in years (and has no idea is so close by at Appleyard College). Since then he’s spent time with sailors, in lock-ups, drifted here and there. The Fitzhuberts treat him well. He’s working with horses. He can’t complain. Albert is comfort­able in his skin, content with his lot in life.

Mathematics mistress. Does not suffer fools. The only student she has any time for is Marion Quade, a brilliant senior who has the same interest and delight in problem solving as she does. She knows the other girls laugh at her for her ways - head always in a book, hair often out of place - but she doesn’t care. Originally from the Hebrides, she hasn’t written a single letter home since arriving in Australia, many years ago now, and suspicions arise when Greta disappears with the students on Hanging Rock.

Edith has the rare distinction of being both a know-it-all and the school dunce. Ungainly, un­charitable and unimaginative. While she is tolerated by her peers, she is wildly intolerant of others - girls who do mathematics when a “woman’s place is in the home”, the seniors who don’t include her in their secret whisperings, Sara and her unnatural devotion to Miranda. Neglected by her mother, who lives locally but visits rarely, Edith is prone to histrionics and tantrums.

Sergeant Bumpher leads the investigation into the disappearance of the Appleyard ladies. Having run from Melbourne to enjoy a quieter life, the inexplicable events at Hanging Rock take a heavy toll on a man devoted to science and facts. With little to go on, he grows increas­ingly overwhelmed by the pressure to provide the townsfolk with answers.

A country doctor who has been besotted with Mrs Appleyard for many years, the good Doctor is unwavering in his loyalty and eternally hopeful that she will one day reciprocate his advances. Mrs Appleyard allows their relationship to be less than formal, in exchange for his discretion in the treatment of her students. He is a valuable ally and asset in a town rife with gossip.