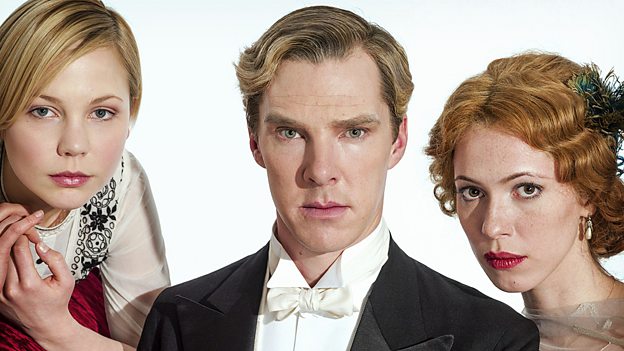 The idea to adapt Parade’s End came years and years ago when I first read the novels. I thought they would make the most extraordinary television..."Damien Timmer, Executive Producer

Parade's End is a flagship five-part drama adapted by internationally acclaimed playwright and screenwriter Sir Tom Stoppard (Empire Of The Sun, Shakespeare In Love, Anna Karenina) from a quartet of novels by Ford Madox Ford, widely acknowledged be one of the literary masterworks of the 20th century. It is directed by multi Emmy-nominated and Bafta-winning film maker Susanna White (Bleak House, Jane Eyre, Generation Kill, Nanny McPhee and The Big Bang).

Parade's End is set during a formative period of British history – from the twilight years of the Edwardian era to the end of the First World War. At its centre is English aristocrat Christopher Tietjens (Cumberbatch), his beautiful but wilful wife Sylvia (Hall), and Valentine Wannop, a young suffragette, played by Logie-nominated actress Adelaide Clemens (Silent Hill: Revelation 3D, Generation Um, The Great Gatsby).

It boasts a supporting cast including such acting luminaries as Roger Allam (The Queen, The Woman In Black) Anne-Marie Duff (The Virgin Queen, Nowhere Boy), Rupert Everett (The Importance Of Being Earnest, Hysteria), Stephen Graham (Boardwalk Empire, Tinker Tailor Soldier Spy), Clare Higgins (A Fantastic Fear Of Everything, The Golden Compass), Janet McTeer (The Woman In Black, Albert Nobbs) and Miranda Richardson (Made In Dagenham, The Lost Prince).

Executive producer Damien Timmer says: "The idea to adapt Parade’s End came years and years ago when I first read the novels. I thought they would make the most extraordinary television, and it struck me that although the novels are revered by critics and commentators, they aren’t particularly well known to a wide audience, which is such a shame. This is one of the great epic stories of modernist fiction and it struck me that if you were going attempting to adapt a masterpiece it would need a very special person to write the screenplay. I spent some time mulling this over and then in a moment of great bravery approached Tom Stoppard. Tom asked to read the books - a big commitment because they’re formidably long - and he loved them. And so he set off on his first adventure in television for decades.

"There’s so much to say about Tom’s adaptation; he's managed to be incredibly faithful to the spirit of Ford Madox Ford’s writing and much of the detail comes from the source material, but he’s also been incredibly bold, for instance the second episode is, in many ways, Tom’s invention. I think our version remains faithful to the spirit of Ford but also really crackles with the unique cleverness and insight of Tom Stoppard. At the centre the centre of both Tom's adaptation and the novels is this dance between these three wonderful characters – Christopher Tietjens, his wife Sylvia and Valentine Wannop; they are such important characters in 20th century fiction and Tom really does bring them to life magnificently.

"And the director, Susanna White, put so much time and dedication into finding out what this world was and then bringing it to life. She has extraordinary intelligence and stamina; and she needed both those things because this is a hugely ambitious piece of work. She manages to balance the pragmatic considerations of putting a big complex shoot together while always thinking first and foremost about the text. Susanna and Tom’s partnership has been one of the great strengths of this production.

"What Benedict Cumberbatch has managed to do is bring Christopher’s inner life to the forefront. He makes him utterly mesmerising, even when he just appears to be watching things unfold around him. He makes for a very interesting and unusual kind of hero. He has this very strong moral code, fierce intellect, and in lots of ways rejects the 20th century, exasperating the people around him; he has this huge brain but doesn’t want to engage with things that are happening and unfolding. He drives Sylvia to madness but somehow Benedict makes this incredibly accessible and really fascinating."

Executive producer Michele Buck adds: "Sylvia is a character who makes a huge impact. She’s an extraordinary woman and I think that Tom really fell in love with her when he was writing her. The thought of casting her was very daunting and then we had the great fortune to have Rebecca Hall read the scripts and want to do them. Rebecca is luminous and is able to turn on a sixpence. We never lose sympathy with her even though she does extraordinarily selfish things and is so provocative as a character; the combination of Sylvia and Rebecca is just sublime.

"I think an audience will identify with the central love story and see that these people were living through an extraordinary time when the world was turned upside down. And I think that’s something that resonates at any time. Our value system is very different to the world of Christopher’s and yet I think we can feel empathy for characters who are stumbling as they watch the world around them be transformed."

It is a Mammoth Screen production for the BBC in association with HBO Miniseries and Trademark Films and BBC Worldwide and Lookout Point, co-produced with BNP Paribas Fortis Film Fund and Anchorage Entertainment, and filmed with the support of the Belgian federal government's Tax Shelter scheme.

Mammoth Screen was formed in 2007 by joint Managing Directors Michele Buck and Damien Timmer. The company is now one of the leading independent production companies in the UK. Currently in production is a four-part series of Endeavour and a second series of Monroe for ITV1, Falcón for Sky Atlantic, The Best Possible Taste based on the life of Kenny Everett for BBC Four, and six-part comedy, Blandings, for BBC One.