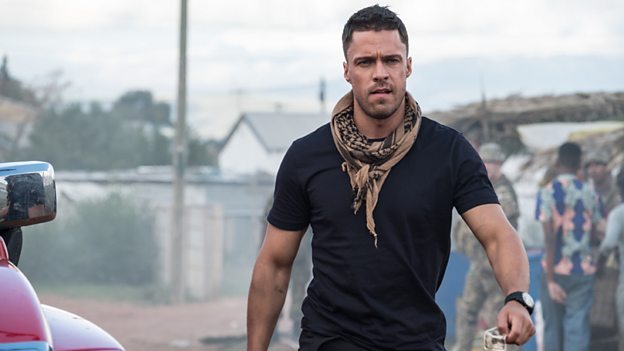 Both Georgie and Bones want to save people’s lives, and both of them don’t always take the conventional route towards doing so.Olly Rix

Tell us about your character, Bones?

He’s a tricky kind of guy. He’s abrasive, brash and yet highly competent as a soldier. He’s somewhat arrogant and intolerant of what he sees as pointless bureaucracy or anything that prevents him from doing his job. Ultimately, for all his naughtiness, he’s a decent man with a healthy disrespect for authority; he’s extremely focused on his missions and bailing out 2-Section every five minutes.

Our Girl has a big cast that had been working together for a while - did you feel like the new boy?

I think there was a very strong bond between the pre-existing cast, but Bones is Special Forces and initially separate from them. So actually, whilst I liked the cast very much, I kept my distance from them for as long as I could so that on screen we remained separate entities. That’s just my way of working but they are lovely though! They’re a fun group to be around, and when Bones gets closer to them as the story develops, I did enjoy spending time relentlessly screaming at them!

How did you find filming in the intense heat?

It was trying. It’s fine, fun even, when you are in a jungle context and screaming round shooting at enemies or jumping in and out of jungle rivers. But once you’ve got dress uniform on... it can be horrendous!

Georgie takes an instant dislike to Bones when they first meet. Does she become friendlier towards him?

They have a turbulent friendship. But one that I think becomes mutually, albeit grudgingly, respectful in the end. They do a lot to test one another - Georgie does things that endangers others and compromises missions, and Bones definitely isn’t a fan of that. However on a deeper and more interesting level, there’s a maverick element about Georgie that is driven by quite a restless desire to help others. Bones has exactly the same streak and so I think he quietly finds it very admirable. There’s a kindred-spirit sort of understanding in there somewhere, beneath layers of glaring at one another. Both Georgie and Bones want to save people’s lives, and both of them don’t always take the conventional route towards doing so.

Were you a fan of Our Girl before you joined the show?

I’ve already admitted to Tony that I hadn’t seen it beforehand! Years ago I actually auditioned for Captain James and met Lacey Turner a couple of times to read various scenes. Ben, of course, was a much better choice and the rest is history, but I never had an opportunity to see it after that. I was very aware of it being successful though and it was lovely to have a chance to come into the show in a different capacity and be involved. The entire team were lovely and I hope this season lives up to expectations.

Did you have to do any training for the role?

That was actually probably the best part of the job for me. We had two great military advisors in Colonel Nigel Partington and Sgt. Major Roger Dussard who spent time doing weapons training with me such as movement drills and generally discussing Special Forces and some of the ways they operate differently from the green army. It was a great education and they were faultlessly generous. I hope that it comes across in the performance and we do everybody justice in the portrayal of the technical elements of soldiering.