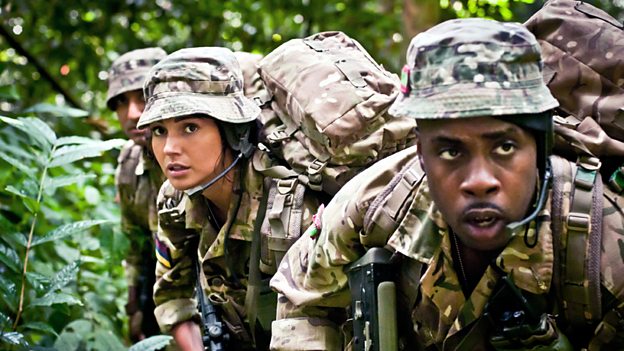 I just remember that all the women’s hearts on Twitter were broken that night.Michelle Keegan

How is Georgie coping after the death of Elvis?

She’s had six months out for compassionate leave and is now throwing herself into work. She’s definitely not over Elvis at all and you’ll see throughout the episodes that his death has really affected her.

Was it strange filming without Luke Pasqualino?

It was really, really strange. Luke and I started on the series at the same time together and it was so odd when he left. It was like a hole and I definitely missed him. We literally started the next episode the day after Elvis died. Luke left on a Thursday and on a Friday we started to film episode five. It took a long time for me to adjust as all our storylines were always based around Georgie and Elvis and the ‘will they, won’t they’ situation. So when he wasn’t there, I had to have a different mind-set. She still wears his engagement ring around her neck, which was my idea, as she loved him so much and he was the love of her life. I thought it was a nice idea to have a part of him with her at all times.

Did you get any reaction on Twitter to Elvis’ death?

Oh my god, I was in Malaysia at the time and it was 6am when it aired in the UK. I looked at my phone and it had gone crazy. What was great was that it hadn’t been released that Elvis was going to get killed so it was obviously a massive shock for the audience who follow the story. I just remember that all the women’s hearts on Twitter were broken that night.

Tell us about new character Bones?

Bones is played by Olly Rix who you first meet when he is undercover. They get off to a rocky start as Georgie sees him in Nigeria where he throws a child out of his way. But obviously goodie two shoes Georgie won’t stand for that and ends up confronting him. You soon see that he is the Head of Special Forces and has taken over Elvis’ role but he is totally different. He’s very angry all the time, very old school and isn’t emotionally led, he also hasn’t got a friendship with Captain James. However you see him and 2 Section build a relationship which is really exciting.

This series of Our Girl was filmed as one big block last year. Does it seem like a long time ago?

It seems like forever ago! We were looking at pictures the other day and this time last year we were in Nepal. I can’t believe it’s been a year, it’s gone so quickly but in a way it seems like such a long time ago. It’s very odd. I don’t miss the intense heat, it’s quite unbearable at times but your body does become used to it. As soon as you are in the heat we started sweating from 10am until the evening. Our t-shirts looked like we’d been in a swimming pool! But we just got on with it and it became the norm. We had no make-up, we just had tinted moisturiser. In South Africa it wasn’t too bad but in Malaysia we were sweating beads of foundation!

Have you stayed in contact with the 2-Section team?

Oh god yes. I can’t get away from them, I’ve been texting them this morning! We’re all mates, you spend so much time together and it’s so intense as you’re working six day weeks. We then also saw each other on our day off! So when we finished it was like going cold turkey! We didn’t know what to do with ourselves. The military advisers told us it was exactly the same in the Army.

How was filming away from home for eight months last year?

It was eight months and I came home in August for just two weeks. It was tough as you miss home and your loved ones but because of the job and the people I was with, we just got on with it. We were all in the same boat and if someone had a bad day, we would just pick them up. We all wanted the show to be good and had to throw ourselves in it. You know it’s not forever so it’s all an experience.