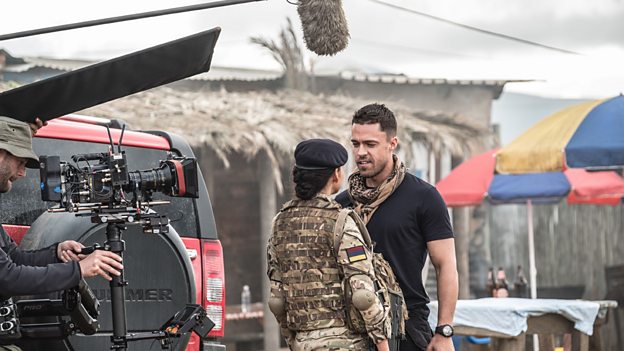 The fictional stories of our soldiers’ lives are at the forefront but we want what’s happening behind them to feel as authentic as possible.Tony Grounds

Tell us about the stories we can expect from the next outing of Our Girl?

The next eight episodes are broken into three tours; Nigeria is the first, where our Company are tasked to help with training and mentoring but get embroiled with Boko Haram when some schoolgirls go missing. The next tour is jungle training on the Belize/Guatemala border which is an amazing experience for our section but they soon discover the jungle is an unforgiving place. Finally, we are on the Myanmar/Bangladesh border following real life events and the plight of the Rohingya refugees fleeing across the border into the overcrowded camps.

What reaction did you receive after being responsible for killing Elvis?

They were very understanding. Apart from the death threats and the broken hearted millions!

Is it a big responsibility to bring these stories to screen as they are such important issues to highlight?

Yes, I spend a long time listening to soldiers and people from the areas we are working in. Of course we’re not a documentary but we do want to do the people of the area justice. We share their stories and their lives. The fictional stories of our soldiers’ lives are at the forefront but we want what’s happening behind them to feel as authentic as possible.

Tell us about the new Special Forces recruit, Bones..?

Bones is a remarkable soldier. He is flawed but dedicated to what he sees as his duty to the country and will undertake that duty as best as he can and won’t care whose feet he stands on to complete his objective. He is a Special Forces operative with a massive heart but he won’t ever let anyone know that.

What can we expect for Georgie and Captain James in this next outing?

Georgie is growing in confidence as a person and as a soldier. Of course she is heartbroken at the start of this tour but knows she is there to serve so will do that to the best of her ability. Captain James loves the team under his command and won’t ever let them down. But sometimes he makes the wrong call. This causes him to question everything from time to time.

Will there be any news of Molly?

Did you fly out to any of the locations to watch filming?

Oh yes. Being an Executive Producer, I was around for all of the shooting… although being such a long tour most of it was spent in a darkened room with the curtains shut, typing!