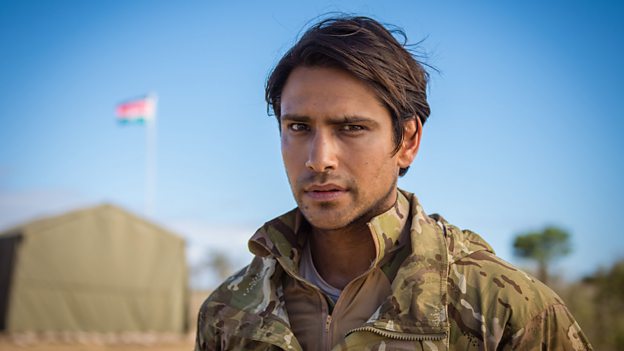 I think Elvis wants to make the world a better place, but he only wants to do this on his own terms.Luke Pasqualino

Elvis Harte is the Special Forces commander of the SAS group.

How did you prepare playing this character?

I didn’t have much time to prepare and I came straight from Sri Lanka to Cape Town as I was filming another job over there. I had 12 or 14 hours before I was thrown straight into boot camp. It was quite similar to how we did it on Musketeers, lots of drills and weapon handling, hand signalling without saying any words, it was really helpful. The military advisors we had, Nigel Partington and Roger Façade were a massive help so it was an invaluable few days.

Why did Elvis join the Special Forces? Does he see himself as a hero?

I don’t really know why he joined the Special Forces but I think he knows how good he is. I think Elvis wants to make the world a better place, but he only wants to do this on his own terms. He does have a lot of bravado, a lot of cheekiness and a lot of cockiness about him but at the end of the day, he gets his end goal finished and he gets you the result. He’s a bit of a maverick.

What does Elvis see in Georgie?

What doesn’t he see in Georgie? He finds her absolutely beautiful but she isn’t just falling at his feet. I think he likes that and the fact he has a bit of a challenge, it’s why he keeps going back. That’s why he ends up falling in love. She’s a strong woman and someone to tame the beast that is Elvis.

It was amazing filming in South Africa and Cape Town has now become one of my favourite places I’ve ever been to, let alone worked. I worked with such an incredible group of people and it was absolutely beautiful. It will go down as one of the best times I’ve ever had. It wasn’t really that bad filming in the heat; I’m used to sweating in costumes due to The Musketeers, sweating away in leather. A lot of things we did in South Africa were running, jumping and crawling around so the heat did take its toll. But the crew were really good with water sprays and cooling us down with wet towels on our necks! It was bearable but I’ve definitely worked in cooler places; that’s for sure!

Did you get to film many action sequences? Do you enjoy filming those scenes?

Loads! My first day on set was shooting a huge action sequence from episode two, so I got thrown in right at the deep end! But I enjoy filming those scenes; they are so much fun and get your adrenaline pumping.

Did you get to ride in a helicopter? If so, what was it like?

I did, a few times and it didn’t get boring at all. It was one of those helicopters where it didn’t have any sides; you were completely exposed so that was great fun. I shared that experience for the first time with a great bunch of people.

Did you have much time to explore or were you filming for the entire time?

Yes, we had quite a few days to explore! Me and a bunch of the boys went to Robbin Island, the beaches. Went and climbed Table Mountain and Lion’s Head, went down to the waterfront, it was such a cool place with so much to do. You are rarely stuck trying to find an activity! It’s a great place and I really recommend it.