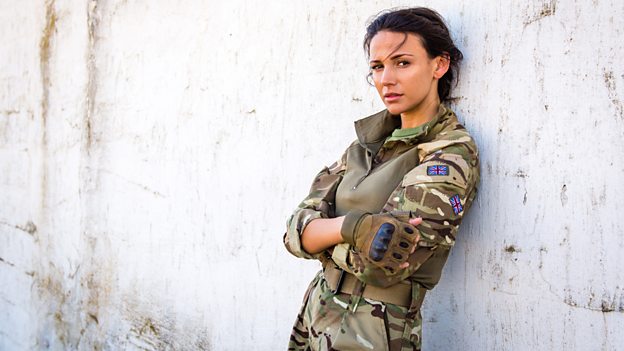 I met up with a lot of female medics, they told me their stories and you find a new found respect for what people in the Army actually do.Michelle Keegan

Georgie is an experienced army medic. She is good at her job, very professional and she knows what she wants in her life. Georgie puts her work first and not afraid to get stuck in, especially with the lads as well. I wouldn’t say she is the alpha, but she doesn’t take anything lying down.

Does Georgie see a lot of action?

Yes, we do a lot of stunts; I did a few of my own which I really enjoyed, including going up in a helicopter and getting flung out of cars by my hair. It’s been very physical and I found it very liberating.

It wasn’t as bad as I thought it was going to be! I was a bit worried because I’d heard it was quite strict due to the army and what they have to go through. It was great fun and a bonding exercise for everyone to get to know each other before we flew out to South Africa.

Did you get to handle any weapons?

Yes, they are so heavy! I didn’t know how to hold a gun when I first started. We went to a shooting range in South Africa when we first started and we had to shoot numerous guns. It was scary and really loud and I’ve never seen a real gun in my life, it was really intimidating.

Is this second series of Our Girl a new story?

Yes it’s a fresh story. Captain James and a few of the lads are back from the first series however there is a brand new feel to the show. The storyline is different and its shot differently. It also gives a nod to the first series which is nice.

Did you have a good time in South Africa?

I loved it. I was really worried about that as I’m not too good in heat! But as soon as you are out there you acclimatize and we were very lucky as we were out there filming in March and the last series was filmed in January which would have been boiling. Luckily it cooled down by the time we were out there. I was working six days a week, in every single scene, so I had no time to miss home. It was one of those experiences where you look back and think what an experience of a lifetime, I loved every single minute.

Did you do some specific research for this role?

I had to learn all of the medical side to the role and we had an advisor on set to help. I also met up with a lot of female medics, they told me their stories and you find a new found respect for what people in the Army actually do. I just don’t think I’d be able to cope in the army; it’s very full on and difficult. The stories I have heard are heart breaking.