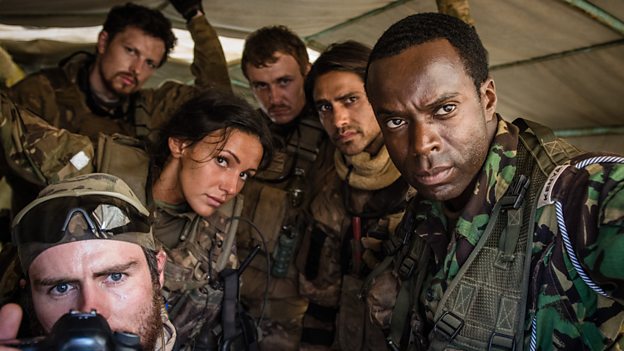 The soldiers are thrown into the maelstrom of seeming chaos and desperation of a huge refugee the size of many cities and although they have experienced war none of them had ever faced anything like the situation they are confronted with on this tour.Tony Grounds

How does this second series of Our Girl differ from the first?

It's both daunting and exciting having a new Our Girl. Georgie Lane, having tours under her belt, is a more experienced and confident soldier than Molly was and this give the piece a more grown up feel. Attached to 2-Section Lance Corporal Lane knows how to deal with squaddies and can give as good as she gets.

Why did you set this series in Kenya and Manchester?

Once Michelle had been cast it seemed logical to have Georgie Lane come from Manchester and although the character obviously isn't based on Michelle, it was good to write for her voice.

Having researched the situation on the Kenya/Somalia border it felt an incredible setting for a drama. Fraught with danger and in a land that feels so different, Michelle is the medic with the army on a humanitarian tour. The soldiers are thrown into the maelstrom of seeming chaos and desperation of a huge refugee the size of many cities and although they have experienced war none of them had ever faced anything like the situation they are confronted with on this tour.

Will 2-Section be back and are there any other new characters to look out for?

Yes, there are familiar faces within 2-Section but also a raft of terrific new characters. Having Luke Pasqualino and Royce Pierreson joining the cast has been wonderful. Royce being a doctor at a Manchester hospital was left in the UK while Luke, being a Special Forces Operative, was able to come 'on tour' to Africa.

What changes will we see in Georgie across the series?

All our soldiers are changed by the short tour; things seen can never be unseen. They return to the UK different people, none more so than Michelle's character, Georgie Lane.

What do you hope viewers will take away from this series?

Hopefully the audience will hold Georgie Lane's hand and go on this incredible, unforgettable journey with her.