Our Dementia Choir with Vicky McClure 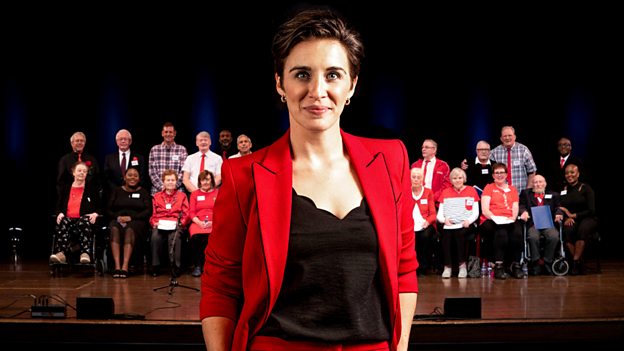 It’s great if we can get a wide range of people to enjoy the show, because it is enjoyable in parts, it’s not just a tragic tale of people living with dementia.Vicky McClure

Category: BBC One; Factual
In this new two-part series for BBC One, co-produced by the Open University, Bafta award-winning actor Vicky McClure takes us on a deeply personal journey to discover the true extent of music’s power in fighting dementia.

Joining forces with the University of Nottingham and University College London, and specialists from the fields of medicine, music therapy and performance she is forming a very special choir who will rehearse together to put on one unforgettable performance.

Vicky has close personal experience of dementia, through caring for her Nana Iris, who died in 2015. During that period, and through her role with the Alzheimer’s Society, Vicky has seen first-hand how music and singing had affected dementia patients and those who love and care for them.

Now, Vicky aims to spread the word on a much bigger scale. In this series she’ll meet the scientists exploring pioneering techniques and cutting edge scanning technology in order to reveal how music can stimulate a brain damaged by dementia. And, bringing her choir together, in just three months they’ll put on the biggest show of their lives with the opportunity to leave a lasting legacy in our understanding of how music therapy can help people with dementia.

You have a really personal connection to the story behind this series, can you tell us why you got involved?

It was an opportunity for me to do something, anything, to help people living with dementia. When the proposal came through from Curve, the production company, about what they were trying to achieve with this series, it felt like something that was really possible and doable and we’d actually find something. I thought that one thing is exposing people living with dementia, and another thing is where you do that as well as finding some results at the end of it. And that’s what I think we achieved.

Was there a stand out moment during filming that’s stayed with you, a particular choir member or family member whose story you related to?

Daniel and Jordan are not far off my age. I’m in my thirties, they’re in their thirties, we live in the same city and we go to the same city centre. It’s a familiar thing because we shot the series in Nottingham and we’ve got our Nottingham ways. It was hard with them as they could have been my mates from school, so I suppose that was quite a strange connection that we had.

The final performance is a standout moment because it was such an emotional day and it was the climax of everything that everybody had been working towards. The emotions were so high not only for the people living with dementia, but also for their families, for the audience members that came to support us, my family that were there, the crew. Everybody involved just all descended to this one day, and it was magical.

It’s a series that’s equal parts uplifting and heart-wrenchingly sad - what was the hardest/most challenging part of making it?

So, I think that the hardest part was just stopping. I didn’t want it to end because we had made such strong friendships and as much as we are all still in touch, I knew that it was going to be hard for them to have the attention that was really helping them with their lives and their family members, and then go back to normal life when we stopped filming.

There’s so much fascinating science in here that Prof Seb Crutch shares -  was there anything you were particularly interested in with regards to the connection between music/music therapy and dementia?

The thing I found most interesting was the fact that my brain, our brain, a healthy brain, fires up in the same way a dementia brain does when you hear music. There’s this feeling that when you get dementia that’s it, your brain just stops working, but that’s not true. Apart from one test that we did with Daniel, I did the same tests as everyone else. I was putting my brain under examination as much as they were to try and see what the difference was. In lots of cases, there wasn’t a lot of difference. Obviously you can see that there are certain parts of a healthy brain that function very differently, but from the musical side of things, it’s very similar.

You chose the Beatles song In My Life - it felt like a very personal choice, did you have any reservations about that or were you excited to see how the choir would take on that song with so much meaning for you?

It’s my favourite Beatles song for one, and for two, the lyrics are so relevant for somebody living with dementia.

For me it was the obvious choice. Some of contributors had heard it, which was great because it’s a familiar song, and some hadn’t heard it and very quickly came to love it. And now that song, for me and for them, has as whole new meaning because it’s our song.

You described the touching final performance as a legacy, a tribute to your Nana - and it was clearly very emotional. What else do you hope the BBC One audience take away from watching this series?

I want people to go out and do stuff, I want us to keep learning, I want us to be a bit more patient in terms of everyday life. If you’re standing at a checkout and somebody’s struggling to remember their pin number, just be mindful that that person might have dementia. There’s so much we can do to help each other, and I really hope that this documentary sparks something in people to go 'do you know what, I love music, I can play a guitar' and  they might think: “I can play a musical instrument, I might go and spend an hour in a care home every week to volunteer, just to give people an hour of joy.” And that’s what I hope will happen from the documentary.

Is there anything more you’d like to share - your reflections or thoughts on being a part of this project?

I want young people to watch the documentary as much as I want an older generation to watch it. It’s quite obvious that the older generation might have more experience of it, because dementia may have affected more people of that age. But I think that it’s vital that kids watch it, because their grandparents may be those that suffer with it, their parents may be those who suffer with it. It’s great if we can get a wide range of people to enjoy the show, because it is enjoyable in parts, it’s not just a tragic tale of people living with dementia.

It’s like Chris and all of these wonderful characters that are making jokes, we are laughing with them because they are trying to find humour in the darker times.

I just really want everybody to give it a chance.I think this is very real and I think people would be able to relate to it.