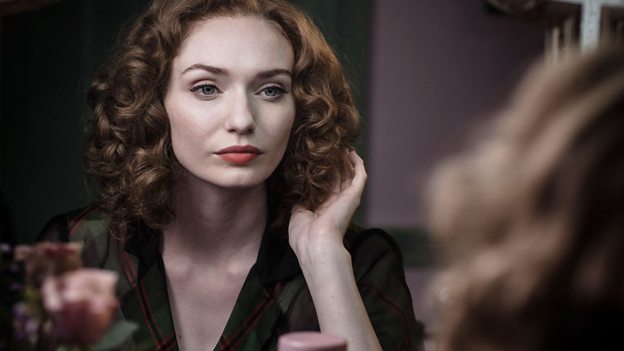 Sarah (Phelps) has modernised the whole story and made it accessible for a modern younger audience that I think is necessary for a brand like Agatha Christie.Eleanor Tomlinson

When you first read the script what drew you to playing Mary Durrant?

The character of Mary is so different to anything I’ve played before. I’m probably most known for my character Demelza in Poldark and Mary is probably the polar opposite of her. She’s a relatively weak woman and fractured, worried about people’s opinion of her and she’s desperate to be loved. Having been adopted she seeks love and is very competitive when it comes to being her mother’s favourite. I was really drawn to this very sad girl and I wanted to explore that and push myself to the limit with different twitches and addictions that she has.

What are her addictions?

She is an incredibly nervous person and Mary turns to smoking and drinking which at the time was popular but she sees that as a moment of relaxation for her. She spends her life looking after Philip and trying to make him as comfortable as possible. There is also a huge amount of guilt there too and the time she has to herself is time spent really exploring her damaged side and we see that come out in her addiction to smoking and these uneasy twitches that she has.

Despite dedicating her life to looking after Philip following his accident their relationship seems tragic?

Philip and Mary’s relationship is incredibly sad. He has had this awful accident, which has left him somewhat at her mercy. He relies on her not only for her dowry but she does everything for him which puts a huge strain on their relationship and he’s not particularly nice to her. She was a relatively weak person to begin with so the last thing she needed was someone who was going to abuse that. She hasn’t come from a past that has been loving and beautiful and she’s come from an upsetting relationship with her mother and father and a desperate need to be loved. The last thing she needed was a man who had his own insecurities.

How did you and Matthew go about creating that intensely hateful relationship between him and Mary?

Matthew is a fabulous actor and although we’ve worked together before I always learn a lot from watching him at work. Mary and Philip are really struggling and she has to deal with a lot when helping Philip. The reality is he is solely and severely reliant on her for everything and all the embarrassment that comes with a man of that time relying on his wife for everything from handing him a urine bottle to literally doing everything personal for him. It was really interesting working with Matthew to create that dynamic.

Mary just desperately wants to be loved by Rachel. She wants to be her and she models herself on her mother; caking make up on her relatively young face which is so sad when you think about it. She has this need to be noticed which is so exciting for me to play because she is so different to my previous roles. She clings on to Rachel all the time and is actually driving her mother mad by doing that.

What is her relationship like with Leo, her father?

Her relationship with Leo again is one of wanting to be loved and to be the best child. She has that possessive quality about her and she’s so competitive having grown up with new children being introduced over time that she’s never number one. There’s always someone new, shiny and exciting and she’s incredibly broken by that.

What is the sibling rivalry like between them all?

It feels like Mary is slightly separate from them all. Mary is slightly older than the others (not too much) but it does feel like she’s set herself apart from the others. She spends most of her time caring for Philip so her relationship with her sibling’s drifts apart as they grow up. They all strive to be mother’s favourite and all she really wants is for her mother to tell her she is proud of her and she’s done alright.

How does Mary react to her future stepmother Gwenda?

Mary finds Gwenda incredibly irritating and she’s everything that Rachel wasn’t. Alice Eve is doing such a tremendous job of playing Gwenda. She is so sexy and shoves that right in Mary’s face and Mary is so prim she finds her grotesque. I think Mary is jealous of Gwenda for the attention and respect she gets from her father.

What did you think when you first read the script?

I feel it’s a very different Agatha Christie with all these big characters. It’s very much an ensemble piece with a real mystery at its heart. Throughout the three episodes we establish fractious relationships between the mother, father and siblings and are constantly wondering who could have done it. Sarah has modernised the whole story and made it accessible for a modern younger audience that I think is necessary for a brand like Agatha Christie.

What did Sandra Goldbacher bring to the show?

Working with Sandra has been fantastic. She’s so across every character and every scene; in fact I could ask her any question about any scene and she has an answer straight away, which is great as an actress. I could be thinking about a scene that I might not be shooting for a few weeks but Sandra will be ten steps ahead of you and always have an answer whilst being totally open to you bringing your own ideas to the table. She has given me complete free rein to create this fractured, slightly bonkers girl and that has been a really rewarding experience.

Have you enjoyed dressing in this period?

Trisha Biggar was very open to suggestions from all of us as to the design of our costumes and most of the costumes she sourced or made are either originals or based on original designs. Every piece is extraordinary and has its own story.

What did Claire Harris have in mind when she was designing Mary’s make-up and hair?

Claire and I discussed how flawless we thought Mary should be but flawless in the way that young girls put too much make-up on trying to be older. That’s what we’ve created in Mary. In the show Mary spends a lot of time getting ready because she wants to be loved and appreciated and have her mother’s approval and be noticed by Philip, her mother and her father. Right at the end we see her loosen up a bit and she’s a less nervous version of herself with less make-up caked on. Suddenly a bit freer.

How did it help filming at Ardgowan House?

Ardgowan House is the most gorgeous house yet there’s so much space in it that it almost seems lonely. It was the most perfect fit for the backdrop to the story. There is an austere feeling to the house and it almost seems too big and grand; a hint that Rachel and Leo aren’t paying attention to what’s really important. For them it’s more about the style of the house than their children’s welfare.