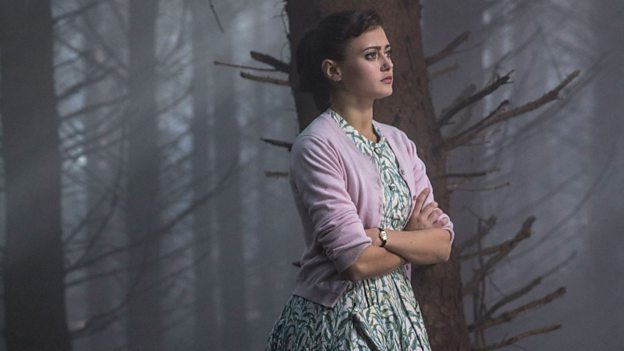 I had to learn Chopin’s Nocturne No 4 or 5, I used to play piano when I was a kid but hadn’t played for ages... It took me three months to learn five bars.Ella Purnell

Who is Hester and how does she fit into the story?

Hester is the youngest of the adopted children, she was adopted third. She is 18 in present day though we first meet her in flashback in 1953 when she was 15 or thereabouts. She is the baby of the family and she’s treated that way even though that’s not necessarily how she feels. Hester has the perfect Miss 50s look with the wide skirts and an equally wide-eyed innocence but she has two personas. She has the family persona where she plays the princess and she has her real character, which is how she behaves with her siblings where she acts much older.

She is closest to Jack and Tina, and she is closest in age to Jack, he has this mischievous spirit and independence that she craves. She is also very close to Tina. Tina is very protective and sweet and offers the advice and provides the mothering that Rachel can’t quite offer Hester. Later in the story she becomes closer to Mickey, he is possibly her favourite of all the brothers and sisters. Mary is much older than any of them and is married so she’s slightly set apart from the others. She doesn’t quite let go the way the other siblings do.

Hester and Rachel’s relationship is difficult. It isn’t your normal mother/daughter relationship. The tragedy with Rachel is that she always desperately wanted her own children and she can’t have them so she adopts thinking it will make her happy but it doesn’t. She never offers them any affection, any kind words or encouragement, nothing. I think a lot of their relationship is based on what Hester looks like and Rachel is always selecting her clothes and making sure Hester always looks perfect which is why Hester develops an obsession with her appearance, maintaining this expectation even after Rachel is murdered. Rachel is almost like a pushy stage mum, putting pressure on Hester to always get her piano recitals perfect through hours and hours of practice. I do however think she loves her mother, they all do in some way, but it’s a weird kind of love when you love someone who doesn’t give you anything back.

How does she interact with her adopted father and what is the essence of their relationship?

Leo loves all his children and they adore him. Hester especially will always love her father and always want his approval but in the end there will be that distance between them. It breaks her heart knowing that he can’t look at her the way he used to.

What is the dynamic between Hester and Philip, her brother in law?

Hester and Philip have a weird relationship and it took me a while to figure it out. What I was struggling with was that Hester has an ‘on-face’ and an ‘off-face’ and she puts the “on-face” with her mother and father and with Philip as well to a degree. But Philip is so perceptive, he knows she puts on an act. It’s something they don’t speak about but it’s obvious he has the measure of her. Does she know about his attraction to her? Is he really attracted to her? I don’t know. He probably does but equally it may be to spite Mary. There are so many twisted feelings amongst them all that right and wrong become confused in some regards.

Were you aware of Christie’s work beforehand or familiar with this story?

I knew who Agatha Christie was of course but I haven’t read many of her books previously and I hadn’t heard of Ordeal By Innocence. When I found out I had got the part I did read the book, it is still modern and relevant to today in its core themes but the way Sarah (Phelps) has structured the flashbacks and story hooks in the script kept me gripped from the beginning. Each character is incredibly complex.

You had to learn the piano for the part?

I had to learn Chopin’s Nocturne No 4 or 5, I used to play piano when I was a kid but hadn’t played for ages, so sitting at a piano wasn’t completely alien to me but you do forget just how hard it is to play! It took me three months to learn five bars. It was really tough but really nice to do and I’ve slowly got back into my piano. And for Hester it is another expression of her and who she is. She was taught to play with a book on her head and play these classical pieces. I imagine in her spare time she dreams of going to Greenwich and playing jazz, wearing trousers and drinking wine and just being herself which she never gets to explore.

You are well known within the fashion world, how have you enjoyed exploring this era through the costumes?

The 1950s is my favourite era. I’ve done the 40s before but I was so pleased when I learnt it was set in the 50s. It is like playing my favourite kind of dress-up. I never wear pretty, dainty, girly dresses and it helps so much with the physicality of the character which I discussed at length with Sandra before we started; the fact that she is almost balletic and graceful in her demeanour. Audrey Hepburn was a huge inspiration for me and the way that you move in the dresses and heels helps enormously.