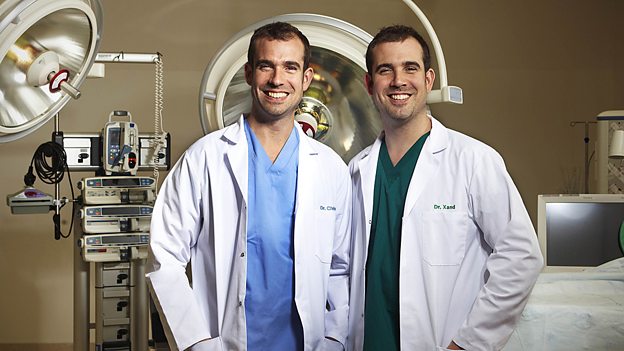 In Operation Ouch, the two doctors experiment and explore their way through the fascinating world of medicine and biology, showing and explaining the awesome things our bodies can do. The series will also de-mystify what happens in hospitals for younger viewers.

In their special laboratory, Dr Chris and Dr Xand experiment on each other and push themselves to their physical limits to show viewers how their bodies work. The experiments include: Chris demonstrating how our vocal chords work using an endoscopic camera, scrambling their brain signals to show how they control body movements and charting what happens to food in the digestive tract with a very special camera pill.

The two doctors will investigate bizarre medical treatments and advanced medical technology. They look at how maggots are used in medicine today; explore how our bodies cope with extreme cold in a cryogenic chamber and observe a robotic surgeon operating on a real life patient.

The series is also packed with non-stop action as Dr Chris and Dr Xand meet staff in the busy paediatric emergency departments at Alder Hey Children’s Hospital and Royal Manchester Children’s Hospital. Each episode will feature children admitted to the A&E wards, following their journey from diagnosis through to recovery and treatment. The series also features animated inserts that explain just how cool our bodies really are.

The doctors will be joining the emergency services providing medical assistance on the road and in patient’s homes as we follow the work of the West Midlands Ambulance Service and Midlands Air Ambulance rapid response teams.

And to get viewers excited about how their bodies work, Chris and Xand demonstrate a series of cool body tricks to try at home.

Dr Xand van Tulleken says: “In Operation Ouch, we have tried to make the show we'd have enjoyed when we were 10 years old! We went into filming thinking we could easily explain how the body works but have ended up discovering much more about it ourselves. For me, one of the best bits during filming was the sneezing experiment - I actually had no idea how a sneeze worked until Chris explained it to me, and since then I've asked all my medical friends and most of them don't know either!”

Operation Ouch (13x30min) is produced by Maverick Television for CBBC. The series producer is Ian France and the executive producers are Simone Haywood for Maverick and Kez Margrie for CBBC.