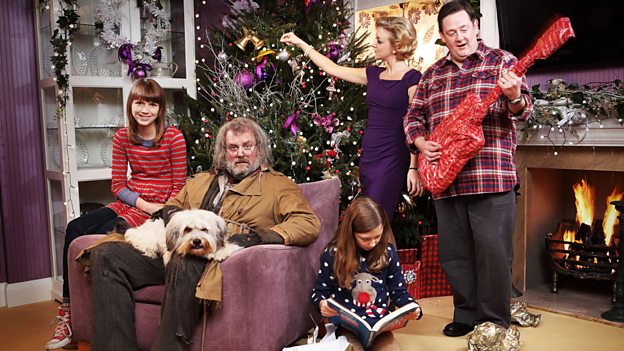 Adapted by Walliams himself with Simon Nye, this 60-minute family comedy tells the story of lonely 12-year-old Chloe (Nell Tiger Free), who invites local tramp Mr Stink (Hugh Bonneville) and his dog Duchess (Pudsey) to hide out in her family’s garden shed.

Chloe also has to cope with an over-bearing mum (Sheridan Smith) who is more interested in her own political ambitions and her infatuation with the Prime Minister (David Walliams), than her daughter. ‘Perfect’ younger sister Annabelle (Isabella Blake-Thomas) and nasty girls at school also make Chloe’s life miserable. Chloe’s only allies are her put-upon dad (Johnny Vegas) who is harbouring a secret of his own, and newsagent Raj (Harish Patel).

But Chloe soon discovers she is not the only one harbouring a secret and there is certainly more to Mr Stink than meets the eye… or nose.

In addition to being broadcast in standard definition, Mr Stink will also be shown in 3D on the BBC HD channel - the first time the BBC has filmed a narrative programme in 3D.

Family comedy Mr Stink is being produced by BBC In-house Comedy Productions in association with David Walliams and his production company DEW Productions. It will be directed by Declan Lowney (Little Britain, Alan Partridge, Father Ted). It was adapted for television by David Walliams with Simon Nye (Men Behaving Badly, Just William, Dr Who). The Executive Producer is Mark Freeland, Head of BBC In-house Comedy and the Producer is Jo Sargent (Miranda, Absolutely Fabulous). It was commissioned for BBC One by Danny Cohen, Controller BBC One and Cheryl Taylor, out-going Controller, Comedy Commissioning.