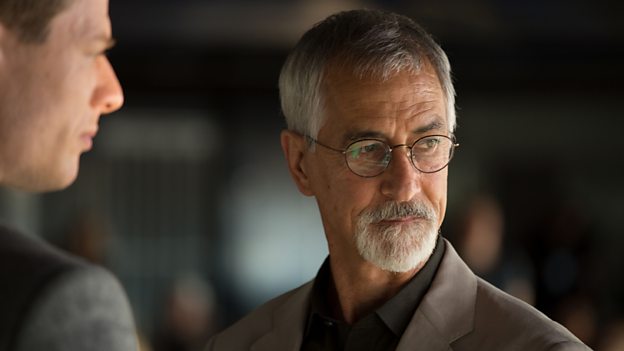 I thought a lot about Semiyon’s journey as a player in the corporate criminal world and what that costs him as a person. Everyone pays a price in this story and that gives it heart.David Strathairn

Tell us about your role?

He’s a complicated fellow. He’s a Russian born, Jewish Israeli politician but also a major player in the criminal network that McMafia is exposing. He’s a financier who is very adept at moving money around and keeping himself out of the limelight, enough to be a member of the labour party and the Israeli government. He has a very interesting relationship with Alex and wants to get back at Vadim who kicked him, and Alex’s family, out of Russia.

He’s mysterious in a way that hopefully you don’t know where his allegiance is lying. Alex is doing things because of his family, whereas Semiyon is purely is out for his own ends. He’s not all bad but like most of the characters in this story, there are no heroes and no villains, just humans.

I thought a lot about Semiyon’s journey as a player in the corporate criminal world and what that costs him as a person. Everyone pays a price in this story and that gives it heart.

What attracted you to being involved in McMafia?

The charm and uniqueness of McMafia is that it deals with these mythic proportions when it comes to what the mob means in our subconscious. If you mention the mob, people think of The Sopranos, The Godfather and there’s a sort of romantic bubble around it. McMafia is a very piercing objective depiction of what goes on in that world which is why I think it’s special. This show and Misha’s book put it right on the table and says this is the world we live in and it’s made up of these types of individuals. It’s been done with a lot of frankness, discretion and sincerity, in a clever yet delicate way.

It could be considered a crime thriller but at the same time it’s a human interest story about people, real, complicated people. They are good and bad at the same time. Also what I think is amazing about this production is that almost every character is played by someone from the country they are meant to come from, the casting is amazing. If the character is from Israel, Russia, Slovakia, Mumbai, the actor is too. Apart from me, I am the only person who isn’t what he is supposed to be in the script!

Did you find that a challenge?

Yes but thankfully James Watkins, the director, said it was OK and that he should be a bit of a mystery. We know who he is on paper and how he’s defined by what he does but we aren’t sure about him really as a person. He very much slithers through the landscape.

Is this a world you knew much about?

I didn’t know much about it, Misha’s book became the source and it was the oracle for me. Nor did I know much about the Russian/Jewish/Israeli culture but the production provided all of us with so much tangible palpable information. The sets and locations alone did so much to inform the atmosphere.