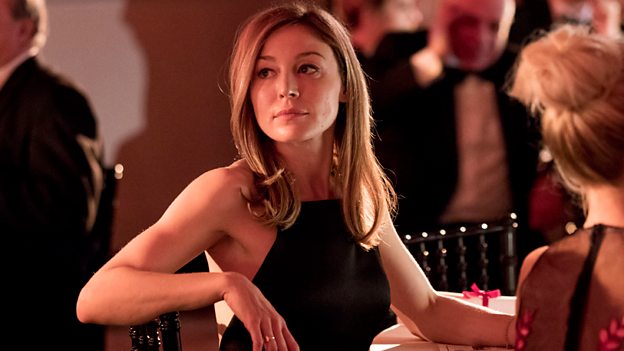 I felt I knew about globalisation and corporate takeover of cities and fair-trade but I knew so little compared to what this story has revealed. I think that will be interesting to the audience too. Some of the stories you think can’t be real but they are!Juliet Rylance

Tell us about your role?

I play Rebecca Harper who is Alex Godman’s girlfriend and is an ethical banker; she works for Sydney Bloom who has set up a foundation to promote ethical banking around the world. Alex and Rebecca work in the same world.

I feel every character in this story is unique, particularly the women in this piece as they have a wonderful balance of being extremely vulnerable and really strong and you don’t see that in women in TV shows often. Rebecca is strong and very bright and savvy but incredibly trusting of her partner. There’s a couple of moments in this story where you think she must know there’s more going on but there’s a confidence in actually saying “I trust you, you are my partner and what you are saying is true.” And I love that about her.

How I prepare for every role really. I spent a couple of weeks with the script before I went on set and broke down everything she said about herself, about other people and what other people said about her, to get an idea of who she was as a person. I worked out the beats and the characters arc throughout the piece. A character for me comes off the page and I fit the aspects of me that are similar into that character and get rid of the bits of me that aren’t.

What drew you to McMafia?

I loved the scripts, all eight episodes are so beautifully paced and the story is thrilling. It’s a world that I didn’t know much about, a whole underbelly of London. I spoke to James Watkins (director) about how he was intending to shoot this mammoth project and I loved the idea of the realism and grit that he was trying to create. It sold me on the project. I saw it really clearly in my imagination and it’s really stayed close to how I hoped and imagined it would be.

Is it a world you knew before working on the show?

I felt I knew about globalisation and corporate takeover of cities and fair-trade but I knew so little compared to what this story has revealed. I think that will be interesting to the audience too. Some of the stories you think can’t be real but they are!

Can you tell us about working with the other cast?

This project was incredible because it’s been a completely international cast - including Russian, Israeli and Croatian actors. It was amazing working with so many different actors from different countries as they had different styles, practices and approaches to the work. For example, watching Alexsey Serebryakov and James Norton filming a scene and seeing their two processes meet, merge and create a kind of alchemy was really fascinating. We were really privileged and lucky and working with these other actors brought something new to our own practices.

What is universally relatable about this story?

While the world is huge, glamorous, corrupt and daunting, at its heart it’s about a family.