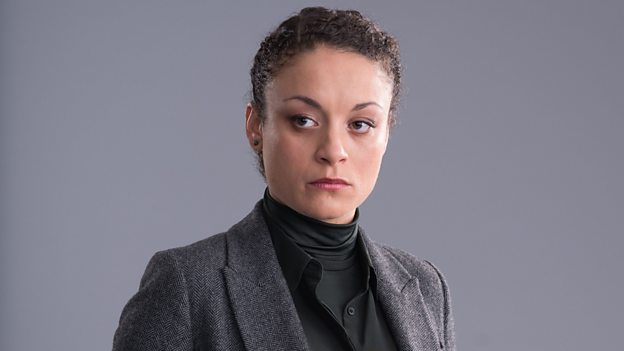 Sometimes in the midst of the action scenes you can’t believe what’s happening as it’s so realistic - so there’s no acting required!Rochenda Sandall

Were you a fan of Line of Duty before you got the part?

Absolutely, I watched it every single year. When I auditioned for the part I watched it all again over two or three days. I was a massive, massive fan. It was the first time auditioning for Line of Duty and I got lucky, hole in one!

Have you found it tricky to stay quiet on the plotlines? Did any of your friends and family try to get the truth from you?

Of course they have tried to bribe it out of me! They love an exclusive. But the truth is, it’s like being told what a present is whilst you’re unwrapping it. It seems like a good idea, but it’s not - it’s underwhelming! I tell them to watch it like everyone else, I’m going to be watching it too as I wasn’t in some parts so they will be a surprise to me too and I want it to be that way. Even my agents haven’t read the scripts as they want to enjoy it as it comes out!

What can you tell us about your character Lisa?

Did you have any action scenes and were they fun to film?

Absolutely, sometimes in the midst of them you can’t believe what’s happening as it’s so realistic - so there’s no acting required! They are set up in such a good way.

From being a fan, was there anything that surprised you about the show/how it’s made?

No real shocks but on a personal note, walking in and working with these amazing actors is mind blowing. It’s shocking how relaxed everyone is, you expect utter chaos but it runs like a well-oiled machine.

Were there any memorable moments on set?

Stephen had a cold one time on a freezing on a night shoot. He asked one of the dressers to put Olbas oil in his balaclava, but I think they put a drop too many in as his eyes just wouldn’t stop running. And he had to wear it all night, so he was just crying the whole time!

How was filming in Belfast?

I totally love that city; it’s in my top five I would say. It’s a nice place to mooch about in, good restaurants, lots of bars and pubs, markets and things to see. The people are really nice.