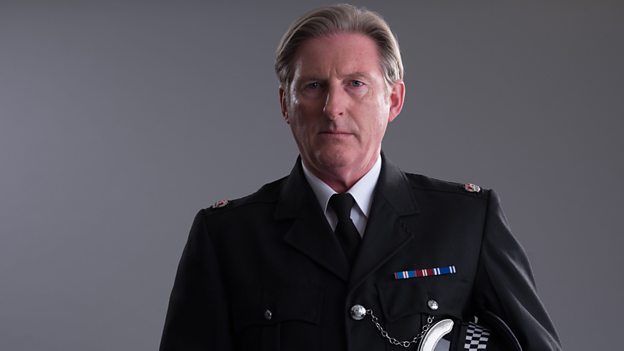 I think Hastings is a very interesting character; he is struggling to be good.Adrian Dunbar

What excites you about a project like Line of Duty and what makes it stand out from other dramas on television?

As were going into the first series, you just get excited about how the stories’ developing. We’ve got a huge audience out there waiting to hear what’s going to happen to the characters and especially the three central characters; Vicky, myself and Martin who we’ve got to know over the years a bit more and I think the audience has become interested in them.

One of the strengths of the show is the fact that it has a very interesting format, in that you do have these three central characters in AC12, but we do bring in a lead character. A lot of the time it’s their show and we fit in around them. So rather than having a guest lead, it’s a proper lead, so that dynamic is different.

Some shows work on the basis of being procedural but ours is incrementally slow in its delivery of information because it’s genuinely procedural. It’s real; lots of people, police work, working on things very diligently, that brings the results. So I think those things are interesting. And also with the idea of the police investigating the police so we’re always up against people who are really clever.

How would you describe your character?

I think Hastings is a very interesting character; he is struggling to be good. Police work is a vocation to him, he believes in it, believes in the rule of law and he lives his life by that. But like everybody he struggles, so therefore those grey areas are the interesting areas to play with the character. I think he’s a character people respond to because they like to think there is someone out there who believes in the letter of the law and believes it’s worth fighting for. He’s got a very difficult personal life, sadly he doesn’t have any kids and I think that’s something that’s missing in his life.

Where do you think he is psychologically at the beginning of the series?

At the end of the last series, we left a question mark hanging over Hastings as to how much he actually knows about what’s going on regarding the organised crime groups and the institutional links. That’s something that’s going to be teased out throughout the series. I think that’s one of the main storylines and it’s something that people will be interested in because we have to clear up one way or another, if Hastings is tactically or completely involved.

One of the central themes of Line of Duty are the interrogation scenes. How do you approach them?

The interview scenes are difficult. Approaching them you just have to start learning the lines pretty early. They do take a long time and concentration. We shoot them mostly with three cameras over a couple of days so you’re looking not to have them spread out as much as you can so you can get on done and move on to the next one. You have to really work on Line of Duty, because the language is very difficult and what you’re describing is usually very technical and detailed, so you can’t busk it. So it’s just a question of getting your head down.