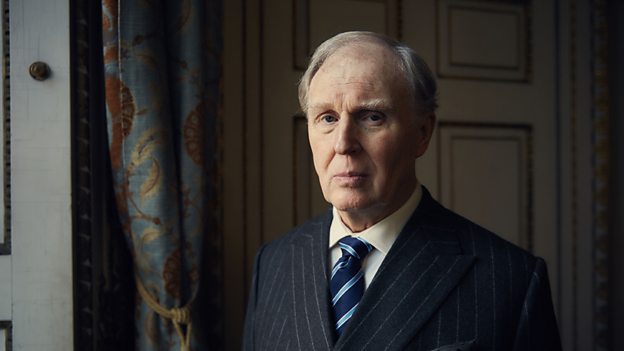 We didn’t want to do imitations but just occasionally there’s a suggestion of the actual man. I’ve been doing it for so long now that I probably sometimes do it without even being aware; it’s just my other self now.Tim Pigott-Smith

Did you have any concerns about bringing the play to TV?

I was concerned about whether the soliloquies would be intact as they were very important in the play and Charles had several. I was also concerned about whether the humour would come across on TV. But Mike’s done a really good job of moving it from being a Shakespearean style history play to a modern film but yet still keeping the incredible verse and language. I think we’ve managed to capture the essence of what we did on stage and bring it to the camera.

It’s a remarkable play and it’s wonderful that it’s going to be seen on television, the most democratic of all our media. It’s likely more people will see it in one showing than saw it in its entire run at the theatre, which is an extraordinary thought.

What are the key differences between the two?

The main challenge is using big language on the small screen. Also we’ve had the opportunity to shoot in amazing locations but the stage being nowhere and anywhere can be wherever you like. Rupert Goold, who has directed both, has a very strong visual sense and although the play looked incredible, it’s fascinating doing it in a real environment, it’s been very pleasurable.

It’s a wonderful part and there are some phenomenal scenes to play. I feel it could have been written for me, but it wasn’t because I didn’t know Mike before! It’s just thrilling and I’m very hopeful we’ll have produced a good record of the play as well as its own distinct television version.

I’ve played quite a lot of real people and it carries a special responsibility.

In this we’ve been cast as if we would make a very good shadow, if you took a picture of the five main Royals and their shadows and then our shadows there wouldn’t be a huge amount of difference, so we’ve been cast sensibly.

Someone asked me if I’d done a lot of research but I haven’t had to as Charles and I have grown up in parallel and I’ve watched him go through various phases of his life.

When I was offered the part I was working with a friend who did voices for Spitting Image. I asked how he would do Charles and he said that Charles fiddles with his signet ring and his cuffs and that he pulls his mouth down to the side when he’s talking and doesn’t really open his mouth. Watching a video of him I also discovered that he does this thing with his hands outside his pockets, they hover outside but they never go in, which is wonderfully indecisive and suits the character as written in the play. We didn’t want to do imitations but just occasionally there’s a suggestion of the actual man. I’ve been doing it for so long now that I probably sometimes do it without even being aware; it’s just my other self now.

Endless people say how like Charles I look but actually I don’t. I think that as we aren’t doing impersonations the audience are free to take the image of the actual Royals and plant them on to us. I’ve never been in a play where you say in the first scene “George didn’t cry” and everyone immediately knows who you’re talking about. It gives the show great power and immediacy.

Why do you think the play was so popular?

I think it is genius and I cannot begin to imagine how Mike cooked it up! When Rupert came to me with the play he said I might not like the blank verse but to me that made absolute sense and it’s a modern verse, almost like a rap. It’s absolutely brilliant how he’s made it relevant because it provokes a huge amount of debate about the state of the monarchy.

The whole world is interested in the British Monarchy and in the UK it’s particularly relevant at the moment. It’s enjoyable, it’s a very clever story and it’s funny but not at the Royals’ expense. It’s proper drama. We’re extremely lucky to live in a country where we can make this show and that’s a great responsibility. The Royals live their lives in public but they still have to be dealt with with integrity and I think and hope we’ve been very careful to do that.