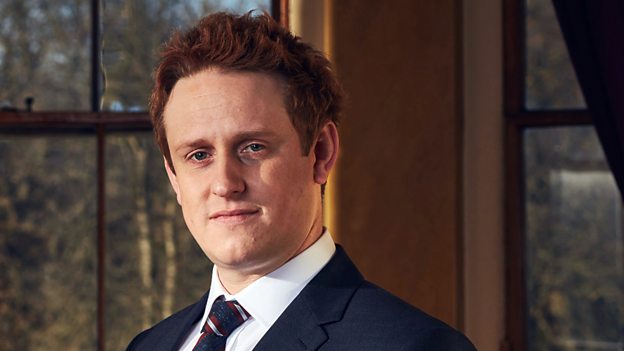 All these characters are in the public glare, I was buying a newspaper this morning and Harry was on the front pages... but our production doesn’t go in for impressions of these people.Richard Goulding

What are the key differences between the stage and TV versions?

Mike has done a really good job with adapting it really neatly for screen. There is the right balance of what we had in the theatre alongside his great experience of writing for television.

We’ve done lots on location, whereas on stage the audience had to do a lot of imagining. We've kept the verse language which is theatrical and it’s unusual for something like that to be on television. It’s been wonderful to bring something that we’ve known for so long down to a detailed level. We’ve had this in our minds for nearly three years.

Not really. All these characters are in the public glare, I was buying a newspaper this morning and Harry was on the front pages, so there is a consciousness that they are real and there every day in our lives but our production doesn’t go in for impressions of these people. Doing an impression of Harry would undermine the integrity of this production. So it was more a question of honouring Mike’s work. Having said that, there is an aspect of wanting to capture an essence of Harry as much for the audience’s sake as for your own. As soon as Camilla says “Ah Harry, it’s so good to see you” the audience get it.

Best description of your character?

Without giving too much away, he starts off in a place where he doesn’t know who he is or what his role is. He’s struggling and in turmoil. He doesn’t want to engage with what he needs to do as a Prince and meets a girl that isn’t the sort of girl that he ought to be with, at least in the eyes of the public and his family. It takes him on a journey of discovery of what life could be like if he didn’t have his duties. There are two plots in the story, one is the constitutional crisis and the sub plot is Harry and Jess and eventually the two plots converge.

The language, the skill and the subject matter. It’s a really good story. It’s funny, it’s tragic and it’s got a love story. Its issues are ones that matter to everybody so it’s a story of national importance. The performances are wonderful, having worked on it for so long, to be watching it come to life is really exciting. The language is rich, dense and clever but not alienating.

Making this for television, a culmination of a long beautiful project after three years of working together is such a privilege. I feel really lucky.