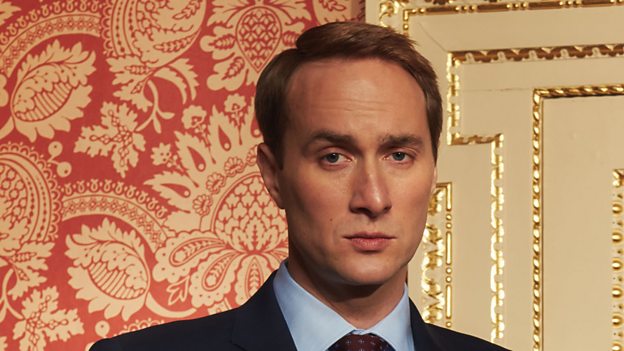 It’s a five act tragedy with visions of people you recognise and a great addition to the debate about the Monarchy and its place in society, the institution and the real life family that exist inside it.Oliver Chris

What were your initial thoughts on the TV script?

When I was sent the script it gave me goose bumps. I don’t know if that’s because I’d never read a script like it before or because it was so amazing to see this play that we worked on for so long, so different yet so identical. Seeing it elevated into a new art form was an extraordinary thing.

What are the key differences between the stage and TV versions?

They are very different. The set for the play was very beautiful but sparse and a huge amount of audience imagination was needed. In the TV version we have brought it into the real world and filmed in some of the greatest houses in Britain.

Most of the research was done when we first started the play. I watched a lot of YouTube videos. One of the perks of playing someone who has grown up in the glare of the public eye is the wealth of research, photos, news reports and videos, it’s very accessible. Because I’ve played this role for so long, I’ve been on my own journey of development with it and this feels like the next natural stage of it. To bring three years’ worth of history is a huge benefit.

Describe your version of William…

Our William is based on a version of Prince William. He is a very dutiful member of the Royal family and next in line to the throne with Charles. He’s been indoctrinated to his role and his duty to his father and his family. There is a way of behaving and being that he feels duty bound to embody. As the country begins to spiral slowly into chaos, and ultimately disaster, he has to face reality that he has to do something about it. He is going to have to take a big step with the help of his wife.

What attracted you to the project in the first place?

When I auditioned for it, I'd never seen anything like it before. It’s an extraordinary concept. It seemed so brilliant and so simple that I wondered why no one thought of it before. Fortunately, Mike Bartlett, the genius, thought of it and it’s brilliant. It’s a five act tragedy with visions of people you recognise and a great addition to the debate about the Monarchy and its place in society, the institution and the real life family that exist inside it.

What have been your highlights from filming?

It’s a blessed extension of a wonderful job. I fought to get this job when this was a new piece of experimental theatre in a 200 seat venue in North West London. I felt it had real integrity and heart and it’s now an international phenomenon and we are now bringing it to homes all around the world, what a great honour. As an actor, to go on a journey with a character for three years, to have the benefit of doing it over and over again and learning from each performance and then to bring it to this new medium, doesn’t really happen. Tim and I filmed a very big scene a couple of days ago, about seven pages long, and we played it in one go. It was one of the most wonderful days of creative work I’ve ever had.