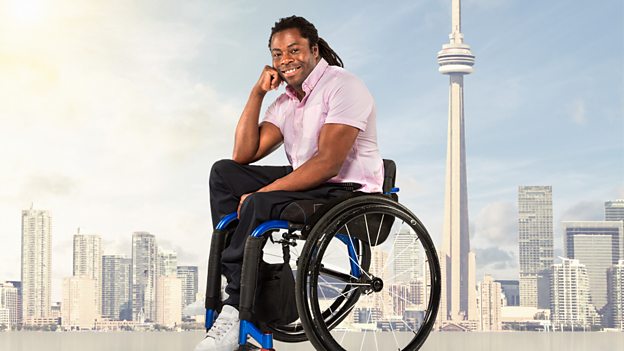 The Invictus Games is so absorbing that if you could bottle the essence of the Games and you got to open that bottle and sniff it every day, you’d live for ever.Ade Adepitan

What does the Invictus Games mean to you?

What I like about the Invictus Games is it’s a chance for injured war veterans to put their lives back together again. I’ve always been someone who has said how important the power of sport is and you see what it has done for these guys who have gone through hell, the horrific injuries they had and the experience they’ve gone through. Probably for a lot of them they thought their lives were over. A lot of these men and women probably had this preconception of before when they were fit, able bodied and strong, that if you ended up in a wheelchair or ended up blind or with any sort of impairment, that was it, your life was going backwards. But this completely turns it around and to see their eyes and how much it does for them when they’re out there performing and representing their country, I think it’s amazing. It’s about putting people’s lives together using the power of sport.

Which Invictus story has inspired you the most?

I think [discus thrower] Derek Derenalagi. He was in an armoured vehicle that drove over an IED and blew him up and threw him out of the vehicle. He was pronounced dead, I think they put him in a body bag and it was only when the doctor found a faint heart beat that they realised that he was alive. He woke up in a hospital bed in the UK and that’s just the most remarkable story. If JJ Abrams or Steven Spielberg did a film with that story line you’d be like yeah whatever. But this really happened to him. To go from almost being pronounced dead to competing in the Invictus Games, that’s just remarkable, it is mind blowing. And he’s such a bubbly personality. I just think he’s incredible.

What event in Toronto are you most looking forward to covering?

It’s hard for me not to be biased and say basketball, but I just think in 2016 the basketball was really good and I think every Invictus Games the basketball tournament gets better and better. The standard is not Paralympic standard, but all of these people are playing at their level. When you’ve got loads of people at a similar level on a level playing field competing against each other, it’s just exciting. It’s physical and these guys are from a physical background so they’re not going to back down. So I like watching them and seeing how much effort they give and looking at the potential. And what Invictus did in the US was really good with all the razzmatazz of basketball. Wheelchair basketball and basketball is not just about the sport, it’s about entertainment. At the opening for it I remember filming the guys from the GB team as their names were announced and the fireworks were going off. Some of these guys would never have dreamt of getting that introduction. There’s nothing like it when you get called out to represent your country, the crowd is screaming and your name is shouted out on the tannoy. That’s when you feel a thousand times bigger.

I think it was the first Invictus Games in London and just watching the GB team doing so well, when Charlie Walker picked up the medal for GB coming top of the medals table. I’m a people person and seeing the response of the people and the British public in the Copper Box, seeing their faces, seeing the kids and how excited they were to watch disability sport and how proud all of these athletes were, for me it was just beautiful. The Invictus Games is so absorbing that if you could bottle the essence of the Games and you got to open that bottle and sniff it every day, you’d live for ever.

Invictus helps to turn people’s lives around - can you tell us of an inspiring turning point in your life?

For me it was making it into the Paralympic basketball squad for Great Britain. My journey began as an 11-year-old kid who watched the Los Angeles Olympics on a black and white TV at home in East London, dreaming of competing at that level, and it took me the best part of 15 years to get there. I got cut from the GB squad I think it was six times and I almost gave up. So to go for 15 years and get 15 years of rejection, I left home and lived on my own and everyone thought I was bonkers when I was trying to go for this, and to get that letter through the post to say Ade Adepitan you’ve been selected for the squad, to me that just changed everything. It was the platform for everything I’ve done in my life so far.