Home / Media packs / In The Club 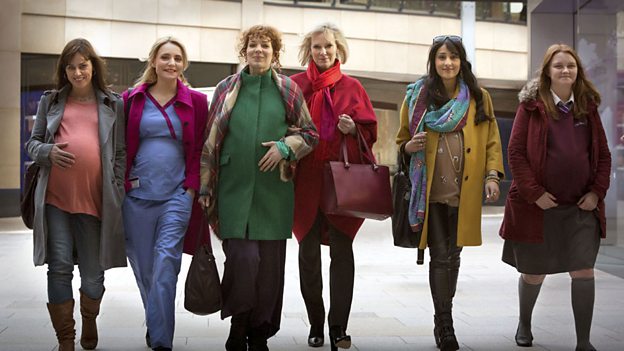 In The Club - introduction by Kay Mellor

It didn’t go away though, it just kept growing as an idea and the premise kept shifting. Post The Syndicate 2 when Polly and Ben asked what else I wanted to write, without hesitation I said I want to write about new life - it’s called In The Club and it’s about a group of prospective parents who are in their last trimester of pregnancy and meet at a NHS Parent Craft group.

They’re ordinary people whose lives are about to change forever. It’s also about the relationships that are formed; people clinging to each other at a time when they are about to step off into the abyss.

I’ve always wanted to write about birth as it’s a life-changing situation, no matter who you are; whether you’re a schoolgirl living in a high-rise council flat or a 46-year-old rich business woman - your life will never be the same again. Pregnancy and birth are not discerning, the intellectual and well-read woman can often have the worst birth and the younger know-sod-alls just get on with it and out pops a 10-pound baby. The fact is there are very few ‘lessons’ on how to give birth and be a parent. We study for three or four years for a degree and yet we’re supposed to know instinctively how to give birth and be a good parent – arguably one of the most important roles we’ll ever have in life. The truth is young or old, we’re all terrified of it – male and female alike.

Private parts of our body usually associated with pleasure and intimacy are suddenly exposed for all to prod, measure and examine. Your body is taken over by an alien, there are bodily fluids involved and the whole thing seems like a total physical impossibility anyway. Then, having done the impossible, you’re landed with the responsibility of looking after another human being; one that can barely function, bar feeding, pooing and crying. Of course there’s the miracle of instant bonding that we rely on so much, and we cross our fingers that with that bonding comes an instant download on baby care and child psychology that’ll see you through till they’re 18 or 40!

When I had my first child I was 16. I was five months pregnant before I told anybody other than my then boyfriend. I don’t know what I thought was going to happen. I think, I thought it might just go away. When I did eventually fess up my mum took me to a clinic where everything was confirmed and I was given a hospital date. Meanwhile, I was told I had to attend a slide show at the clinic. The slide show was called ‘To Janet a Son’. I sat in a room with nine or 10 older women who seemed to know each other or at least they talked to one another, men weren’t invited in those days. I sat by myself, I was too young and shy to talk to anyone. I watched the colour slide show. If I was frightened before I saw it, I was absolutely terrified after. As I walked home the inevitability sunk in – that was going to happen to me in a couple of month’s time. I felt like throwing myself down a quarry. A month later my hospital appointment came through... After the examination the nurse told me they didn’t have a bed for me at the hospital, so I’d have to have the baby at home. ‘Home’ turned out to be my new husband Anthony’s parent’s council house - three weeks after we’d confessed I was pregnant, we were married in Leeds register office by special licence. That’s what you did then! Forty people came to the wedding and the do was at the co-op. Mum and Syble (Anthony’s mum) shared the cost. We didn’t have a penny, Anthony was an apprentice motor mechanic and I was barely out of school.

So I gave birth to Yvonne in Anthony’s single bed, with Sister Bower - a big bustling midwife - shouting orders at the young student midwife while Ricky the dog barked and tried to bite her feet. Meanwhile, Anthony was downstairs trying to calm my hysterical mum. The birth was long but pretty straightforward and I had my nine-pound baby girl. Sister Bower handed the placenta in a kidney bowl to the nerve-wracked student midwife and she dropped it on the floor. The blood went all over the bedroom wallpaper and it stayed there for the next two years until Anthony’s parent’s had enough money to have it redecorated.

I wanted to make In The Club as real as possible, so we worked with a team of midwives who were there from script to screen. They were also consulted about the prosthetics (pregnancy bumps) which each of our pregnant actors had specially made for them. They were made out of a special type of silicone so that they were the right weight and feel, and were painted by artists assisted by the midwives. Sometimes by the end of the day the poor actors would be really physically exhausted from carrying about their prosthetic bump. But at least they could take it off at the end of the day!

I hope people watch In The Club and stay with it; the drama relies purely on the characters I’ve created and the situation they’re in. Hopefully it’s a situation most people will be able to relate to, even be familiar with, one way or another. Certainly it’s a situation your mother’s familiar with. It’s the drama of life itself and it could change your life. You might just decide to have a baby, or another baby as Katherine Parkinson did.

For me, birth still has to be the ultimate creation in life.