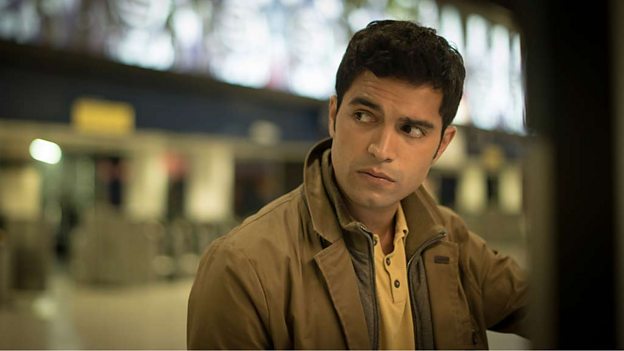 Martin is very ambitious. He’s joined the UNIT from MI6 and clearly intends on using it as a stepping stone to something better. Charlie De Melo

Tell us about the UNIT

The UNIT work undercover to survey and intercept some of the biggest and most dangerous criminals in the UK. Although they work with the police, the UNIT has quite a different agenda and ultimately uses its information to try to reach the very top of the criminal ladder. But this is often a great source of tension between the team itself when some members’ lack of patience and restraint risks compromising their ultimate goal.

Who is Martin and what role does he play in the UNIT?

Martin is very ambitious. He’s joined the UNIT from MI6 and clearly intends on using it as a stepping stone to something better. He’s had a very privileged upbringing with a private education and pragmatically does what he needs to do to progress up the ladder. In every respect, he’s the polar opposite of someone like Ash who has a very strong passion for the work and takes joy from making a difference.

How does Ash and Tommy’s arrival to the UNIT impact Martin?

Ash and Tommy’s arrival causes quite a divide amongst the UNIT. Martin knows that they’re needed on the team as they have such an instinctive understanding of the criminal underworld, something that Martin, as a very privileged person, does not. But it’s the methods that cause friction. Surveillance is very time consuming and requires great discipline and patience. It’s perfect for Martin, who’s fastidious in doing everything the right way in order to progress his career, but then Ash comes in like a wrecking ball with little regard for the bigger picture. Ash is so passionate and determined but quite tunnel-visioned and it’s something that Martin doesn’t take to too well.

Martin and Kim have worked together for a while but as time’s gone on, he’s developed feelings for her. However, Kim is predisposed towards people who aren’t always necessarily good for her and she’s almost a bit self-destructive in her partner-finding. Martin’s quite clean cut and safe from her point of view, so she doesn’t necessarily have the same feelings for him. Eventually Martin’s there for Kim when no one else is so she does take a bit of a shine to him but it’s not something she ever feels would be long term. It’s a very strange situation for someone so pragmatic and straight-laced as Martin. It certainly doesn’t fit with his plans, to be having an office romance.

How have you found the stunt scenes?

That’s been amazing! It’s unlike anything that I’ve ever been a part of before. The scripts are so ambitious and exhilarating that when you read them, you wonder how on earth they’re going to be brought to life. It’s been a big ask of the production team but they’ve pulled it off brilliantly. It’s been so much fun to film, for example to be running through Waterloo Station when it’s been completely emptied, shut down and filled with our own cast and O-T’s been jumping into giant vats of goo. It’s one of those things where you think, I shouldn’t be paid to do this!

For me it was the scripts. Sometimes it can be difficult to visualise a production just from the script but The Interceptor is so pacey, smart and exciting that it grabbed me from the first script I was given. They’re incredibly well written by Tony Saint and to have Farren Blackburn attached too was very exciting.

Has it made you look at the world around you in a new light?

It does do that a little bit. It makes you question things around you that perhaps might be a front for something else, or some people meeting up might not be as innocent as you think. There is a sinister underbelly to many things going on around us and it does make you think twice.