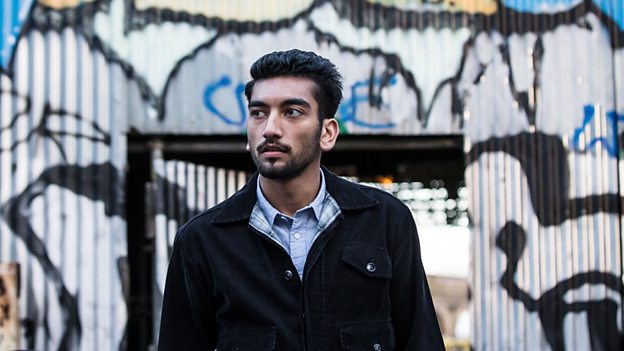 There’s a saying about the battle between ‘us versus them’ but the question is who gets to decide who is us and who is them?Sohrab Noshirvani

They soon bonded over a shared creative vision that was informed by their international backgrounds - Sohrab was born in Iran, and Rory hails from the UK. In 2013, their original feature script, From Here to Albion, was named on the Blacklist and purchased by Participant Media. In 2016, the duo sold their original feature script, The State, to 20th Century Fox. Informer, produced by Neal Street Productions, is their first original series.

How did you meet and start working together?

Rory: I’m originally from the UK and moved to New York where Sohrab and I were at film school together. We were in the same writing class and our first screen writing teacher told us to work together. She said; ‘stop bickering about each of your scripts and just work on them together.’ So that was that and we started working together.

Sohrab: She was right. We‘ve now been writing together for 10 years.

How do you write and work together?

Sohrab: The process of how we work together usually consists of one of us curled up on a couch crying and the other one trying to bring us back to reality. We actually sit at a computer together. We used to trade scripts and take a section each but then we realised that so much of our process is talking a story out and figuring out what the characters would or wouldn’t do and often arguing about it.

Rory: Overhearing us write together is literally one of the most boring, soul crushing things you could listen to. It’s eight hours of bickering but eventually it becomes the words on the page.

How did the idea for Informer come about?

Rory: For a long time the two of us had been interested in the relationship between spies and their handlers. We felt it was often misrepresented in movies and TV. It’s usually a James Bond type character who's running around doing everything whereas actually, the relationship between an informer and the handler is one of the key ways in which the ‘War on Terror’ is battled. We really wanted to tell that story.

The informant relationship has become a huge part of the arsenal within the way our security services combat the ‘War on Terror’. It’s a really complicated, sometimes fruitful, sometimes exploitative and sometimes duplicitous relationship and it's all of those things which our policing services rely on quite heavily.

We wanted to take what we all hear in the headlines consistently about the ‘War on Terror’ and tell the actual human story as opposed to spies, conspiracies and plots. How does it actually affect people who live in the city and how is London impacted by it?

We are definitely aware of the responsibility of weighing into these big issues in a TV drama. I don’t anticipate that we have got everything right but I do think that we have put a lot of thought into treating this with as much humanity and nuance as possible.

We want the audience to feel like they have taken a journey with someone whose story will surprise them and maybe contradict their expectations. The fact that it is complex is exactly why it needed to be written. A lot of movies and shows have treated this subject matter, even though we are 16 years into it, with an alarming amount of simplicity.

Sohrab: We liked the idea of stripping everything right back to focus on the relationship between these two men in their different worlds. Just their lives and the people around them. It’s the police world and the world of this young man being forced together and propelling a story. It’s not a show about an East London community, it’s about this one guy and his family and how they’re affected, how these two lives crash into each other because of forces outside of both of them. It’s a really complicated relationship, complicated enough to make a TV show, our first TV series in fact.

Our lead character is very modern. He’s a kid, he’s on social media, he’s bopping through the world and he sees himself as British, though he’s second-generation Pakistani. That’s one way that the world might define him but he doesn’t define himself that way. We really wanted to have a modern character at the heart of the show.

It’s also been a long process with this one. We’ve delved into research and the stories have actually changed over the time we’ve been working on it. It’s always been a living thing and has been allowed to change. We didn’t have a set story that we had to tell from the very beginning and that has actually helped to make it better and stronger.

This is a tricky subject matter but it doesn’t mean you shouldn’t discuss it. That is the worse option to me; to just forget about it and pretend it isn’t the world we live in. But at the same time, we need to de-mystify it and say this is a very human thing. These headlines mean that it doesn’t feel human. It feels like it’s happening elsewhere, being done by other people but it is just people.

What sort of research did you do?

Sohrab: The first thing we did was to read a lot of books. And then we talked to a variety of people to get different perspectives like police officers, the Islamic community, SO15, migrants, kids on the street, kids that had been in deportation centres. One thing that really surprised me and opened my eyes is that is not every cop agrees with every other cop.

In terms of getting the dialogue and characters right, we spent a lot of time in East London and lived there for a while. In our research there was plenty of dialogue that I couldn’t understand and some of the words were already out of fashion as we wrote the scripts. Street slang changes daily so we also needed to go away and make up the emotions. If the emotions are honest then the language will feel real. If you are honest about what a character does in a situation, it will make the dialogue feel authentic. Spending time in the neighbourhood talking to people and kids is all the work you have to do.

Rory: When you’re researching this topic you quickly learn how many different accounts, opinions and perspectives there are. Everyone will tell you theirs is the one truth. It’s interesting how the policies and practices have changed throughout time.

The ‘War on Terror’ itself is 16 years old now which is terrifying to think about but things have shifted and moved since then. Through every conversation we had and every book we read we consistently found that the police are driven by trying to keep people safe. Society sometimes calls into question and scrutinises their tactics and strategies, and we do in the show as well, but I think that's the consistent drive. I hope that's reflected in the show because we do have a great admiration for the work they do. We did uncover unanimously just how hard and impossible the job is.

The way in which Raza comes into the world of counter-terrorism and the way he is recruited came from a conversation we had with a police officer who said you are looking for people who are in vulnerable situations legally and what leverage you can exploit over them.

Why is cultural identity a major theme in Informer?

Sohrab: I’m a first generation Iranian-American so the idea of having two identities, especially with the character of Raza, was something we talked a lot about. Raza doesn’t go home to a very Pakistani household. There is Pakistani influence in his home but there is also British influence. For me, this is important, because when I go out in the street I just see myself as Sohrab. Not Iranian or American or a religion. There are 1.8 billion Muslims in the world and each one of them is different. We lose those that perspective when we talk about things from a 30,000 feet view. It is simply how you define yourself versus how the world defines you.

We looked at each character we wrote from every moment, creating them from the ground up. We went really far back and detailed in order to get it right and make it feel authentic. There’s a saying about the battle between ‘us versus them’ but the question is who gets to decide who is us and who is them? What if you think you are one of us but you are one of them? That is really the heart of everything in the show.

Rory: Identity is such a huge theme in Informer and we definitely go back to it again and again. In the world that we live in, the narrative is leaning more and more towards simplistic ideas and everyone is being boxed off; cops are like this, the Muslim community should respond like this etc. As we were writing, we felt that lines were being drawn in a narrative around us. We move through so many cultural experiences, no matter who you are, on a day-to-day basis.

The character of Raza draws from both of us in that he goes from one world to another and represents a different version of himself each time. This natural survival instinct that he has developed from living in London contradicts everything you hear in newspaper headlines. They try to make people as simplistic as possible. Gabe is the epitome of that - he is such a split personality and lacks understanding of his own identity.