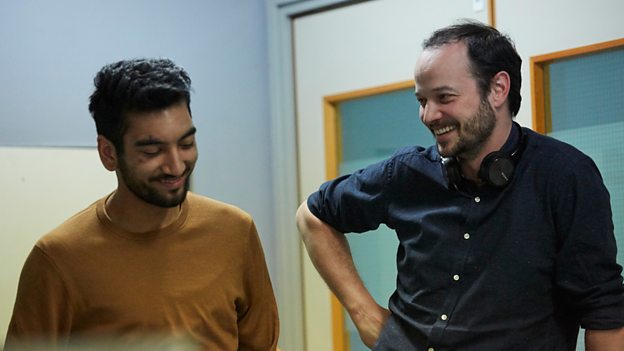 Informer is a character driven thriller, set in London. It is about the ‘War on Terror’ but told through the eyes of three quite unique characters.Julian Stevens

Category: BBC One; Drama
Julian Stevens is a television drama producer with over fifteen years’ experience in development and production.

After working as an Assistant Director on many shows, Julian moved into script development, working on two seasons of the new talent series Coming Up for Channel 4 before becoming Head of Development for Box TV. Julian developed and associate produced shows including The Last Enemy starring Benedict Cumberbatch and Robert Carlyle, The Wind in the Willows starring Matt Lucas and Mark Gatiss and Combat Hospital, showrun by the Oscar nominated Dan Petrie Jr.

After joining Artists Studio, Julian developed and produced the Bafta nominated BBC Two series The Fall by Allan Cubitt, starring Gillian Anderson and Jamie Dornan, directed by then newcomer Jakob Verbruggen (London Spy, The Alienist). Julian returned to produce the second season of The Fall before going on to produce The Tunnel: Sabotage with Kudos Film & TV for Sky Atlantic and Canal+, starring Stephen Dillane and Clémence Posey with lead director Mike Barker (The Handmaid’s Tale).

At New Pictures, Julian produced The Missing II, for BBC One, written by Jack and Harry Williams and starring Keeley Hawes and David Morrissey. Informer is the first time Julian has produced a show in his home town of London.

Informer is a character driven thriller, set in London. It is about the ‘War on Terror’ but told through the eyes of three quite unique characters. Raza is a young man who becomes an informant and Gabe is a cop, who along with his new partner Holly, runs the informants.

It’s a story of how Gabe, Holly and Raza fight the ‘War on Terror’ in a very street down level. The story starts when Raza gets caught in possession of a small amount of drugs on a night out. As a result, he ends up on the radar of two counter-terrorism cops who see him as someone they can apply pressure to and lean on. This show is about how Raza adapts to the situations he finds himself in after that. He’s pushed and pulled in different directions and his family life and friendship groups crumble. But, at the same time, he’s making new friends with people that he wouldn’t dream of meeting in the first place.

How does it differ from other ‘War on Terror’ stories?

One of the most interesting things about Informer is that it tells the story of an informant; how Raza is found, how he is coerced and how a strange sort of trusting relationship develops with his main handler Gabe. The two of them actually start to work together and relish the fight that Raza is leading the front on. The main thing that surprises me in this piece is how Raza becomes so good at the job. It is exciting to see him go to places that challenge him and push him as a character. ‘War on Terror’ is a term that gets used a lot in thrillers or detective murder series and in this case it would be used with very small letters. It is ultimately about what Gabe, Holly and the CTSU are doing and it’s told through the characters.

The writers have told Raza’s story and chartered his journey through some very dangerous and challenging worlds. He’s ultimately just a kid, just turned twenty something, still living at home with his Mum and Dad and that’s where the audience joins him. But where you find him six hours later is a huge journey for the character to go on.

How was filming in London?

The story being set in London was one of the key things that appealed to me. Not just because I was born and live in London but because I wanted to see my city shown in a way that it often isn’t. Parts of East London and the fashionable areas are shown on television but the less sexy, less glamorous locations go unnoticed. It’s in those hidden corners and in the shadows that this story comes alive. There are all shades of life, joy and happiness happening in London and we had a chance to go into those places and tell a compelling story. London’s a unique city, it has people from all walks of life, all cultures, all races and I think this show does to.

I don’t think you could have set the story in another city. London is so rooted into this piece that trying to fake it would have been counterproductive and would have lessened what we’ve got. It’s a big city to get around, it’s congested and noisy and not cheap but our team rose to the challenge.

It helped that we had knowledge of the challenges that London can present. We filmed in quite dense housing areas where there are a lot of people who don’t want to be disturbed. We reached out to locals early on to try to and involve them. We sat down with residents from Thamesmead in South East London and listened to their concerns. They didn’t want to be taken for granted and wanted to be engaged in the process. We came out of that with some brilliant supporting artists and really friendly local residents who let us use their houses as holding and rest areas.

Does Informer try to say anything about modern Britain?

It’s a given that the modern world has danger in it and sometimes you see it first-hand and sometimes it’s something you only hear on the news. There’s nothing to shy away from when you try and do a story about the ‘War on Terror’. It is the reality of a modern city like London that these attacks can happen randomly. When these things happen I always think about how many of them must have been stopped before.

The real Gabes and Hollys in the police work the angles, find the leads and join the dots. They have their listening posts, people like Raza, who they put out in the community to help piece together information that gets drip fed to them. If they, and we, are lucky they manage to stop attacks and keep us safe. That is heroic and the show is a testament to the work they do. We shine a fictional and entertaining light on some of that challenging work.

It’s also interesting to see Raza’s character going to the hipster flat in episode 1 and interviewing for a loft in a place that he’s been living in his entire life. These people have only been living there for a couple of years and the scenario is quite common to London now. People come in and make an area their own but that in turn pushes people out. Raza moves through those worlds and adapts himself to them every day. He rubs shoulders with members of his local communities and the newcomers.

How will Informer appeal to the audience?

Television is currently going through a golden age which is brilliant but also means there’s a lot of competition to try and make something original that looks and feels different. I hope the audience respond positively to the new faces that we have in the show as well as to someone like Paddy who is more familiar. He’s a brilliant actor and we don’t often see him lead a show. Mix that with Nabhaan who is a brand-new talent and holding his own very capably in the heart of this show and we hopefully have something that cuts through.

We’ve got two brilliant actors in our lead cop roles, Gabe and Holly, played by Paddy and Bel. They are a unique and odd pairing. I hope that their investigative double act is one of the things that will appeal to our audience. On top of that, and at its heart, Informer is a piece about family. The lives of Raza’s mum, dad and brother are twisted and turned upside down by the actions that he’s forced in to. I love the scenes between their unique family unit. We are not used to seeing families being disruptive, noisy and true on screen like that. If you sit at any family dining table there are arguments, jokes and tears which often get left out of television drama. But they feature in our show in spades.