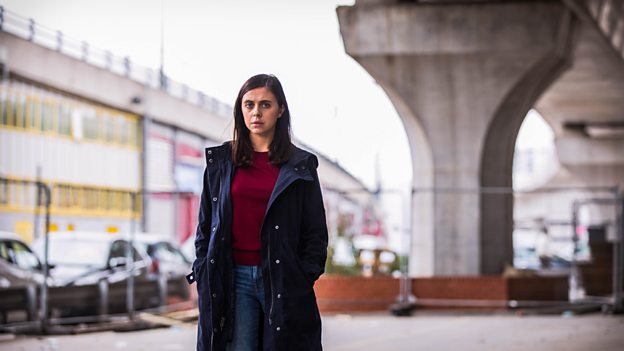 Gabe and Holly put Raza into some awful situations and what happens to him is their fault. Holly and Gabe aren’t heroes by any stretch of the imagination but you understand why they do what they do.Bel Powley

Category: BBC One; Drama
Bel Powley is a rising British actress whose work spans stage, the big and the small screen.

Powley will next be seen opposite Matthew McConaughey in Sony’s White Boy Rick, a highly anticipated crime drama from director Yann Demange, set for release in September 2018. Powley recently stared in Mary Shelley, in which she co-starred opposite Elle Fanning and Douglas Booth.

In 2015, Powley made her feature debut in the coming-of-age drama The Diary of a Teenage Girl. Powley starred as the title character in the movie based on Phoebe Gloeckner’s acclaimed graphic novel of the same name. Written and directed by Marielle Heller, the movie also starred Kristen Wiig and Alexander Skarsgard. For her role, Powley won the 2015 Gotham award for Best Actress and was nominated for Bafta, Independent Spirit and British Independent Film awards.

On television, Powley was previously seen playing one of the lead characters in CBBC’s show M.I.High. Additional television credits include appearances on UK shows Benidorm, Murderland, Little Dorrit, The Bill and The Whistleblowers.

Powley has appeared in numerous plays including her turn in Elephants at the Hampstead Theatre in London, the Royal Court Theatre’s West End production of Tusk Tusk, as well as Jumpy at the Royal Court Theatre. On Broadway, Powley starred as Thomasina in the 2011 revival of Tom Stoppard’s Arcadia at the Ethel Barrymore Theatre.

Can you describe Holly?

Holly is in her early twenties and has been fast tracked into the Counter-Terrorism Special Unit. It’s quite unusual for someone so young to hold such a role in the police force. She is a lateral thinker and sees everything in black and white. She loves solving puzzles, which is why she enjoys the job so much. If there’s a problem, she has to find the answers; that can also be her downfall as she can be unemotional.

What is the Counter-Terrorism Special Unit?

In the show, the CTSU is a special unit, albeit a fictitious one. You have to be smart but also able to think in a different way. The team also need to be ruthless because a crucial aspect of the job is finding informants. They have to find people on the street who have not necessarily committed any sort of serious crime and then force them into working as an informant.

What is the relationship between Gabe and Holly?

Holly is put with Gabe on her first day in the unit. Through their work, and their love for the job, they do start to form a friendship and mutual respect for each other.

Holly respects Gabe for being effective at his job. She is annoyed and fascinated by how Gabe works because it is in a different way from her. During the series, Holly realises that Gabe is hiding something and has a secret. Holly does not like secrets - she hates not knowing things and is ruthless in her pursuit of the truth. Her sister calls her ‘the bloodhound’. What’s so brilliant about this whole show is that nothing is black or white. It’s not a question of whether Holly trusts Gabe or not because she does trust him in certain elements of their relationship. There are a lot of grey areas in this show, which is what makes the storytelling and these characters so great.

What do you find most interesting about Informer?

Informer tackles the subject of the ‘War on Terror’ from an angle that’s never been approached before. It’s often about heroes catching villains, but in this show there are no heroes or villains. Informer is about a diverse group of characters who are inextricably involved in this world. Gabe and Holly are there because it’s their job and they believe in protecting the society they are part of, whereas Raza finds himself involved and he’s got nothing to do with terrorism. Gabe and Holly put Raza into some awful situations and what happens to him is their fault. Holly and Gabe aren’t heroes by any stretch of the imagination but you understand why they do what they do.

The show is set in London and it feels exactly how London is now. The 'War on Terror' is such a part of our lives but we still go about doing everything the same. There isn’t a moral life lesson that should come out of watching Informer - it shows you how we as a city are dealing with this issue now, and how it’s affecting people.

What is most exciting to me about the show are the characters; their different backgrounds and cultures. The characters are so well written and really reflect the population of London. It’s an exciting story that truthfully reflects how things exist right now.

What were the stand out scenes for you?

There is a scene where our team are watching something on CCTV and we have to put on our bullet proof vests and get down there as fast as we can, almost like a raid. The scene looks like it was live because they shot us watching it for the first time. It was super tense because we didn’t know what was going to happen on the CCTV. It felt incredibly real and like we were actually there. There is an element of realism in the show as it is about surveillance. There’s a lot of filming from high angles, up in apartment buildings that are hundreds of feet away or from CCTV angles in the corners of rooms. You really get that sense of being watched.