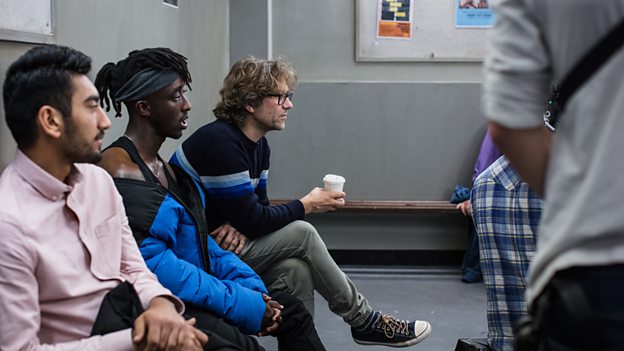 Following Raza’s predicament and telling the story from his perspective does the complete opposite of exasperating or playing to people’s fears.Jonny Cambpell

Category: BBC One; Drama
After studying French and German at Durham University, Jonny began his TV career at Granada TV working on documentaries before moving into drama, and has been the architect of a wide spectrum of ground-breaking and high profile television series from Peter Kay's Phoenix Nights to the first series of Paul Abbott's Shameless, Ashes To Ashes, Spooks (MI-5) and fan-favourite Doctor Who episode Vincent and the Doctor written by Richard Curtis, which was nominated for the Science Fiction and Fantasy Writers of America Bradbury award.

After more Bafta wins for cult BBC Three zombie drama In the Flesh (Best Mini Series/Writer) Jonny went on to direct the adaptation of JK Rowling's The Casual Vacancy for BBC One, an Emmy award-winning episode of Westworld (HBO) and Peter Moffat's 1960’s colonial drama The Last Post (BBC One) before embarking on Informer (BBC One).

Informer is a very personal, human story told from the ground up. It’s epic while remaining intimate and it’s that combination which makes it so compelling. The show focuses on the blurry, imprecise and foggy front lines of the ‘War on Terror’ where teams of people out on the street are becoming a new part of the police service.

It’s an antidote of sorts to the flagship, glamorous Homeland-style ‘War on Terror’ TV show. Informer unplugs that high octane, over excited story which the subject matter tends to attract and makes it more earthy, full of humour and warmth.

The plot of Informer is actually a straightforward one, it’s a rite of passage story. A young guy in East London gets entangled into a counter-terrorism espionage storyline, completely out of the blue. We follow his experience through that and how well-meaning actions lead to unintended consequences. As each episode goes by the story seems to accumulate in size, complexity and texture as it drives towards its conclusion.

What stood out about the script?

One of the things that struck me about the script right at the beginning, is how it set out really clearly that it wasn't going to be an earnest show. Informer is not a comedy, but life throws up so many humorous situations and the scripts take the time to let those things happen and to let us enjoy and relish those moments. The human characteristics in the script also make you smile because they are so well observed.

What are the main themes of Informer?

The main themes are utterly universal - about family and loneliness on the one hand and trust and deceit on the other. The context of the story is about counter-terrorism and the very notion of informing and then within that it’s what you learn about humanity and human nature. The writers are also very keen for this to be about how people aren’t perfect; inevitably they have flaws.

One of the references I used for this story was The Lives of Others, the film about Stasi surveillance and how it impacts on people’s personal lives. It looks at how people have to behave in a different way when they’re put in that situation. It was a big influence for me while working on this show and I was interested how it might apply to the present day in a contemporary family.

The very fact that the writers have a transatlantic sensibility - a Yorkshireman and an American Iranian - is part of what injects so much life and originality in to it. It feels very accurate and contemporary (something all the young cast were particularly drawn to) and their unique, combined experience forges the show together in a very confident way. Part of what’s unique will be its charm and the small scale heroism, the curiosity about what’s happening in London amidst its various peculiarities. If you don’t live in London, or in this country, hopefully we portray the capital in a way that hasn’t been seen before and that will appeal.

What did you want to achieve when filming Informer?

The Cinematographer, Tony Slater Ling, neither of us fans of style over content, didn’t want to impose a style before we really knew what the show was. We know which visuals we like aesthetically and what excites us about a camera style when approaching the story-telling, but here we needed a look that would be able to change through the course of the season. We wanted to portray London in a cinematic but recognisable way and highlight the vibrancy and colour of the communities where the story takes place. From my point of view it was a six hour film, but I wanted to make sure that each episode had its own flavour, its own characteristics. We wanted to see Raza as if in a pinball machine; being bounced from dangerous situations to awkward personal or domestic ones - with an erratic pace to match.

Could you tell us about Gabe?

Gabe is a counter-terrorism officer who was previously an undercover officer. He manages a series of random ad hoc informants that he has collected and coerced to gather intelligence together. There is no one other than Paddy Considine who could have played Gabe’s complexities and anguish quite like this. He was created and designed by the writers to be an intriguing character and Paddy was a force of nature on set. He is a one off actually. I’ve never worked with anyone like him and it was fascinating to observe him crafting the character.

Could you tell us about Holly?

Holly, who comes in as Gabe’s bright young sidekick, is also a force of nature but in a very different way. She is sprightly and full of youthful impetuosity, which is infectious but also dangerous. That is what makes her so compelling to watch. She immediately turns her detective talents and instincts onto her partner and starts digging. Bel was fantastic.

How would you describe Nabhaan’s performance?

Nabhaan learnt on the job, as Informer is his first TV role, and he was a phenomenon. It’s all thanks to our amazing casting director, Julie Harkin, that we found him. She had highlighted him at a very early stage and had uncanny insight into his potential - seeing the unseen, the germination of something. Nabhaan has grown with the show and been so diligent. He is the soul of the show. He is also very expressive, you feel for him, he forces you to.

One of the most exciting things as a Director is meeting new talent and new faces and there’s been no shortage of amazing actors on this show and throughout the casting process. It’s been a real privilege and it's what inspires me on a daily basis.

What was your approach to casting Raza?

I was always keen to cast an unknown for that part which was always going to be a bit of a calculated risk. But the benefits far outweigh the risks. At the same time, we did need Nabhaan to jump through some hoops before we cast him in terms of road testing and getting him to prove that he could do it.

Nabhaan and Roger came together to read some scenes and that is when it started to sparkle. We ran through all sorts of scenes with him and tried different looks. He was an utter professional from day one. He knew his lines back to front which is key when you are trying to play around with a role. We did a lot of workshops with him before finally giving him the part and he just grew and went from strength to strength from day one.

Tell us about some of the other characters?

Dadir is another character that lights up the screen. Roger Jean Nsengiyumva was a revelation. His character is described as being a hand grenade and he lived up to the billing. But more than that, his ability to surprise us, keep us amused and to own the screen is phenomenal. Sadia is Raza’s mum who is played by Sunetra Sarker. She is an amazing actress whose attention to detail is second to none. She is always pushing the boundaries, always searching for the truth. The utter precision of her emotional storytelling was a joy to behold. Similarly, Paul Tylak playing Hanif is like a Shakespearean fool. He was a wonderfully drawn character in the first place but what Paul injected into it was so surprising and full of humanity. Watching Jessica Raine is a master class in acting, she is absolutely amazing.

Was having London as a location important?

London is a very central character in this story and it has many faces. One of the things I’ve enjoyed about this process is falling in love with London again. I have been introduced to so many different areas, aspects and communities. There are so many thriving, vivid, vibrant and colourful places in the city which we have tried to reflect in the show. We have tried to show places that you would not usually see in television dramas.

It’s inevitable that a series like Informer needs to be dramatic, it’s inherent in the concept. However, we don’t play fast and loose with terror or with fear and tension. It does the complete opposite, because we put a character in the centre of it all. The show educates us about understanding the complexities of people and that there isn’t a quick fix to the problem. In turn that should empower people to not be afraid. Following Raza’s predicament and telling the story from his perspective does the complete opposite of exasperating or playing to people’s fears.

Recent events in politics are quite worrying and it’s a shame that we have come to the point where it is necessary to have a system like informing and informants. We can only hope that the need for it will dissipate in due course but I don’t think we should take it for granted. To avoid having informing, we need to be more tolerant. That’s broadly why we are in this position and if the show can enlighten people about that then it has gone some way to making people see things in a different light and how the so-called ‘War on Terror’ affects different communities in different ways.