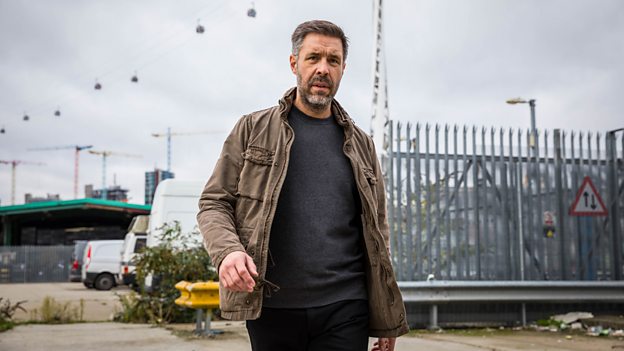 Going that deep into his undercover work has left a scar on his psyche. He definitely carries around the weight of the work that he does and is always running away from things about himself.Paddy Considine

Category: BBC One; Drama
Acclaimed actor, film director and screenwriter Paddy Considine’s many credits as a performer include Dead Man’s Shoes (which he also co-wrote), A Room for Romeo Brass, The Girl With All The Gifts, Miss You Already, Macbeth, Child 44, Pride, The World’s End, Submarine, The Bourne Ultimatum, Hot Fuzz, PU 239, Cinderella Man, My Summer of Love, In America, 24 Hour Party People and Last Resort. His television credits include the title role in The Suspicions of Mr Whicher, Peaky Blinders and Red Riding.

He wrote and directed his first feature film Tyrannosaur in 2011 winning great critical acclaim along with numerous awards such as the Bafta for Outstanding Debut, the BIFA for Best Independent Film and the World Cinema Directing Award at Sundance. Previously, Dog Altogether, which he also wrote and directed, won the Bafta, the BIFA for Best Short Film and the Silver Lion from Venice Film Festival. His next feature Journeyman, which he has written, directed and will also be starring in, will be released later this year, further to that, he can soon be seen in Adrian Shregold’s Funny Cow and The Death of Stalin. Most recently he lead the cast in Jez Butterworth’s new play The Ferryman at the Gielgud Theatre, directed by Sam Mendes.

Can you describe Gabe?

Gabe is very secretive and covert. He has worked undercover for many years and most recently with a right-wing gang of skinheads. Going that deep into his undercover work has left a scar on his psyche. He definitely carries around the weight of the work that he does and is always running away from things about himself. He is actually a bit of a ghost and isn’t particularly comfortable anywhere; not at home or at work. In order to survive in that kind of world you've got to be very direct but I think Gabe sometimes takes himself a little too seriously. He is good at his job and a very singular minded character when he has to be but there is a lot of noise in the background. He’s a bit of an actor; able to go undercover and take it to an extreme place. But, he does have his limits within that world and finds his undercover life difficult to let go of. There’s a part of him that enjoys letting himself off the hook and being somebody else. Gabe is so shielded that it’s hard to find something to like about him. It’s only when he starts to reveal his human side that I start to engage with him more.

There are certain rules about how to operate with informers; you can’t be friends because you have to be able to drop them at any moment. You can’t become intimate and you have to remember there is a professional relationship. But sometimes that can teeter into the personal. That starts to happen with Gabe and Raza. Gabe starts to respect and feel affection for this young kid when he sees how good he is at getting himself in and out of situations.

What were your favourite scenes to film?

I flourish in the scenes of interaction between people who are having a conversation. The scenes where Gabe comes alive are the more personal scenes with Raza, Holly and Emily. Those are also where I feel like I am contributing as an actor. Some of those scenes have been fantastic.

Can you describe the layers of relationships in Gabe’s life?

There is a whole web of people in Gabe’s life. He is always juggling different elements and playing different roles. He’s entrenched in these worlds and it's hard to figure out when he is being the most truthful because he's balancing so many lies about himself. Over the course of the story things start to fall down and his identity begins to crumble. His covert life starts to infringe on his personal life and it becomes a threat. I think that's when he finds out how much he really cares about the people at home.

Holly, who is very new to the job, slowly starts to break Gabe down. He finds an admiration for her because she does everything by the book and is a fantastic observer. The same is true for Raza. Gabe spots his potential and as a result steals him. He sees himself in Raza and starts to develop an affection for him. He also feels guilty for drawing the poor kid into this world which is like a dark web that you can’t get out of.

Lastly there's the sexual relationship with Sharon from his past. Gabe creates an elaborate lie to cover it up, saying he works away in Florida. However, as with any kind of lie or suppression, it starts to over spill and eventually Gabe begins to crack.

How did you find working with Nabhaan?

I didn’t check up on what he’d done before, I’m not that kind of person. I just meet people and work with them. It doesn't matter to me what anybody’s experience is. But I was very surprised to find out that it was his first job because, as far as I am concerned, he’s a natural. He is a very talented and instinctive actor. It’s not like he’s even trying to find his way with it, you don’t see him struggling, he has just taken to it.

What are the demands of Gabe’s job?

Gabe works for Counter-Terrorism, so it is a pretty high alert job. You have to be prepared to show up 24 hours of the day. They are constantly trying to prevent terror attacks on UK soil and so are always on the lookout for suspicious activity. They have to weave their way through the underbelly of it all, trying to find links and anything that can prevent an attack. Gabe doesn’t have any superhero delusions about what he does, he’s a realist, and is very aware of what his job is. But there is something very addictive about that kind of work and he just wants to keep on doing it.

Does Gabe value his informers?

His informers are very important to him. They are the people on the street, in the newsagents, in the butchers or wherever it may be. They are the guys hearing all the talk and comings and goings. It's important to have these informers down there on the street level who are in and amongst it all. Gabe can't march down those streets and ask questions so he has to have these people around. It is important for him to be able to go to these territories, pay people off and get any tiny bit of information that he can. There's this whole other world of informants who are scattered across London and Gabe uses them all the time. It’s important for him to have somebody on the ground who has a rapport with these communities.

Does Gabe go by the rule book?

Gabe lies to a lot of people, including his superiors, but he isn't underhanded about it and he doesn't rough people up for information. He is respectful of his informers. In a way he does go by the book but there is always that shadowy side of him. He has to balance the lies that he has created in his life and and at some point they are going to come back and bite him. Gabe is legit in many ways but he has dug his own grave.