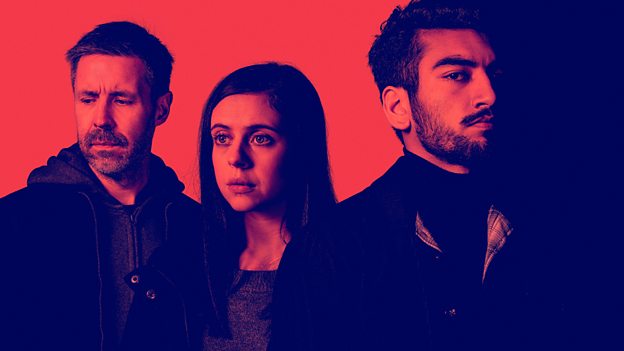 Category: BBC One; Drama
Informer is a complex, character-driven thriller about Raza, a young second generation British-Pakistani man from East London (Nabhaan Rizwan) who is coerced by Gabe, a Counter-Terrorism Officer (Paddy Considine) into informing for him.

Gabe, who has a past he wants to remain secret, is joined by Holly, his new and ambitious partner (Bel Powley) whose endless curiosity becomes a threat to him.

As the central counter-terrorism investigation heats up, the stakes for all three, their families and relationships, get higher and higher.

Informer tells a story about identity in a world where lines are increasingly being drawn and sides are being taken. What happens when you, or your friends, family or neighbours fall on the wrong side of that line and the personal becomes political?

Raza Shar (Nabhaan Rizwan)
Raza was born and raised in East London. At home he is a good son and big brother, but depending on what other post code you find him in, Raza can easily transform into a hipster, a street-wise hustler, or a heady intellectual.

His ability to seamlessly glide through different worlds brings him to the attention of London’s Counter-Terrorism Special Unit (CTSU). When the police discover someone in his family is living in the UK illegally, the threat of deportation is enough to persuade him to become an informant.

As his CTSU handlers push him further and further into the fog of war, Raza begins to lose a sense of who he really is and he realizes he has entered a world from which there is no easy way of returning.

DS Gabe Waters (Paddy Considine)
As a young man, Gabe enrolled in The Met's Special Branch Undercover program and was selected to infiltrate the far right movement in Yorkshire. At a time when most young men are struggling to figure out who they are, Gabe spent five years deep undercover where he created a whole new identity in order to survive.

Now, working as an officer in London's elite CTSU, Gabe uses his chameleon-like ability to navigate the murky war on terror. As a handler to a legion of East London informants, Gabe must do whatever it takes to gather sensitive information - coerce, persuade, charm or manipulate. Gabe switches easily amongst his various roles - husband, father, mentor, protégé, cop, zealot, and has succeeded in maintaining his previous undercover life.  But as his worlds begin to collide, the intricate barriers he's created come crashing down. This leaves Gabe facing the one question he fears most: which version of Gabe is actually him?

DC Holly Morten (Bel Powley)
Holly is one of a new generation of police officers that make up London’s thin blue line; a Millennial who grew up in the age of the internet. A world of text messages, emojis, search histories and social media. A world of no personal boundaries. For her, the war on terror is not a battle, it is a permanent state of being.  Holly did not join the force out of idealism; she wears the badge because she’s really good at it. She blitzed through police training college at the top of her class, and after a brief stint in Special Crimes, she was hand-picked to join London’s elite Counter-Terrorism Special Unit.

As Gabe’s partner, she quickly learns that recruiting and handling informants is not as simple as win or lose. To manage an informant is to engage in a battle of human emotions.

DCI Rose Asante (Sharon D Clarke)
An Oxbridge graduate who could’ve walked into a job at any consultancy firm, Rose instead signed up to join the Metropolitan Police. She was the only female officer of colour in her unit at a time when race riots were raging in Brixton and the National Front were getting candidates elected in local government. But Rose’s idealism and her unshakeable faith in her cause kept her going through these turbulent times.

As a DCI in London’s Counter-Terrorism Special Unit, Rose believes that the ends always justify the means. A brilliant mind, Rose can be manipulative, loving, maternal, and intimidating in equal measure. She’ll do whatever it takes to keep the good people of Britain safe.

Emily Waters (Jessica Raine)
Emily never saw herself as a copper’s wife, but then she never saw herself as a borderline alcoholic living in middle-middle England either. In marrying Gabe, she agreed never to ask about the confidential nature of his work. But she becomes increasingly disturbed when it’s clear the secrets he’s keeping from her are about more than just the case in front of him. As her trust falters, she begins to ask questions that could unravel her life and family. Just how much is she prepared to compromise to hold onto what she loves?

Dadir Hassan (Roger Jean Nsengiyuma)
Third generation British-Somali, Dadir, was raised in the concrete tower blocks of East London. Charismatic, ebullient but a half-cocked hand grenade, any interaction with Dadir could end in a hug or a fist fight.

Sadia Shar (Sunetra Sarker)
Sadia’s sharp humour papers over her complex past. When Hanif’s wife and birth mother of Nasir and Raza died, Sadia gave up her studies and stepped in to raise the young boys as if they were her own, outstaying her student visa and taking on all the risks of a fake identity. But now that her boys are nearly grown up, Sadia faces a harsh truth - who have the young men now become and will she still have a part to play?

Nasir Shar (Reiss Jeram)
Top of his class, but last to be picked on the football field, Nasir is at that unfortunate age where his quick wit and studious mind are more a curse than a blessing. A loner with few friends, a drunk father, and an absent older brother, Nasir is a lost young man in search of a role model. But if he can’t find a good example to follow, there’s plenty of bad ones waiting in the wings.

Hanif Shar (Paul Tylak)
Hanif is a very vocal armchair social warrior, and reads every paper he can get his hands on, but even if the world is on the brink of collapse, he’s usually too drunk to do anything about it. He likes to joke around but his drinking masks the deeper pain of having lost his wife.