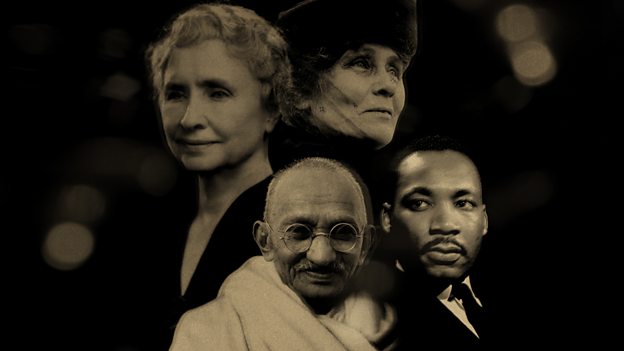 To my mind the greatest figures of the 20th Century are those that fought for a world in which we’re all equal.Sanjeev Bhaskar

In the fifth episode of Icons, Sanjeev Bhaskar learns about the powerful legacy of four top activists: Emmeline Pankhurst, Mahatma Gandhi, Helen Keller and Martin Luther King Jr. In a century where empires gave up their colonies and old prejudices were overturned, Sanjeev argues that an activist should be crowned the public’s icon of the 20th Century. But who deserves your vote?

Breaking the rules, disrupting political meetings and heckling cabinet ministers, the rage of suffragette women shocked Britain. Emmeline Pankhurst was passionate about giving women the power to vote and formed the Women’s Social and Political Union. Pankhurst united campaigners from around the country to organise the largest march that country has ever seen in 1908. Sanjeev talks to historian Diane Atkinson and Pankhurst’s great grand-daughter, Helen Pankhurst, to learn more about an unprecedented rebellion and Pankhurst’s incredible perseverance.

Mahatma Gandhi shook the foundations of the British Empire to achieve independence for India. He began a campaign against 200 years of exploitative British rule. He led non-violent national strikes and non-cooperation on a scale the world had never seen before. Sanjeev speaks to Gandhi’s great-grandson and director of the Gandhi Foundation, Tushar Gandhi, to learn more. And, independence came at a great price for India. Over ten million Hindus and Muslims were displaced and millions died along a new border between India and Pakistan. This story is very personal for Sanjeev as his own parents were caught up in Partition.

The next icon Sanjeev presents is Helen Keller, who saw the world very differently to most. She changed people’s perceptions of what differently abled people could achieve. She became the first deaf blind woman to graduate from university and began a lifetime of activism. Sanjeev meets with Keller’s biographer, Kim Nelson, and Helen Selsdon, the Keller Archivist at the American Foundation for the Blind, to learn more about how she campaigned tirelessly for disabled, deaf and blind people. Her belief in equal opportunity attracted attention from anti-communist governments of the time. The FBI held a file on her activities and her books were burned by the Nazis. Nonetheless, Keller was a trailblazer who helped to create a world in which disabled people having access to education was no longer seen as exceptional.

For hundreds of years segregation was part of American life in the south. Martin Luther King Jr used his passion and charisma to turn a local campaign into a national protest. From the bus boycott of Alabama, Martin Luther King Jr went on to galvanise millions of people to demand the freedom they deserved. Despite facing death threats and bombing attempts on his family home, he passionately believed in non-violent activism. Sanjeev meets Dr Derryn E. Moten, campaigner and historian, and Bryan Stephenson, human rights lawyer. Martin Luther King Jr didn’t stop when segregation was legally ended in 1964. He tirelessly campaigned against poverty and literacy and other issues that blocked the black community from exercising their new right to vote, until his assassination in 1968. 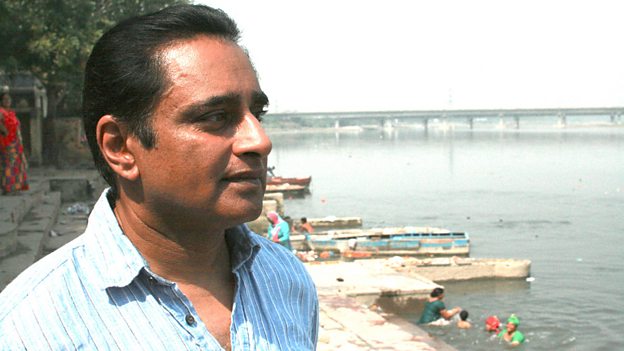 To my mind the greatest figures of the 20th Century are those that fought for a world in which we’re all equal.

The four icons I’ve looked at were complex people - dogmatic, single-minded, solitary, dangerous and at times even unlikeable. Four people with the strength and charisma of true activists. Four people who changed the course of history.

Why are you so passionate about Activists as a category of Icons?

They were all freedom fighters who understood the complexities of the 20th Century. This was the century when empires gave up their colonies, draconian laws were rewritten, and old prejudices overturned. It was a period of seismic social change led by people who were unafraid to speak truth to power even at terrible personal cost to themselves. It’s through their sacrifice that we enjoy the protections and freedoms we have today. None of them were the first to highlight their cause - but these four stand out as true icons - and remain instantly recognisable, shorthands for the battles they fought.

For my money, the greatest icons of the 20th Century are the activists. They were trailblazers who gave dignity to the debased and helped move power from the few to the many. They didn’t just stand for what they believed in, these were people that at great personal cost inspired thousands, millions to do the same as them.