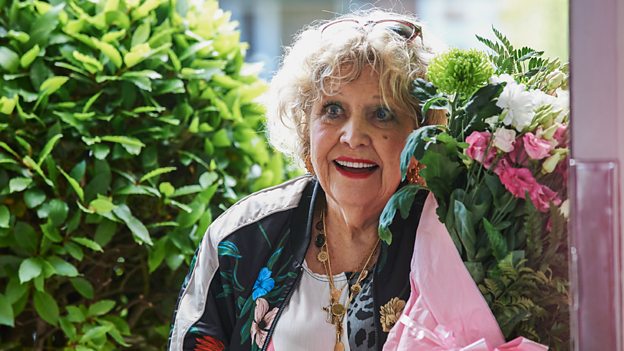 I was playing the drums the other day. I even got a lesson from a drummer from the orchestra at the London Palladium. I’m getting so many great opportunities in this part.Anne Reid

How would you describe your character in Hold the Sunset?

Queenie used to be Edith’s char lady. She’s had three husbands and travelled all over the world. She is still very vibrant and refuses to accept she is getting older. Instead, she uses phrases like, “My knees aren’t as enthusiastic as they used to be.” It’s glorious!

How does Queenie become involved with Edith’s family again?

Roger has the mad idea of giving Edith Queenie’s services for her birthday. Edith is appalled and Phil would rather get rid of her, but Queenie is not a person you can get rid of very easily. She doesn’t need the money, but she likes the idea of working for Edith.

Queenie has quite an “out-there” look, doesn’t she?

Absolutely. She has a wild look and wears far too much jewellery. I keep telling the make-up artist: “Put more on!” I want her in shoulder pads and everything! The last time I played such an extreme character was on Shameless when I was a drunken old lady with too much make up. This is such good fun!

Have you had to do some outlandish things in this role?

Yes. I was playing the drums the other day. I even got a lesson from a drummer from the orchestra at the London Palladium. I’m getting so many great opportunities in this part. Queenie is an absolute joy to play.

How would you describe the comic set-up of Hold the Sunset?

Edith and Phil are reasonably normal people, and then you have a slew of slightly insane characters circling around them. Roger is off the wall and his wife is totally barking. It’s a really good approach; the two main characters are funny, but not as wild as the rest.

Beforehand, I thought: “Is he going to be like Basil Fawlty?” But of course, he is nothing like that - he is absolutely adorable. He’s so amusing on set. We do one take, and he then says, “Right, lunch!” We’re all having such a good time. John has just tweeted that this is the happiest company he’s worked with.

Were your fan of his work?

Of course! I was a massive fan of Fawlty Towers. Who isn’t? God knows how many times I’ve seen that show! John is a genuinely funny man.

Finally, did you have any inkling of the global success of Last Tango in Halifax when you started working on it?

Definitely not. I never saw that coming. I thought it was a lovely part, and I knew the scripts were great, but you can’t predict these things. It just suddenly caught fire all over the world. I think it worked so well because it’s got such humanity. In Hold the Sunset, Edith and Phil are two older people enjoying a love story. I’d like to think that Derek Jacobi and I started that fashion in Last Tango in Halifax.