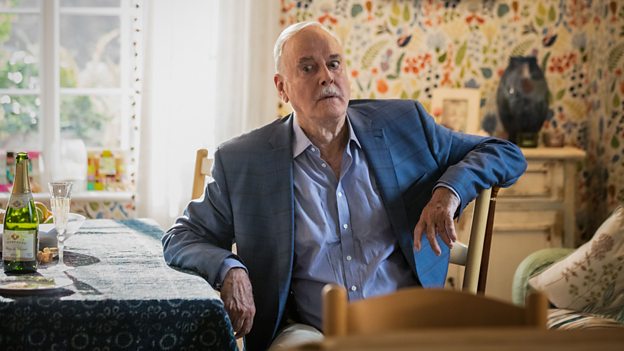 I’ve only just realised that Phil is almost exactly like me! When you stop reading it and start playing it, you can immediately see that.John Cleese

What drew you to make your first BBC sitcom since Fawlty Towers 44 years ago?

The producer Humphrey Barclay is an old friend of mine. We’ve known each other since 1961 when we were both in the Cambridge Footlights. He came to me and said he had found this great new script called Hold the Sunset by Charles McKeown and asked if I would be interested in doing it. I read it and loved it. It was the best script I’d read in a hundred years! So of course, I said yes immediately.

You have known Charles for a long time, too, haven’t you?

Yes. I have worked with him many times. He played Mr Ingrams in Fawlty Towers. And in The Life of Brian, he played the blind man who throws away a stick and says, “I was blind, but now I see,” and then promptly falls into a pit. He gets the biggest laugh in the movie!

How would you describe your character in Hold the Sunset?

I’ve only just realised that Phil is almost exactly like me! When you stop reading it and start playing it, you can immediately see that. Phil sits around making sarcastic remarks - that’s exactly how I am in real life! I keep thinking: “I know how to say that line because that’s exactly how I’d say it in real life.” It’s been an absolute pleasure to play him.

Are there other sides to Phil?

Yes. He’s also capable of great tenderness. He’s really in love with his old flame and current neighbour, Edith. She is this lovely woman. But when her son Roger returns home having left his wife, Phil starts to get very worried indeed. The sudden possibility pops up that his relationship with Edith might not work - and that scares the heck out of Phil.

You first worked with Alison Steadman, who plays Edith in Hold the Sunset, more than 30 years ago, when you portrayed a husband and wife in the movie Clockwise. How have you found it being reunited now?

It’s been complete heaven. It’s nice to play affectionate scenes every now and again, and I don’t have to act affection with Alison. She is absolutely lovely and highly entertaining.

Do you feel any pressure on Hold the Sunset to live up to the phenomenal success of Fawlty Towers?

No, because I’m not writing this. I come to Hold the Sunset just as an actor. It hasn’t been my creation. Instead of looking at me and three others on Fawlty Towers, the audience have five or six other key players to watch in Hold the Sunset.

Is it similar to any of your other work?

I see a parallel with A Fish Called Wanda because in that film, Jamie Lee Curtis and I were the emotional centre. In the same way, Alison and I provide emotional the heart of Hold the Sunset, and the other three - Jason, Joanna and Rosie - are funnier than we are. I’ve never minded that. If you have a scene that everyone laughs at, it doesn’t matter who’s getting the laughs.

How would you sum up your experience on Hold the Sunset?

It’s been absolutely wonderful. I’ve never seen so much laughing on set. In fact, there has been more laughing here than on any other set I have been on, even Monty Python. Anne Reid, for instance, has the wickedest sense of humour! Whenever I make awful comments about work, she is so funny. There is a great warmth amongst the cast and crew here. It’s been a very, very happy experience.