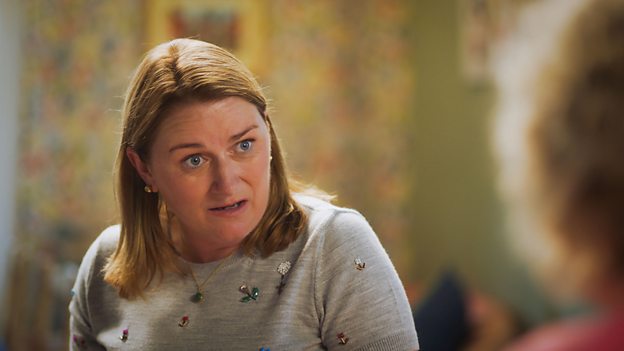 We’ve had such a laugh on this project. It’s a great relief because some comedians are so serious about their work!Rosie Cavaliero

How would you characterise Wendy?

She came out of the womb cross. She feels that life has dealt her a bad hand and that it is everyone else’s fault. She won’t look on the bright side at all. The funny thing is, she thinks that everybody really likes her, but sadly that’s not the case in the slightest. I have loved playing Wendy. This part is such a gift for an actor.

Run us through her relationship with Roger.

At first, you think Roger is such a twit. Then you meet Wendy and you think, “I can see why he left!” She’s very passive-aggressive. They are perpetually falling out and don’t really like each other at all. But they are actually made for each other because they both blame each other for their failings. I think they’re lucky to have found each other, because I don’t know if anyone else would have had them!

How do you find the right tone for this comedy?

The idea is that Edith and Phil are not mad, but everyone else is. We’re trying to play believable, real people who have been pushed to a slightly extreme place. I think there is real mileage in this series. Most of the characters are mad so they could go anywhere.

It has been fantastic. We’ve had such a laugh on this project. It’s a great relief because some comedians are so serious about their work!

How do you think Hold the Sunset will be received?

I hope people will react as I did when I first read the script and say that it’s a brilliant comedy. But we can’t take anything for granted. We have to keep reminding ourselves that comedy enrages some people. They don’t get angry about drama. But if you dare not to make people laugh with your comedy, they get furious about it!

Was working with John one of the draws of Hold the Sunset?

Absolutely. I’m a fan of everyone on the show, but I’ve been a fan of John’s for years. Like everyone, I was a huge fan of Fawlty Towers. I texted Jason beforehand and said, “Do you know who we are working with on this?” and he replied, “I know!” It’s really thrilling to be in this company. Every day I’m here, I have to keep pinching myself!