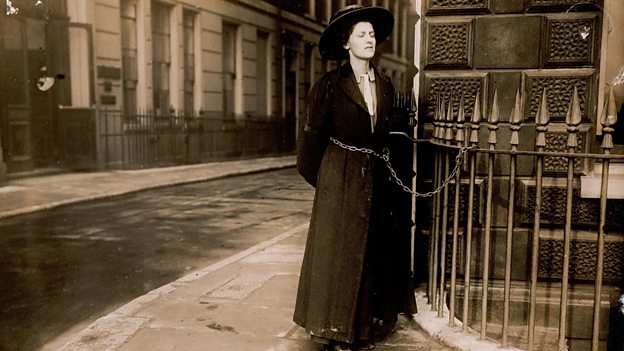 100 Years of Votes for Women

How Women Won the Vote With Lucy Worsley

February 2018 will mark 100 years of women in the UK being allowed to vote. Today in Britain, this democratic act feels like a basic human right, but as Lucy Worsley will reveal in this 90 minute special, the battle that women had to wage for this right was complex and hard-fought.

Using original source materials to piece together a captivating telling of the forgotten stories from this period of history, Lucy will explore the range of people who fought for the vote - young and old, rich and poor, men and women, from all over the country - some of whom decided to go against every rule and expectation that Edwardian society had about them.

She will reveal what life was like as a Suffragette being tracked by a special police unit, explore the horrific prison conditions that these women were sentenced to as well tell the story of some of the unsung heroes and heroines who helped women to reach full equality at the ballot box.

With the help of letters, diary entries, newspaper articles and formerly classified documents, Lucy will immerse us in the story of women on the run from the police, hunger strikes, arson, harassment campaigns and family fall outs on one side with espionage, force feeding, news media bias, police surveillance and government intransigence on the other, painting a vivid and timely depiction of this landmark moment in British History.

Lucy says: “I’m thrilled to be marking the 100 year anniversary of women getting the vote with this 90 minute film for BBC One in such a dramatic and exciting way.”

How Women Won The Vote With Lucy Worsley (1x90') was commissioned by Tom McDonald, Head of Commissioning Specialist Factual and Natural History and Charlotte Moore, Director of Content and the Commissioning Editor is Simon Young. It is being made by Brook Lapping where the Executive Producer is Emma Hindley.

Out of the tumult and fervour of the end of the 60s emerged a generation of artists who set out to start a revolution. As women around the world joined forces to fight for liberation, the formative art movement of the last four decades was about to explode into being. On both sides of the Atlantic, women were tearing up art history, reinventing the arena of art with experimental new mediums and provocative political statements. Questioning everything, from the way women were presented in magazines to the right to equal pay, feminist artists aimed to radically change the way women were perceived.

In LA Judy Chicago founded the first feminist art course and told her students to only study work by women. In London, Mary Kelly was causing tabloid outrage by displaying dirty nappies at the ICA while Margaret Harrison’s depiction of Hugh Heffner as a bunny girl, resulted in her exhibition being shut down by police, claiming it was offensive to men... Alongside interviews with Turner prize winner Lubaina Himid, Suzanne Lacy, Carolee Schneemann, Rose English, Laurie Simmons, and Barbara Kruger, The Great Art Fightback will tell the story of these revolutionary artists and celebrate the grit, humour and determination that wrote women back into art history, for good!

The Great Art Fightback (1x60') was commissioned by Cassian Harrison, Channel Editor BBC Four and Mark Bell, Head of commissioning, Arts and is being executive produced for the BBC by Emma Cahusac. The Executive Producer for What Larks! is Claire Whalley and the director is Clare Tavernor.

This special edition of the Antiques Roadshow, coinciding with the 100th anniversary of women gaining the right to vote, will uncover the sacrifices and celebrate the victories of the huge range of pioneering women who have shaped our nation. Specially selected guests will be invited to bring their treasured objects to our team of trusted experts, offering intimate portraits of groundbreaking women from all spheres, from medicine and science to engineering, adventure and the arts.

Antiques Roadshow is produced by BBC Studios. The Executive Producer is Gill Tierney and the Series Producer is Robert Murphy. It was commissioned by David Brindley

Emmeline Pankhurst: The Making Of A Militant

Sally Lindsay uncovers the crucial and leading role of Emmeline Pankhurst and her birth place, Manchester, in the fight for women’s suffrage. Emmeline’s own descendants feel her real story has never been told - the film includes her great-granddaughter Helen Pankhurst, who has agreed to uncover her ancestor’s amazing story. The programme features exclusive access to artefacts and unseen archive and behind-the scenes filming of the new statue of Emmeline, commissioned to mark 100 years since women secured the vote.

Emmeline Pankhurst: The Making Of A Militant (1x30') was commissioned by BBC Inside Out North West. The Executive Producer is Deborah Van Bishop. The programme is made by Saffron-Cherry TV.

The programme will be repeated on BBC Four on 18 June at 7.30pm.

PROCESSIONS, a mass participation artwork produced by Artichoke for 14-18 NOW, invites women across the UK to mark the centenary of women gaining the vote, with commissions by over 100 women artists.

It will be covered by News around the UK with local teams reflecting the build up to the big day on June 10 and World Service will be joining in too - looking at the state of democratic opportunity for women around the globe.

The men who backed votes for women. Suffrage campaigns were led by women but some men played key supporting roles. From male activists like Fred Pethick-Lawrence who was convicted and forcibly fed in gaol to MPs like John Stuart Mill and Keir Hardie who spoke out in the Commons. Without allies in the all-male Parliaments of the day women would not secure a change in the law.

Commissioned by Peter Knowles and produced by Gabrielle O’Neill

The Drama of the Suffragettes

A unique chance to hear extracts from some of the provocative plays written by the Actresses’ Franchise League and female campaigners which were integral to promoting the Suffragette cause in the Edwardian period.

Vivid portrayals of 'new women', these plays have rarely been performed since. They are introduced by Radio 3 New Generation Thinkers Eleanor Barraclough and historian Naomi Paxton and recorded in front of an audience at Radio 3’s 2018 Free Thinking festival in Gateshead.

BBC Radio 3’s Breakfast programme will launch 30 on 30, a new segment presenting a series of 30 well-known figures selecting music by a female composer they particularly admire, including choices by conductors Marin Alsop and Sakari Oramo and broadcaster Sue MacGregor. The series will run from Tuesday 6 February until International Women’s Day (Thursday 8 March).

The Pankhurst Anthem is a special choral work commissioned by BBC Radio 3 to mark the 100th anniversary of women’s suffrage, with music composed by Lucy Pankhurst and text written by Helen Pankhurst, based on words by her great-grandmother, Suffragette leader and political activist Emmeline Pankhurst.

The BBC Singers will perform The Pankhurst Anthem in an online premiere available to view on the BBC Radio 3 website from Tuesday 6 February. Radio 3 will present a live performance of the complete work at the station’s Free Thinking Festival at Sage Gateshead on Friday 9 March.

To enable audience participation and involvement, vocal scores of The Pankhurst Anthem will be available to download free of charge from the BBC Radio 3 website from Tuesday 6 February. Audiences will be encouraged to send BBC Radio 3 photographs of themselves learning and performing the work.

Throughout the year Woman’s Hour will celebrate the achievements of the suffragists and suffragettes and how the Representation of the People Act 1918 has changed women’s lives over the past 100 years. The programme will also look at modern activism and the issues women in the UK and around the world are still fighting for today. The “18 in 2018” cohort - a group of young women eligible to vote for the first time this year - will explore some of the key issues facing women today. From a diverse range of backgrounds, and including campaigners involved in modern day activism for issues including period poverty, rights for disabled children and anti-bullying, the group will explore some of the key issues facing women today and talk about their experiences, kicking things off with a special live programme on the day the act was signed.

Helen Pankhurst presents the previously untold story of one of the foremost Suffragettes, as she uncovers her grandmother Sylvia's role in the fight for Ethiopian Independence, and reveals a lifelong love for the fascinating country that became her home.

In #1918women BBC English Regions tells the stories of more than 40 suffrage pioneers and their links with local places on BBC Local Radio, regional television and online