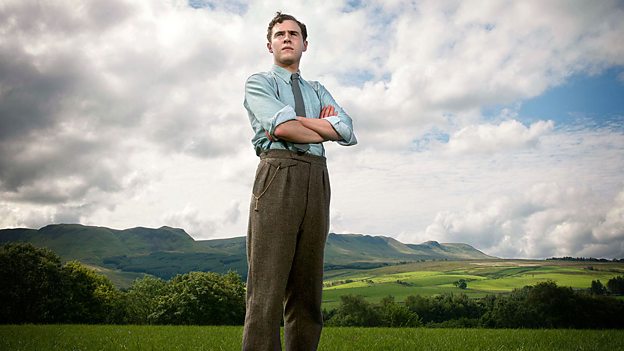 Can you tell us a little about how you got the part?

I had known about it for about a year before it actually started shooting. Initially, I met the producer and then because I was working on something else I couldn’t make the audition when they wanted to see me. In the end I came to it after everyone else but I think because I was working on something else I didn’t feel as much pressure at the audition as I might have done; I can have a tendency to think things to death. In the end I got the part, but because of the other job I came to Young Herriot quite late. I really have to thank Michael Keillor, our director, and Owen McPolin, our director of photography, who made the transition very easy for me.

Did you know much about James Herriot before? Had you seen All Creatures Great And Small or read any of the books?

I do actually have a connection with James Herriot because we went to school in the same area. I went to Hillhead Primary School in the West End of Glasgow and he went to Hillhead Secondary. I read a couple of the books but I think ultimately we all made a conscious decision not to watch the original series. This is a very different character and I wanted to make him as original as possible and not be too influenced by anything that had gone before.

Did you do any research on Herriot himself?

His son Jim wrote the biography of James Herriot and I had dinner with him a couple of times. His granddaughter Zoe also worked on the show in the art department. Between them they were really useful. I had a lot of questions for Jim but I also explained to him that while the original series was about 90% based on true cases, this series is about 50% imagination because there isn’t that much known about Herriot at that time. But both Jim and Zoe were really good; Zoe was always around and Jim came to the set a couple of times. What I really appreciated was that they understood I had a job to do and they respected that and left me to it.

How would you describe James as we meet him in this series?

He’s a very idealistic young man with a great heart and a great moral compass. He’s a bit wide-eyed and very eager to please but there is always good intent behind everything he does. If he gets things wrong then it’s for the best of motives but he always manages to pick himself up and do the right thing in the end.

The backdrop is one of urban deprivation in 1930s Glasgow; do you think that gives the stories an added dimension?

I do actually. I think there are a lot of things that the period setting brings to this show. For one thing there is the attitude to women at that time. Whirly is one of only two women in the whole college and James can’t quite understand that. The other thing we need to remember is that the show is set in a period where vet work was seen as a dying art. The rise of the motor car and increasing industrialisation meant that animals were no longer being used for work. In fact James Herriot almost reinvents the profession because he has a love for animals and a passion to do the right thing and that spreads to other people in the school.

How would you describe his relationship with Whirly and McAloon?

It’s a strange dynamic because they are all very different. Whirly for example is probably the best vet in the school but is being discriminated against and James can’t really understand that. But his arrival gives her something to fight for. Rob McAloon on the other hand appears to be something of a playboy. In those days even if you failed your exams you could stay on if your parents were prepared to pay your fees. He’s been there for five years and is still only in the second year. When James comes along all wide-eyed and enthusiastic he has a big effect on both of them. They are all different from each other but curiously I think that is what makes them click together.

They say you should never work with children or animals but you’re doing both here.

Did they provide any memorable moments during filming?

In the first show I am working with a puppy and it is supposed to lie quite still but as you can imagine there was no way on earth it was going to do that. It was all over the place so all I could do was try to keep up and remember my lines. The horses in episode one did exactly as they were told and were great to work with. I think the most surprising thing though was a dog that had to pretend to be ill in one episode and it was just terrific; it lay perfectly still, without moving, for about 40 minutes. I don’t think I could have done that.

You share scenes with Tony Curran and Gary Lewis, two formidable actors with a lot of big screen experience. How much of a learning experience was that you?

Of course it’s intimidating at first. It’s a wee bit scary to think of what these guys have done and who they’ve worked with but once you start to say your lines with them and rehearse scenes they put you at your ease. We spent a lot of time socialising when we weren’t shooting and they are both a really good laugh. I think that helps a huge amount because you create a team, you become a bit like a family and that makes the job a lot easier.